Millerton, NY, resident Jane Rossman grew up watching birds at the feeders her family set out near their house. Thus was born, at an early age, a love and passion for the beauty wild birds bring to our lives. “Later, I became more active by going on walks and trips with other local ‘birders’, like those at the Ralph T. Waterman Bird Club of Dutchess County, and the Audubon Center in Sharon, Connecticut.” Rossman says, “I enjoy nature and being outdoors, and birding provides a great combination of both. You can enjoy the birds in your yard from the comfort of your home, but active birding gets you outside to walk local trails, explore new habitats, and maybe even travel to some exotic places.”

Like others in the area and throughout the world, Rossman takes part in the annual Christmas Bird Count and the Great Backyard Bird Count, the latter taking place in Mid-February. The counts are joint projects of the Cornell Lab of Ornithology and the National Audubon Society and prove valuable to tracking the health of the populations of our feathered friends that, unfortunately, seem to be struggling in some areas of the country. David Grover, president of the Waterman Bird Club, said the current state of birds has shown a significant decline worldwide. “I can’t specifically say how much bird populations have declined in Dutchess County. But, the counts we take part in are important because they reflect the health of the planet as well as those of various threatened birds.”

Quite remarkably, there may be almost three billion fewer birds in North America today than there were in 1970, according to a study 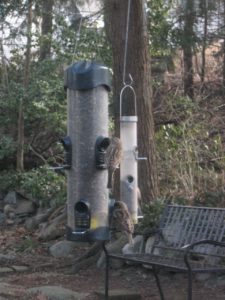 published in the journal Science. Researchers combined data collected over time from projects such as the North American Breeding Bird Survey, the Audubon Christmas Bird Count and the International Shorebird Survey to make their calculations, which looked at 529 species in the continental U.S. and Canada. They also looked at observations of nighttime bird migration flight captured on NEXRAD radar systems. The decline in North American bird populations over time works out to a loss of about one in four birds. The decline does not appear to be evenly distributed either—most of the drop-off observed by the researchers is attributed to just 12 species, including some sparrows and warblers. Researchers observed gains in the populations of other birds, mainly raptors and waterfowl species.

In a story by Karin Brulliard that appeared in the Washington Post in September of last year, it was reported that the decline in birds over the past five decades signals an “overlooked biodiversity crisis,” according to a study from top ornithologists and government agencies. Major “victims” include warblers, thrushes, swallows and other familiar birds. Ken Rosenberg, a senior scientist at the Cornell Lab of Ornithology and American Bird Conservancy, told Brulliard. “The generalist, adaptable, so-called common species were not compensating for the losses, and in fact they were experiencing losses themselves. This major loss was pervasive across all the bird groups.”

Research has documented several threats that could be responsible for the large-scale bird decline. Agriculture and habitat loss are thought to be the primary drivers, with other factors, such as light pollution that disorients birds, buildings that they crash into and roaming cats amount to something akin to “death by a thousand cuts,” Rosenberg said. Birds, because they are so well-monitored, should be viewed as canaries in coal mines, scientists argue —harbingers of a wider environmental malaise at a time when other creatures are also thought to be fading but are more challenging to count. David Grover says the data his club members and other birders collect throughout the year will help researchers better understand what is happening to bird populations. The club has a Bluebird Committee that monitors around four hundred bluebird boxes throughout the county. We allow many different species (wrens, swallows, and bluebirds) to nest in the boxes of our state bird. Many of our club members feed birds, especially during the winter, to help support bird population in their communities. 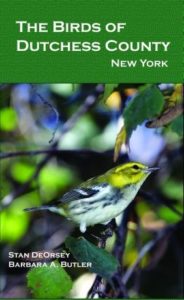 While the data from the Backyard Bird Count is still being compiled, some interesting data was available on the Christmas Bird Count. The most common bird sighted in Dutchess County was the American crow, no surprise there, with 14,000 of the birds reported by dozens of individuals who took part in the local count. The European starling and Canada goose also reported over 1,700 sightings apiece. The redwing blackbird appears to be in good stead with almost 900 sightings, while the house sparrow, dark eyed junco and white throated sparrow all had sightings of over 500, somewhat low numbers considering the birds were once very numerous. The Wasterman Bird Clubs as a body participates in the Christmas Bird Count, the winter Duck survey, the spring bird count and many members submit their daily bird observation on eBird (a website that allows individuals to keep a record on the birds they observe) check it out. The state of New York has started its Breeding Bird Atlas program that will take place for the next five years. The club has had a workshop training those interested in the program. Rossman said bird counts, whether the Great Backyard Bird Count, a Christmas Bird Count, or local waterfowl count, help provide scientists with records that stretch over decades allowing them to identify trends and changes over time and relate these to environmental changes.

For the first time this year, the Sharon Audubon Center in Sharon, Connecticut took part in the event. Audubon Staff were available to help visitors identify and count species at the Center’s bird feeder to submit for the count. Individuals learned how to identify common feeder species, while helping to collect data. Bethany Sheffer, Volunteer Coordinator and Naturalist for the Center said, “The Great Backyard Bird Count was not only a fun way to become familiar with regional bird species, but an easy way to contribute to meaningful scientific research that informs us of distribution and movements of species across the globe. The longer this data is collected, the better scientists will be able to answer important questions that relate to migration, reproductive patterns, disease, and the impact of climate change on populations.”

Rossman enjoys watching the activity of the local birds and observing the changes in birds species that occur with the different seasons. “There is always a bit of a challenge to find the birds and to see new birds which makes it fun. Traveling with and sharing information with other local birdwatchers adds a great social aspect and can lead to some wonderful friendships. Bird watching is a great hobby which is available to everyone and does not involve an extensive amount of expensive equipment.” Nature centers often offer guided bird walks, and in Dutchess County, the Waterman Bird Club offers programs and conducts weekly bird walks which are free and open to the public. Beginning birdwatchers are always welcome. Club members share their skills and help everyone see and learn to identify the birds found.

Said Grover, “The club plays an important role in the county when it comes to the health of bird populations.” The club, which has around 200 members, sponsors hikes on Wednesday for both members and the public. Said Grover, “We welcome all new individuals and provide them with club information, our club newsletter and bird checklist.” The club has six membership meetings that are also opened to the public involving a speaker with a slide presentation on a birding trip. “Our education committee books a number of events within the county where they will discuss birds, birding, attracting birds, feeding birds along with birding walks. These events involve schools, libraries, garden clubs, etc..” According to Grover, people can promote healthy bird populations by creating suitable habitats around their homes. “Support organizations like Audubon, Nature Conservatory and others that help maintain natural habitats for wildlife. Education about our natural world and what is happening to it helps birds and all living things.”

You can purchase feeders, bird houses, watering stations, seed and other foods at various locations, including big box stores. For instance, 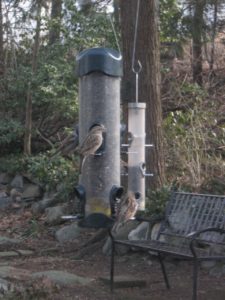 Agway has a comprehensive array of feeders (ranging in price from $30 to over $100) and sells quality seeds in bulk, which cuts down dramatically on the cost of the hobby. Various seeds attract different birds. One of the prettiest of all visitors, the American goldfinch, loves thistle, and there are special feeders that hold the seed. Sunflower seeds attract a wide range of birds; woodpeckers and nuthatches love suet cakes; and mixed seed is good for ground feeders. Also, it may seem like a small piece of the puzzle to an individual pet owner, but keeping your cat inside and not letting it out to hunt birds, which, after all, is its natural instinct, can also cut down on the decline in backyard bird populations.

Barbara Butler and Stan DeOrsey, long-standing members of the Ralph T. Waterman Bird Club, co-authored The Birds of Dutchess County, New York, which was updated in 2017. The authoritative source on local birdlife, the book documents the current status and history since 1870 for all 323 bird species that have occurred in the county. Each species account includes historical distribution, migration dates, nesting dates, flock sizes, and much more. The authors meticulously researched the extensive records maintained by the club as well as many older documents not readily available. While the original hardcover book is sold out and there are no plans to publish a second edition at this time, the work will be updated on an ongoing basis to maintain its value as a reference.

For more information about birding, events and the book The Birds of Dutchess County, check the club’s website watermanbirdclub.org