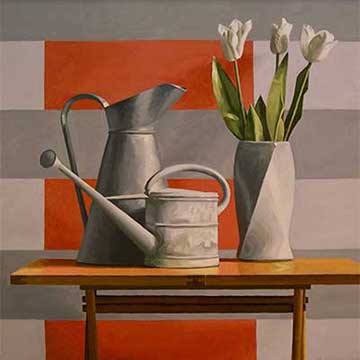 If you are a regular Main Street Magazine reader, you will likely already know something about Carrie Chen. Perhaps you have worn one of her beautiful Casana Designs cashmere scarves or sipped tea at her former tea house in Hillsdale, NY. Perhaps you have stayed at her exquisite Bed and Breakfast, The Barrington in Great Barrington, MA, and perused the Carrie Chen Art Gallery on Railroad Street. There is no doubt that Carrie Chen is a well-known and successful local entrepreneur.

Throughout all of Carrie’s endeavors and accomplishments a few themes remain consistent: social and environmental responsibility and artistry. As an environmental space designer for a successful Seattle firm, Carrie designed water filtration systems. As an interior designer, Carrie focused on Feng Shui, creating positive energy and flow in each space. As a fashion designer and retailer Carrie ensures a sustainable process and the wellbeing of her artisans. As a gallery owner, Carrie is committed to supporting and highlighting local artists.

The upcoming exhibit at the Carrie Chen Gallery features two long-established local artists who have exhibited throughout the country, while forming deep roots in the Hudson Valley and Berkshires communities. Hagin works in one of the oldest visual genres, still life. Her paintings feature delicate fabrics, lush flowers, and traditional domestic objects, beautifully rendered with painstaking detail. Niccolls works in the abstract, prioritizing phenomenal luminosity and a color palette of blues, grays, greens, and ochres. Though the pairing of two artists with such distinctive styles may seem an unconventional choice, Carrie believes that viewing their works together leads to a richer experience. Hagin and Niccolls share a color palette, an emphasis on light, and a meticulous approach to craft.

We had a chance to catch up with both artists and preview their work before the show’s opening on January 28 at the Carrie Chen Gallery in Great Barrington, MA.

Every sensation I’ve known can potentially find its way into my paintings. The colors, shapes, and textures in them have qualities that I have perceived, or that I remember, even fleetingly. This happens whether I intend it or not. My work arises from a fascination with structure. Each  painting establishes its own unique context, or world. It may have elements that evoke still-life, landscape, or portrait painting, or some combination of any of these, or perhaps something else entirely. I want to sum up the  mood of being in a place and time, whether it is distant or close, whether it is in the past or now.

I was born in Texas. Eventually, I studied art in a semi-formal setting at the School of the Museum of Fine Arts in Boston. At that time I was making paintings about certain kinds of space, especially the spaces remembered from childhood in the southwest. Through the influence of my teachers and exemplars, my work gradually focused on other ways of seeing, exploring color, form, light, and more. The paintings needed to be “abstract,” in the sense that they should visually refer [as much as possible] to their own internal logic and context. This approach continues to the present. A Master of Fine Arts degree was awarded to me at the University of Massachusetts in 1997.

Describe the type of work you do and the mediums you use.

I make abstract paintings, using mostly oil paint. The support is most often stretched canvas, but I also work on panels and occasionally on paper.

How do you develop your art skills?

By looking. I spend a lot of time looking at paintings, whether they are made by another artist or they are made by me. A great deal can be learned from that. Experiments in the studio are another way I learn. Mostly, I learn by doing.

Who are your biggest artistic influences?

It is hard to name just one influence… Giorgio Morandi’s work has been in my mind for many years, but the works of Philip Guston, Paul Cezanne, Richard Diebenkorn, Amy Sillman, Friedel Dzubas, Henri Matisse, Lee Krasner, Piero Della Francesca, and many, many others have had an impact on my work.

Describe how where you live affects your work.

The Hudson River valley, where I live, is a very beautiful place to be. It has inspired artists since at least the early nineteenth century.

What, besides art, brings you joy?

I am a still life painter who works from direct observation. I paint familiar objects and situations in my immediate environment. Setups can occur spontaneously or take a very long time to arrange. Sometimes, I’ll lurk in my studio for days in search of the next idea or situation. I love the light and the ambiguities of perception. It’s a puzzle to decipher certain visual situations. I came out of school in the Abstract Expressionist era. I frankly hoped my work would move in that direction. My first teaching job required that I teach basic painting from an observational point of view. I had never worked that way and in order to teach it, I began to try working that way. Bit by bit, I became fascinated by the mysteries of appearance. It was the late 1960s and painters like Philip Pearlstein, Jack Beal, Fairfield Porter, and Jane Freilicher were involved in something called the “New Realism.” Even my own Yale contemporaries, like Janet Fish, Rackstraw Downes, and Chuck Close were starting to paint from direct observation. I continue to paint that way. I work half the year in watercolor in my upstate studio and the other half in acrylic on canvas in the NYC studio. I like the change of pace that alternating the two media give me.

I was born in New Jersey, in 1940. I received a BFA degree from Carnegie Mellon University in 1962 and a MFA from Yale University in 1964. From there I went to the Maryland Institute of Art in Baltimore to teach for nine years, with one year off for a Fulbright Grant to Rome, Italy 1966-67. In the 1970s, I moved to New York City and began teaching at the Pratt Institute, Fashion Institute of Technology and later, the Cooper Union. I retired as an Associate Professor from FIT in 2006. After group shows in the DC/Baltimore area and at the Alpha Gallery in Boston, I had my first New York City solo shows at the Terry Dintenfass Gallery in 1975 and ’78. Alpha Gallery continued to show my work and gave me nine one-person shows through 2000.

In 1980, I began a long association with the Fischbach Gallery in NYC that lasted until the gallery closed in 2015. I had 19 one-person shows there. Besides the Fulbright Grant, I won a New York State Grant and two National Endowment Grants. I was elected to the National Academy of Design in 1992. I continue to live and work in New York City. Since 1983, I also spend a good part of every year near Hudson, NY.

Describe the type of work you do and the mediums you use.

I’m a still life painter and I work in either watercolor on paper, or acrylic on canvas. I paint from direct observation of objects or situations in my immediate environment.

How do you develop your art skills?

I had a great art school education beginning with Carnegie Mellon University and concluding with graduate work at Yale.

Who are your biggest artistic influences?

Vermeer, Hopper, and Morandi have probably influenced my work the most.

How does where you live affect your work?

It affects me very much. I live in a small loft in mid-town Manhattan from mid-November through May each year. From June back into November, I’m at my house in rural upstate New York. There, I have a light-filled studio in a barn and beautiful gardens situated on a creek. I’ve been doing this back and forth since 1983. My NYC studio is set up for me to paint acrylic on canvas and the barn studio is set up to do water colors. It began as a logistic decision, but I grew to like and look forward to the division of methods.

Is art important to society?

I think it is, but not always in demonstratively obvious ways. Think of our world without the cave drawings, or Michelangelo’s exquisite David, or Van Gogh’s dazzling images? Think also of a world without music or literature? What kind of world would that be?

How do you define success as an artist?

Fame and fortune would be nice, but more important is being able to live the life of a working artist. It’s wonderful to be able to pursue one’s dream. I survived financially on adjunct teaching and some showing and selling of work.

Besides art, what brings you joy?

I’d say: gardening, food, friends and pets. In my youth, I loved to travel but now I’m happy to be at my two homes. 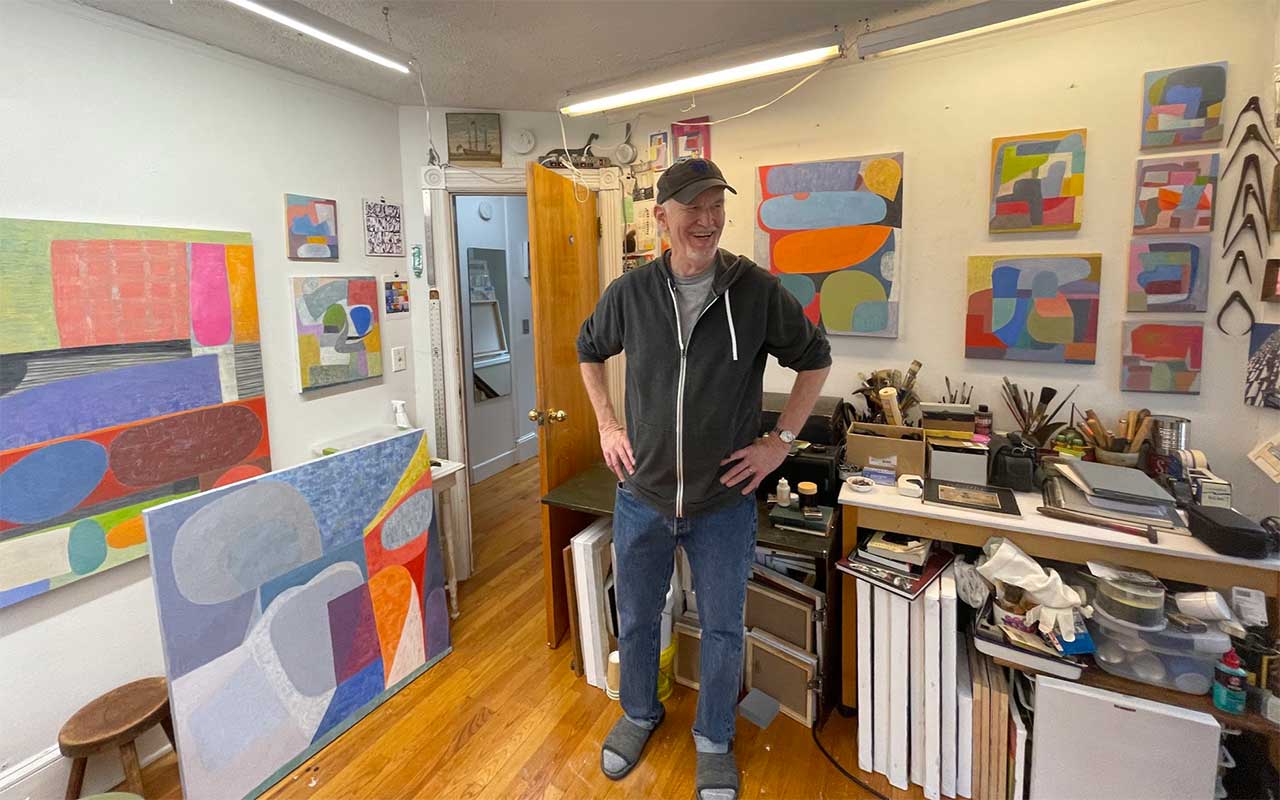