A Wine Store You Can Sink Your Teeth Into

“A meal without wine is like a day without sunshine.”

No wonder that it was a Frenchman who is credited with declaring this obvious truth. One could argue that the Italians are equally obsessed with wine and food, and that, yes, it’s a universal thing (it is!). But I’m partial to the French, so Brillat-Savarin’s quote not only rings true for me, but its “Frenchness” feels entirely appropriate.

Prejudices for France and the French firmly in place, it was with delight and a sense of awe that I pulled up to Le Caviste in Standfordville, NY, on a sunny Sunday to meet with its proprietor, Antoine Lefort(pictured above). The sunny, cozy store with its contemporary country feel – walls painted white, simple yet sturdy metal-and-wood shelves, hammered metal symbols of animals above the shelves – is utterly charmant, and there isn’t a wine in it that you wouldn’t be thrilled to take home to dine with. And that’s the concept behind this wine store, that what you will be eating is intrinsic to the wine you should be choosing. Absolument, that is the very best way to enjoy wines. “For the French,” Antoine said, “that is the way it’s done.”

Le Caviste opened in April, 2021. Antoine and his family (“I have two jobs, four kids, and 16 bunnies,” he told me with a smile) live in New York and in Dutchess County, and he’d had his eye on the building for some time. When it became available, he started putting together his selections around his way of thinking about wine – as a pairing for foods.

“I grew up in the north of France,” he said with his very pronounced French accent, “drinking wine, of course. When I was 18, I traveled across the country stopping in the wine regions – Champagne, Burgundy, the Rhône valley, Bordeaux – and I learned so much. My father, and my father-in-law, both had big cellars, and wine was always an occasion,” he continued. 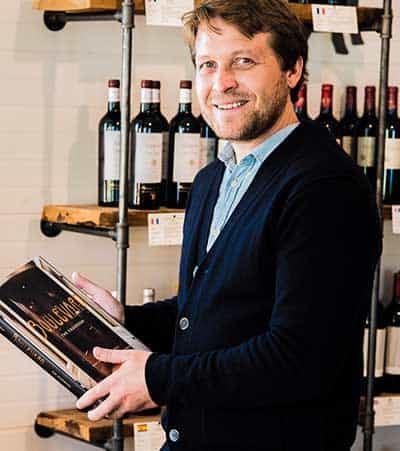 His career started in Paris, but he and his family moved to New York nearly two decades ago to pursue his job in finance. “I discovered New World wines when we came to the US,” he said, “and I came to appreciate the differences between them and the wines of my country.” He also recognized that wine stores here were very much about selling selection, and that the experience was typically overwhelming for someone who was looking for something meaningful.

“In France,” he said, “there’s a wine store on every corner. A caviste, as the stores are known, operated by someone who knows the wines and can make recommendations based on your personal preferences. Someone who gets to know you and what you like. The caviste takes the guesswork out of your choice and becomes an ally and a friend. How can you choose a wine without food in mind?,” he wonders aloud.

It’s true. But how is it that someone else can make this most intimate of choices for you? Think of it this way: You’re having a dinner party and you’ve planned the menu. You think about the predominant flavors in your dishes – spicy, or meaty, or earthy; red sauce or cream sauce or no sauce; light or heavy. What are the best wines to complement the flavors in so many different kinds of foods? As the host, how would you know what’s best if you haven’t tried many, many bottles of different varietals and even blends from different parts of the world? Often we’re comfortable with the food we’re preparing and simply take chances with the wines to serve. We fall back on the old Rule of Thumb: If you can put lemon on it, go with a white wine. A big red with meat. Champagne if it’s a special occasion. Then we decide how much we want to spend when faced with an overwhelming selection, often thinking more about how or whether we want to impress our guests than whether the wine is the best pairing.

The pivotal role of selecting a good wine to pair with a good meal is an important consideration, but can be quite intimidating. What a pleasure, then, to have someone who has made it part of their everyday life and learning to help make the pairing choice for and with you. “There is no wine in this store that I haven’t tasted,” Antoine said with pride. “I’ve learned about grape varietals, I’ve learned about distinctions that winemakers want to express. I’ve learned about what’s been coming out of different parts of France and the world, and I continue to study and learn. There are wines here from Italy, South America, Spain, and of course the United States. To enjoy what’s out there you have to educate your palate,” he stated.

Learning is part of the pleasure

He shows us some of the books he especially likes, including Boulevard: The Cookbook, by Lisa Weiss, Nancy Oakes, and Pamela Mazzola. Oakes and Mazzola were the chef and chef de cuisine of the San Francisco restaurant, Boulevard, that helped define that city’s culinary scene. Interesting that an Old World wine guy loves a New World cookbook, but that’s the world of food and wine. Antoine includes references to favorite dishes that he would pair with certain wines so that others get inspired. “People come in to talk about wine, of course,” he said, “but they also love to talk about food. And so do I!”

Another of his much-loved classics is The Food and Wine Pairing Guide by South Africans Katinka van Niekirk and Brian Burke. Published in 2009, the slim book has become a seminal reference for food and wine enthusiasts worldwide. It’s abundantly clear that Antoine takes his choices very seriously. He is also a fan of Jordan Mackay, a James Beard Award-winning writer and author of, among others, The Sommelier’s Atlas of Taste: A Field Guide to the Great Wines of Europe.

“I strive to offer a curated selection of wines that are hard to find anywhere else,” Antoine shared as we went around the store and he showed me how he displays the wines, with their countries of origin, the grapes they’re made of, some tasting notes, a suggested recipe, and the price. Every selection is mouth-watering and evocative in the way that a wonderful dinner party can be: A welcoming table at which guests with varied backgrounds are seated in ways that will maximize conversation and engagement; food that is delicious but not ostentatious; and wines that bring the gathering to life.

Being in the store is like being surrounded by Antoine’s closest friends. You want to get to know all of them, but you only have so much time. I can’t help but wonder if there’s a wine he likes as an all-around go-to. When I ask, he admits he’s partial to a 2017 Irancy by Gabin et Felix Richoux. The wine is from Yonne in northern Burgundy, and is 98% Pinot Noir and 2% Caesar – “delicious and affordable,” he said.

Antoine opens bottles to do a tasting for customers at the store every Saturday, and he does change up his selection. He meets regularly with his distributors and does private tastings with new customers to assess wines before deciding to carry them. “The chances that a wine I help you select will please you and your guests are very high,” he stated matter-of-factly, and I didn’t doubt it. “You should try a wine more than once,” he noted. “It can taste different on different occasions and, of course, with different foods. There is so much to learn – and enjoy,” he said.

Knowing this article would be in the November issue, with the greatest food holiday of them all on Thursday the 25th (Thanksgiving), I couldn’t help but ask for his recommendations. “The Irancy,” he said right away, “or perhaps a lighter Gamay, which is what a Beaujolais is made with,” he continued. “If you want to go white, a Chablis. I’d have to suggest a Bordeaux, too,” he said, “preferably a Margaux as it’s more subtle. There’s more Cabernet Sauvignon and less Merlot and Cabernet Franc, which tempers it down,” he said. “You have to wait a good ten years for a Bordeaux to be at its best,” he added. And what would he suggest to pair with the classic pumpkin or apple pie so typical of a Thanksgiving dessert? “I’d go with a Jurancon from southwestern France,” he said, showing me his choice. “It’s sweet but has some acidity.” Without knowing it, he struck a chord with me, as Jurancon is in the foothills of the western Pyrenees, where my great aunt settled because it reminded her of the countryside in China, and where my mother currently lives.

As I leave with my bottle of Irancy and, believe it or not, a Provençal rosé in a can called License IV, which Antoine claimed was “delicious and well worth it,” I only wish I lived closer to Stanfordville so I could frequent Le Caviste regularly. It’s wonderful to know that a passion for pairing wine and food has been brought to life at this location spécial. And remember, la vie est trop courte pour boire du mauvais vin.

Visit Le Caviste at 2256 Bulls Head Road in Standfordville, NY. Learn more at www.lecaviste-ny.com, or email Antoine at info@frenchiegrape.com. Store hours are Monday-Thursday, 3 to 6:30pm; Friday 11am to 7pm; Saturday 10am to 6:30pm; and Sunday noon to 6pm. 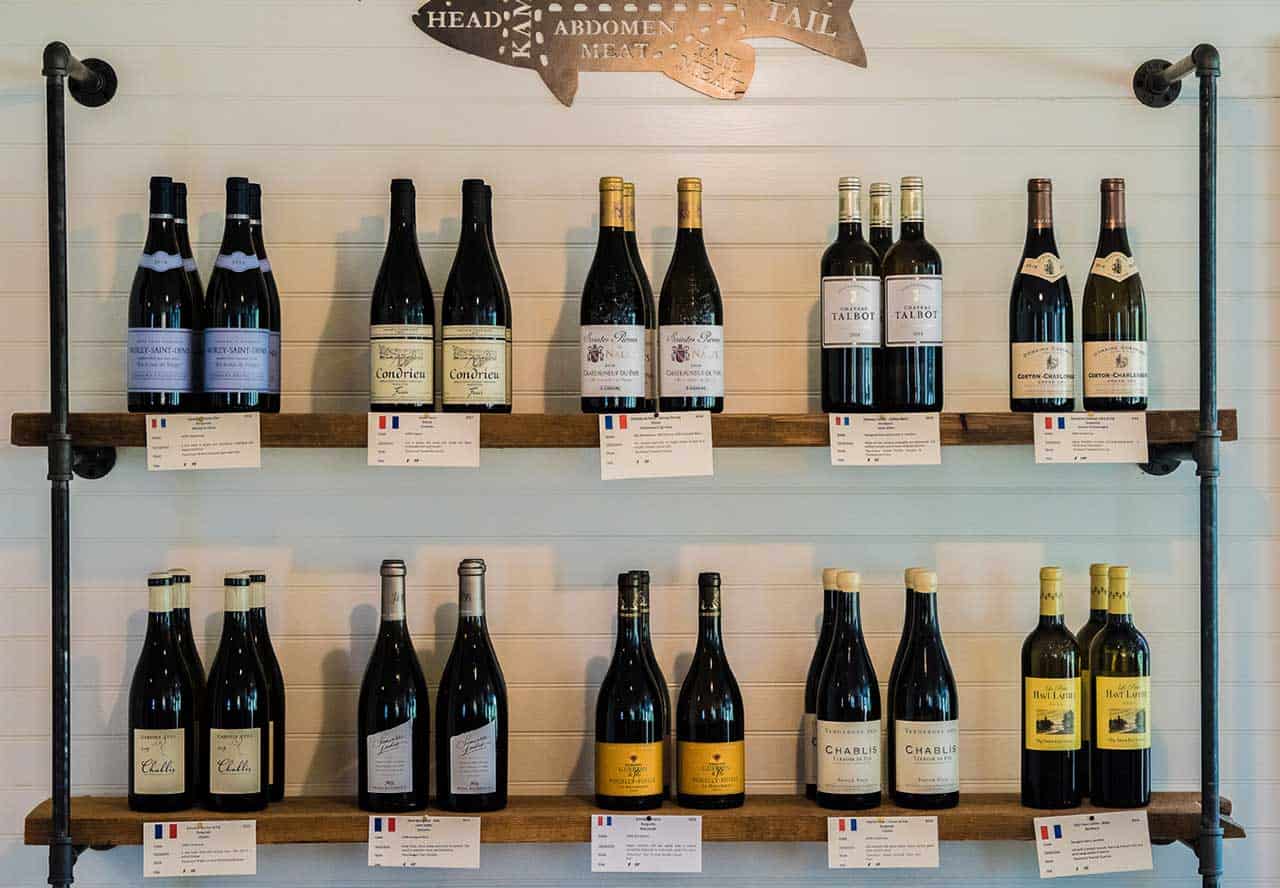