When coffee beans are picked from the stems of plants and removed from their protective coverings, they are green, tasting something like grass if they have any taste at all, and fibrous. The two species that dominate the coffee market, Arabica (coffea arabica) and Robusta (coffea canephora) did not rise to the top in their field (of 120 species) as exceptions to that reality.Whether the esteemed Arabica or the runner-up Robusta, which now represents 40% of global cultivation, no juvenile coffee bean has anything like the youthful reputation of a crisp, fleshy green olive, a cinematically celebrated green tomato, or a sparkling green vino vinho. The young among coffee beans are relentlessly unpalatable. Or, as an English roaster from Lincolnshire with Shakespearean tendencies puts it, “…an unroasted bean is fairly useless … it’s but a bean.” In fact, no matter their age, coffee beans aren’t even beans; they are fruits with a seed that we call a bean and botanists call a drupe. Which is presumably why “bean” was never challenged as the accepted misnomer.

What makes coffee taste like coffee is the roasting of the bean. First, however, the bean must be released from its pulp and peel via a wet or dry “washing,” which happens back on the farm or at a separate facility, leaving behind natural, developing flavors, from fresh to fruity to funky. Once the emancipated seeds have been shipped to the roaster the intricate business of creating highly nuanced flavors and aromas has begun. The qualities brought forth during roasting are what transport the beans from irrelevancy in our daily lives to the passionate necessity of our morning routines. 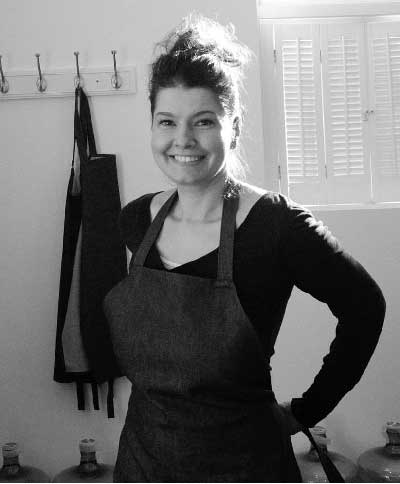 Roasting is nonetheless the one thing that Samantha Sapienza, inspired founder of ALL THAT JAVA, decided early on not to attempt. Knowing what you don’t want is, in the familiar words of Stanley Kubrick, half the battle. What Sam wanted instead was to begin her business with partner Patrick Madden and serve her custom-blended coffees to her eager, welcoming clients. Local roasters are numerous, like Winchell Mountain, a fixture in Millerton since 1973, which roasts beans from Ethiopia and Burundi to Costa Rica. But Sam’s romance remains true to Seattle, where she lived for 15 years, working as a portrait photographer and raising her three sons with her musician husband. Her mission has been to bring her coffee’s western “vibe,” out east and to focus on her brand and her customers. Putting all of that into play, she turned to Dillanos, outside Seattle, a big roasting company servicing coffee vendors, distributors, and friends of caffeine in general, worldwide. When Sam told her newly acquired roaster rep, Alyssa, she wanted coffee that would taste bold and smooth, Dillanos presented her with dozens of blends from which to choose. The basis of her business, what she would pin her reputation to, became a mix of beans from Brazil, the largest global producer of coffee, the highlands of Papua New Guinea, and Central America (usually Guatemala). The next step was straightforward: the beans are poured into a spinning drum where airflow and heat, set at about 430° F. for her medium roast, combine to create the ALL THAT JAVA house blend. Time to make coffee!

The birth of a brand

But first there was the question of branding, and Sam’s approach has been an ingenious one. Establishing a house blend is a norm, allowing people to make their personal statements. Sam’s blend, however, is brewed and sold from a series of “tiny houses” – literally an 8’ by 12’ room, or 96 square feet. Sam’s innovative concept, selling coffee out of miniature versions of the coffee bars and coffeehouses she’d encountered elsewhere, minus the furniture, was inspired by her surroundings. On trips to Rhinebeck to visit her family, Sam began noticing how much she missed the habit of stopping spontaneously for coffee as she moved through her Seattle days of errands, appointments, and shuttling children to and from school. Why not, she began thinking, open a suite of coffee spots specifically suited to the dimensions of the small towns and villages here in the Hudson Valley?

In 2016 Sam opened her Rhinebeck shop, a tiny-plus-some space designed to accommodate grinding and brewing, as well as display-shelving and a few tables for one. It’s not a hang-out, it’s a stop-in and move-on. Located on leased land with no water supply in a half-hidden yet central part of town, it embodies a pared-down aesthetic and friendly attention to the bond between people and their coffee. Her business plan was within sight. “I was always going to have multiple locations where I could spread happiness.” Key to Sam’s own happiness has been her business and personal partnership with Patrick, an artist whose career in San Francisco was in marketing. Soon a second outpost, an ALL THAT JAVA mobile unit, was showing up on the Walkway Over the Hudson or Windham Mountain Ski Resort in the Catskills. Today tiny ALL THAT JAVA coffee kiosks have been installed in Kingston’s Hannaford Supermarket – another feature of Seattle’s coffee culture is the availability of coffee while you grocery shop – and added to the village street life of Millbrook and Tivoli.

Whether dashing to the open window of Millbrook’s ATJ hut, on a postage stamp of land behind Barbaro’s restaurant at Franklin and Church in Millbrook, or walking over from the pharmacy or hardware store, customers get in line for quality. The coffee takes up more space than the solitary counter clerk. The coffee beans are the same for lattes, cappuccinos, macchiatos, long Americanos, mochas, drip, iced…and even espressos, which differ from regular coffee in brew method only, using pressurized water and a fine grind. Decaf is also on the menu, as are such signature coffees as the nearly eponymous Frappienza, a frozen cappuccino, and Zoda, made of espresso enlivened with seltzer.

The cobbler has no coffee

I asked Sam about her own coffee habits and was not surprised to learn – this is the cobbler’s children have no shoes story – that Sam and Patrick have no coffee maker at home. No French press, no Chemex, no nothin’. “I go straight to the shop [in Rhinebeck] and begin my day with whatever coffee appeals to me in that moment. Right now, it’s an iced latte made with oat milk.”

And does she ever reheat her coffee in, well, a microwave, I asked, feeling like an unwashed green coffee drupe. Her answer was direct and gentle: “I try not to, as heat destroys the intended flavor profile. What I do instead, especially in summer, is take coffee I’ve let become lukewarm and make iced coffee with it.” This struck me as genius, taking your forgotten coffee in the direction it’s already going. Sam’s final tip made my morning: “Make your favorite coffee and freeze cubes of it in old-fashioned ice trays. Your coffee will retain its character instead of being diluted by plain water.”

Ah, and speaking of water, how does she manage to make coffee without connecting to the town water supply? ALL THAT JAVA is made with 100% Poland Spring bottled water. As roasters say, the art is developing flavor, the science is repeating it. A cup of ALL THAT JAVA coffee will bear repeating, tasting the same, with Sam’s blend and consistent water, no matter where you find it.

To learn more about ALL THAT JAVA feel free to visit them in person at one of their numerous locations or visit them online at www.allthatjava.net. 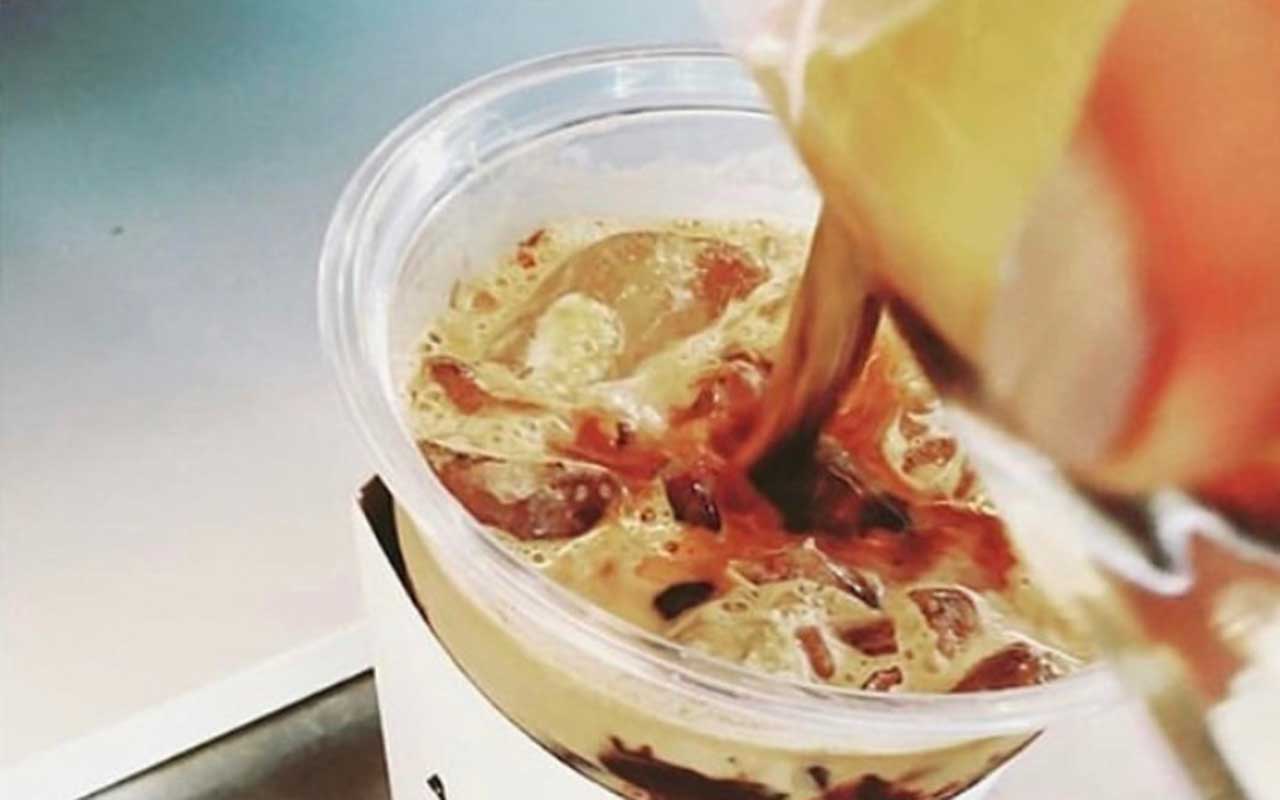