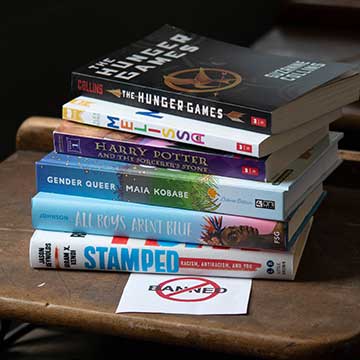 Book censorship, especially in recent years, has become an increasingly prevalent topic in both national media and local regions where book challenges have arisen. According to Unite Against Book Bans, an American Library Association (ALA) initiative dedicated to standing up against book censorship, “there were more censorship attempts in 2021 than at any time since the American Library Association began tracking more than two decades ago.” This same source notes that in 2021 alone, the ALA kept track of over 700 cases in which materials in libraries, schools, and universities were challenged. It is difficult to refute, then, the gravity of this problem today, and the importance of celebrations like Banned Books Week, which will be taking place this year during the week of September 18-24. Insights about how book challenging is manifesting itself today and the many implications of book censorship are equally significant in today’s climate.

Suzanna Hermans is the co-owner of Oblong Books, which has locations in Millerton and Rhinebeck, NY. Having celebrated Banned Books Week at Oblong for as long as she can remember, Suzanna noted, “Our number one question from customers was, ‘Oh, are books still banned? Is this a thing that happens?’ And the answer has always been yes.”

While these challenges and bans happen every year, as Suzanna described, it seems like this topic has just now come to the forefront because of some recent cases that are drawing attention across the country. Rhiannon Leo-Jameson, who is the director of the NorthEast-Millerton Library and has worked there for 12 years, pointed out, “I’ve been in libraries for 17 years, and this is the first time you’re hearing about it more outside of the library circle.”

Suzanna directed me to one case in Virginia, which is detailed in a June 1, 2022, press release from the ALA entitled “Library, author, bookseller groups condemn legal action attempting to censor books in Virginia.” This release denounced an attempt by a Virginia congressional candidate and Virginia delegate to question the legality of selling Gender Queer: A Memoir by Maia Kobabe and A Court of Mist and Fury by Sarah J. Maas in Virginia based on obscenity claims. The ALA’s release highlighted that “[t]his legal action could profoundly limit the availability of books in the Commonwealth of Virginia. No book has been banned for obscenity in the United States in more than 50 years.”

PEN America is an organization celebrating its 100th year of defending freedom of speech through writing and expression. It reported in a press release on August 1, 2022, that Utah’s largest school district, the Alpine District, had moved to ban 52 titles from its libraries, with 42% of these books presenting LGBTQ+ topics/characters. As of August 11, an update to this release noted that these texts would only be restricted for the time being, not banned, considering the students’ right to freedom of speech.

PEN America sent out another press release on August 5, reporting that the Collier County School District in Florida put digital and physical warning labels on more than 100 books in the district’s library. According to PEN, a notable proportion of these titles involved LGBTQ+ characters and the experiences of people of color.

A CNN article released on August 17, 2022, by Andy Rose and Elizabeth Wolfe reported that in the Keller Independent School District, located near Fort Worth, TX, books that have been challenged in the past year are being temporarily taken off the shelves for review in light of updated guidelines. The article, “A Texas school district is removing and reviewing dozens of challenged books, including the Bible and an Anne Frank adaptation,” explains that if the books align with the new policy, they will be returned to libraries, according to a statement from the district.

In this area, it might come as a surprise that challenges can occur here, too. While it is much rarer in this region, when I spoke with Suzanna, she mentioned a case she knew about in the Hudson Valley. When I looked into it, not only did I find an instance in Wappingers Falls, NY, but another case right across the river in Marlboro. According to a Hudson Valley Post article, “New York Students Blast Hudson Valley School for Banning Book” by Bobby Welber, this spring, Gender Queer was banned by the Wappingers Central School District due to sexual images. While discussing the book, Suzanna explained, “If you read Gender Queer, it is actually the sweetest, most wonderful memoir of sort of figuring out what it means to be a nonbinary person. It’s really an incredible book, and really sweet, and it does have a few explicit images in it. Sure, it absolutely does. But does that override the value that the book brings?”

Additionally, in a Southern Ulster Times article, “Marlboro bans two books from high school,” Mark Reynolds writes that in February, titles Dear Martin by Nic Stone and The Poet X by Elizabeth Acevedo were banned by the Marlboro School board. A month later in a follow-up article, “Board approves books, blames media,” Reynolds writes that these titles were later approved by the board after community members rightfully spoke out against the initial decision. It is clear, then, that this issue is not isolated to just certain parts of the nation.

A common thread throughout all my discussions on this topic was that it is highly concerning that books representing the LGBTQ+ community, people of color, and marginalized groups who have spoken out about their lives are being removed from shelves. The consequences of this censorship are damaging for everyone.

“I think so much of what we are seeing happen – it is fueled by parental fear of exposing their kids to the existence of queer people, and the existence and the lived experiences of people of color. And it’s one thing if a parent decides that their own child can’t read something. Okay, fine. But it’s when that parent says, ‘No child should be able to read this’ – that is where we’re encountering this censorship,” Suzanna explained.

Adding on to this, Rhiannon stated, “We all have to remember that we get to make personal choices for ourselves and sometimes our families. You don’t get to make them for everybody.”

This concept is especially relevant considering my discussion with Jen Segalla. Jen is transitioning into the Salisbury Central School library this year, and out of the English/Language Arts (ELA) classroom, after getting her master’s degree in Library Science. She noted the Freedom of Information Act (FOIA), a federal law which “ensures that all patrons of a library – whether it’s a public library, a college library, or a public-school library – have the freedom to access any information that they want.” Whether this be a young student or an adult, this right applies, and plays an important role in discussions about censorship. As Jen illustrated, not only does censorship restrict the freedoms of people wanting to read these books, but it also attacks the communities of people whose stories are being shared through literature. “They’re trying to deny the true issues that are faced by marginalized communities. So, it’s sort of just the microcosm of the nation as a whole, right? Like, ‘Let’s ban this book because it portrays a situation that’s happening all over the country, and we don’t want to deal with it,’” Jen explained.

Rhiannon shared these same sentiments: “Representation matters. Everyone should be able to see themselves in a book somewhere and be able to see every facet of their life. Books are kind of a safe haven. If you can go and you can read about different things and have that barrier that it’s not happening to you necessarily, and you can explore different facets of your personality, or what you think could be a part of your personality without fear of judgment – it’s so important. I really wonder why people would try to [censor these books]. It’s heartbreaking.”

Can’t you just go buy the book somewhere else?

Sure. With “banned” essentially becoming a book category of its own, with lists of banned books readily available online, and with banned books displays seen in libraries and bookstores, the concern with book censorship in a time of the Internet coupled with this sort of “banned books” enthusiasm might make the issue sound “overstated.”

However, this is far from the truth. The restriction of freedom the situation creates can be extremely harmful, and of course, cases like that in Virginia go beyond the scope of just a one-off book ban. Not only are the experiences of marginalized communities often targeted in this censorship, but accessibility becomes a huge concern as well. Suzanna underscored, “It’s still really important that we fight these bans because there are a ton of kids who aren’t going to find out about that book, who won’t learn about it because you took it out of the library – kids who need it. Kids who don’t have access in other ways, they don’t have a library within walking distance or their parents don’t take them to the bookstore.”

Furthermore, this can severely impact education and the capacity for teachers to discuss significant topics. Jen, while clarifying that she fortunately has not encountered any of this in her district, explained, “If you’re an ELA teacher in high school or middle school and you want to teach The Hate U Give [by Angie Thomas], or you want to teach Dear Martin, you might have someone say, ‘No, that’s on our list of books you can’t go over with the kids.’ You definitely lose teaching moments when books are banned.” Sacrificing the potential for powerful, meaningful conversations simply because literature covers difficult subjects, Jen noted, is extremely detrimental to students’ learning experiences.

Banned Books Week and beyond

All year round, you can take part in the fight against book censorship. Suzanna recommended keeping the discussion active if book challenges happen in your own community and speaking out to ensure people know it’s happening; you can also report challenges and bans on the National Coalition Against Censorship website (ncac.org). Rhiannon observed the importance of reading the books in question to know them first-hand, and participating in local elections, as positions on the town-level and board-level are the ones typically making the decisions about book challenges. Jen pointed out that reading diverse books, keeping an open mind, and supporting children in choosing what they want to read are all pivotal steps you can take.

To learn more about Banned Books Week and how you can participate, go to bannedbooksweek.org. Visit the American Library Association’s website at ala.org, the ALA’s Unite Against Book Bans initiative at uniteagainstbookbans.org, and PEN America’s website at pen.org for more information, updates on this topic, and more ways to get involved. 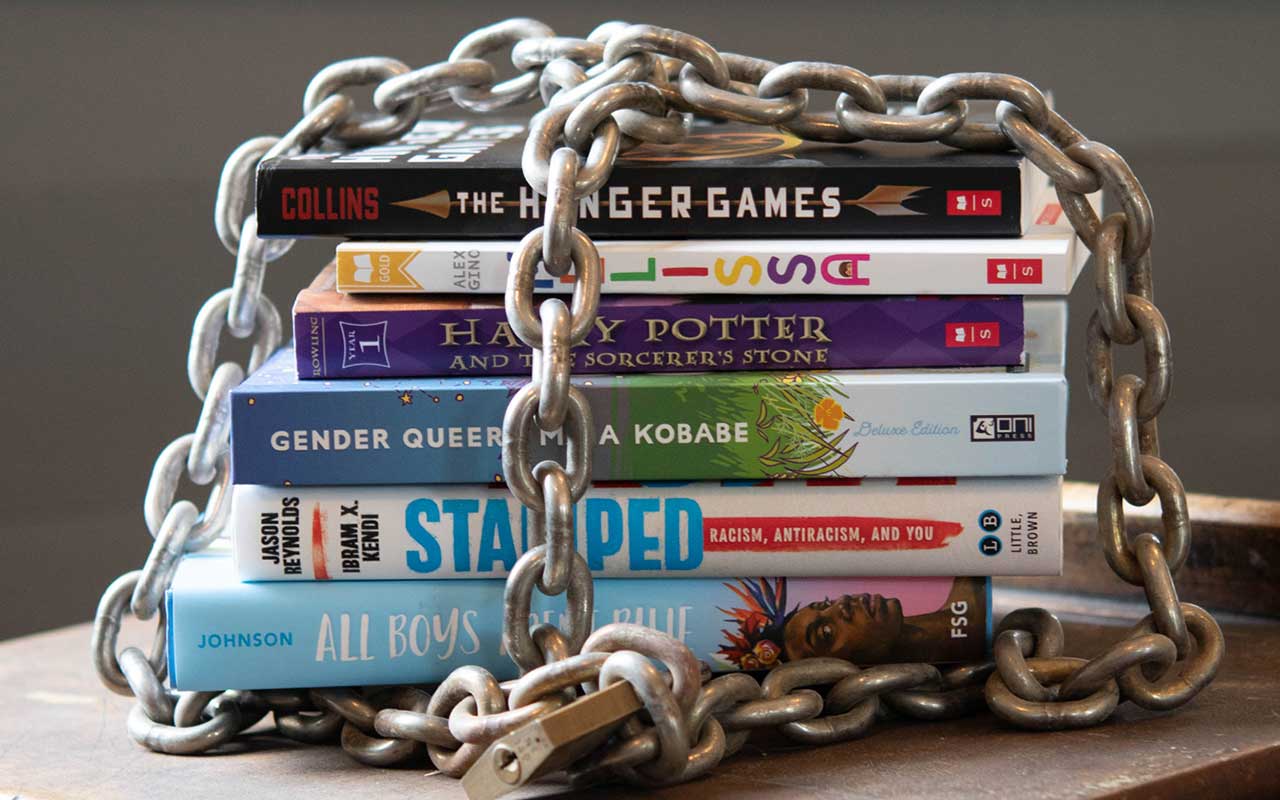