Blissed in the Berkshires 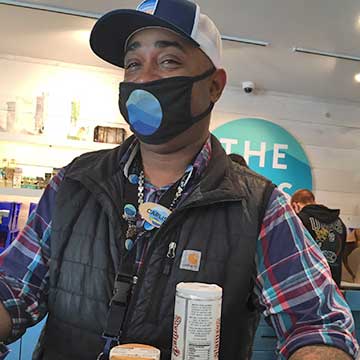 I recently read a book called The New Chardonnay: The Unlikely Story of How Marijuana Went Mainstream, by Heather Cabot. Essentially, the book challenges the conception by people of my age and generation, who may have experimented with marijuana and other drugs in their 20s but have been wine drinkers since “growing up,” that pot is a mind-altering gateway drug whose only long-term effect is, well, dead brain cells. Getting stoned was for drop-outs. It may have been fun, but it was inherently dangerous, which is why it was illegal.

What a different world we live in. In her book, Cabot challenges these long-held beliefs, and by looking at how and why marijuana is going mainstream she suggests that, for wine drinkers like me (and you?), getting together for gummies may be a more satisfying – and even healthy – alternative to our recreational drinking habits.

With legalization well established in Massachusetts, and finally imminent here in New York, I decided to check out the new world of dispensaries and see what the buzz was about. I was goaded to do so by online sites promoting “cannatourism” in the Berkshires, where dispensaries and “budtenders” are presented like craft beverage businesses and the tastings they’re famous for. Imagine a day or a weekend in the Berkshires where, instead of relaxing with a cocktail before or after enjoying a cultural event or the area’s natural beauty, you consume a piece of chocolate or a lozenge or a gummy to take you to that slightly altered state of more focused and full enjoyment. An intriguing prospect!

In my research, I discovered that there are lots of dispensaries to choose from in the Berkshires. In the roughly 25 miles between Sheffield and Pittsfield, there are currently eight well-established locations. I targeted Sheffield and Great Barrington because there were several within just a few miles of each other.

Setting out on a Sunday

I planned my trip for a Sunday. Originally I was going to bring a friend and we were going to explore them like we would if we were on a wine trail, with a safe amount of imbibing included. I imagined bringing along a picnic of non-alcoholic beverages and hearty sandwiches to consume before and after whatever edible we would choose. We’d go to a park, eat and partake, then spend a few hours hiking before heading home.

Thankfully the cannatourism literature is honest about what to expect, noting that the effects of an edible might not even begin to be felt until over an hour after consuming, and that the effects could last several hours. Not wanting to feel compromised in any way to drive home, I decided instead to visit the dispensaries and bring selections back to where my friend and I live so we could enjoy them without needing to get in a car for any part of the rest of the day.

It was a lovely spring morning when I headed to the first dispensary I wanted to visit – The Pass – that conveniently opened at 9am. In fact, like the other dispensaries, The Pass is open seven days a week, with long hours (9am to 8pm every day). I arrived at 9:30, which seemed very early for a Sunday morning, but there were several other cars in the lot. To maintain social distancing inside and out, I had to wait to enter. The very friendly associate at the door thoroughly checked my ID, and asked if I was shopping or picking up an order.

While I waited to shop, I scanned the QR code that brought up the extensive menu of offerings. These were also posted on large screens around the store. I was curious about the others who were there, finding it so hard to shake my judgmental twenty-something self from this experience. I know marijuana has many proven medical benefits, and this dispensary was more like a specialty pharmacy than a head shop. That was reflected in the clientele, some of whom were young, of course, but many of whom were elderly, accompanied by a spouse or a partner or friends.

When it was my turn to order, I was greeted by Carlisle, who was patient and obviously experienced in helping newbies like me. He recommended that I “start low and go slow,” an easy-to-remember mantra around getting started with recreational marijuana products. He advised me to start with ingesting 2 to 5 milligrams of an edible, and that it can take up to two hours to take effect. Along with a line of The Pass-made products, there were treats from some other manufacturers, too. I wanted something that would take effect sooner rather than later, and Carlisle confirmed that the cannabis-infused seltzers from Levia – at 5 mg/20 ounce can – were a good choice. I chose the raspberry lime from among the selection of flavors.

As I was driving the 2.5 miles up Route 7 from The Pass to Rebelle, I passed a sign proclaiming Great Barrington to be the birthplace of W.E.B. Dubois. Dubois is a legend. Among his many noted achievements are first African American to earn a doctorate, and a founder of the NAACP (in 1909). I imagined what he would think of the new landscape in his hometown, which was considered integrated when he was born in 1868. Dubois once said, “The power of the ballot we need in sheer defense, else what shall save us from a second slavery?” Yes, what would he have to say about the state of his state, our country, the world?

With these heady thoughts, I turned into the parking lot of Rebelle. Where The Pass had more of a warehouse feel, Rebelle was reminiscent of a coffee house. In fact, it is an old house, with steps leading up to a wooden deck that wraps partly around the outside, benches and planters waiting to welcome people to sit and relax. Inside, the feel was warm and light. It was airy and open, with sun streaming in from a bank of windows on a far wall. As soon as you enter you are asked for your ID at the counter. Once checked, you are free to explore the space.

I was helped here by Tyler, who was very knowledgeable and enthusiastic.  I felt slightly more informed now, so my questions were more about recommendations. Rebelle has a chocolate bar called Incredibles, with perforated squares of 10 mg each, or a half a square (small triangle) of 5 mg. “My parents love this chocolate bar,” he told me, which brought the message of Cabot’s book home in a big way. This is what it’s about – choosing to chill with a nibble of THC/CBD-infused chocolate at the end of the day rather than a drink. “My mom likes a very small dose,” he said, “half a triangle.” Tyler was making it real for me. I must be his parents’ age. I felt like, hey, if they do it and enjoy it, I probably will, too.

After chatting about choices and options and making my selections, Tyler encouraged me to explore the bud bar, where Rebelle has on display the kinds of flower they sell. The displays are lucite containers with built-in magnifying glasses for close examination of the product, and a panel of air holes so you can shake the pot and sniff it. There are detailed descriptions behind each with the name of the plant, its chemical composition, its tasting notes, and its effects. This reminded me so much of looking at wines. Oddly, it’s a sterile presentation of an organic product with psychoactive effects. Quite a consideration! There is so much to learn, just like with wines.

I thanked Tyler for his patience and personality, and headed a mere mile along Route 7 into downtown Great Barrington, where I had to visit one of the only women-owned dispensaries in Massachusetts, Calyx Berkshire Dispensary. It’s in the heart of downtown, at 307 Main Street, next door to a toy store, and two doors down from a coffee shop. Welcome to the new Main Street USA!

There’s an engaging ID checker at the entrance to Calyx, too. Once cleared, the space, which is described on its business card as “not your typical flower shop” feels funky and feminine. Calyx is in fact the resin-dense female part of the cannabis flower, so it’s a well-chosen name, for sure.

The space is a kind of cavity, with a long bar along one wall and display shelves on the other. The bar has a plexiglass top to showcase the variety of product sold there. Shelves on the opposite wall and some islands in the middle of the room feature artsy and well-heeled accessories including large cloth bags that proclaim, “Buy weed from women.” The colors are warm and earthy.

The associates at Calyx – mostly women – are hip and approachable. The large whiteboard sign behind them was drawn by one of them, Jonah, and when I asked to take a picture of them together in front of it, Stephanie and Hunter made sure to squat so that Jonah’s handiwork was clearly captured.

I was happy to meet the owner, Donna Norman, whose enthusiasm is fully warranted and hard-earned. She recognized the potential for a dispensary downtown after visiting some in Colorado, and she struggled for years to get through the red tape to be certified as a woman-owned cannabis business, finally opening her doors just this year.

When I asked what motivates her around cannabis, she responds without hesitation about how the product can improve people’s lives. She has stories from many people about how even small amounts of marijuana relieve pain, nausea, and even impaired vision. She’s proud of the local influence in her store, and she’s delighted with its reception in the community.

I was so excited with my selections from each of the dispensaries, and couldn’t wait to get home and try one with my friend. It was early afternoon when I got to her place, and we decided we’d split the seltzer while nibbling on some cheese and crackers, then go for a walk. We walked for about an hour and a half, ending up back at her place. We agreed that we felt something, but not much, on the approximately 2.5 milligrams of THC we got through the drink. “Fuzzy” was the word we both chose to describe our mental and physical states after drinking the seltzer. It was nice to be home and have nothing else to do through the evening. I was hungry later! It was explained to me that effects vary greatly depending on the frequency that one uses marijuana and an individual’s body chemistry – just like they do with any “drug,” be it alcohol or an antidepressant or anything.

The adage “start low and go slow” is a good one. Also, set aside the right time and place. Carlisle said, “It’s a recreational product; don’t plan on driving,” and Tyler said, “It’s great for a movie night.”

I couldn’t resist calling this piece Blissed in the Berkshires, because that’s a desired experience from partaking in pot with friends, right? While I felt very happy shopping in the dispensaries imagining how and where and with whom I would indulge in The New Chardonnay, I didn’t want to risk being impaired in any way on the hour-long trip to home base. However, I can imagine planning a weekend with a partner or good friend or even just myself where I didn’t have to be anywhere but in one of the beautiful parks in the Berkshires and then a cozy room to relax. As I would on a wine-tasting weekend. 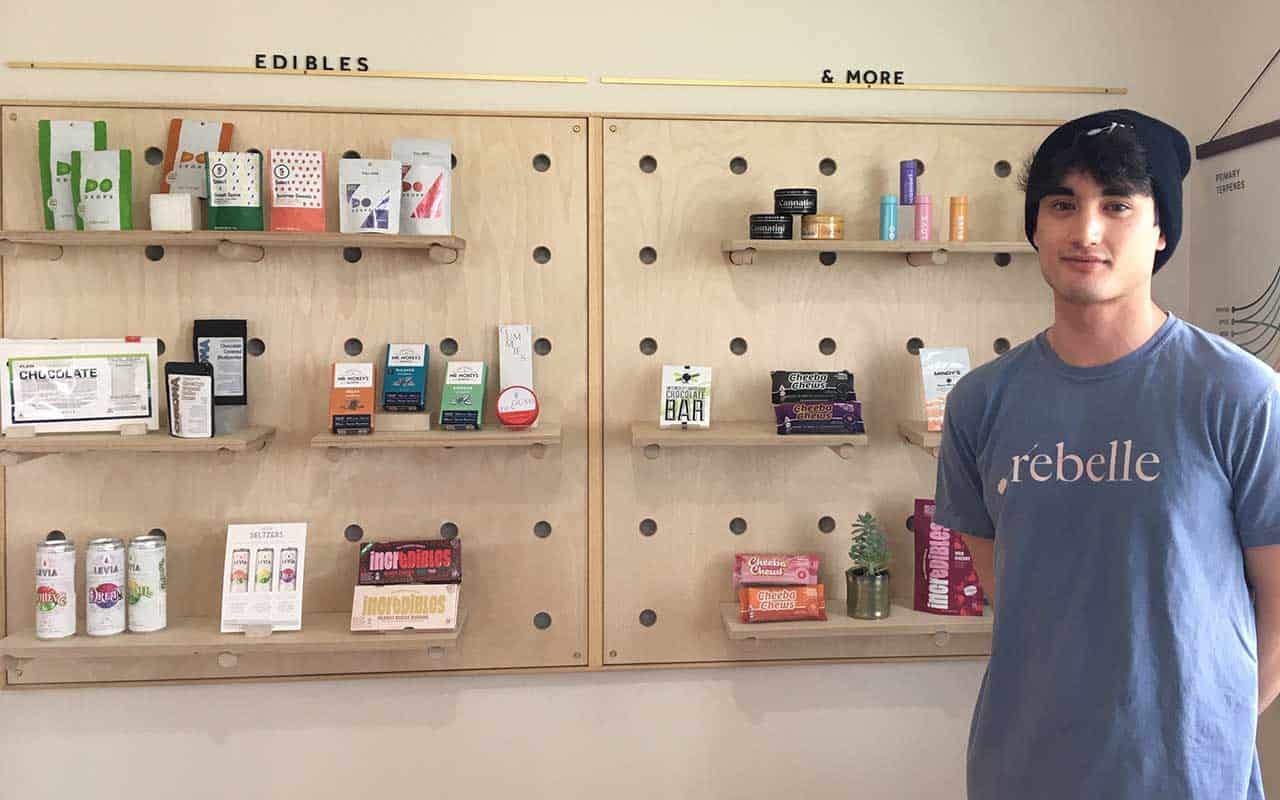