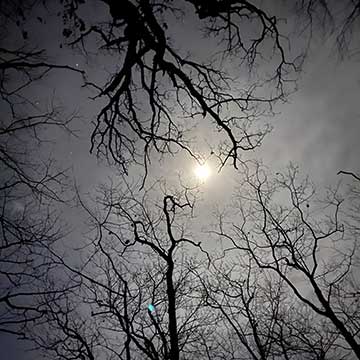 The night required a couple layers of wool but no headlamp. As I stepped down from my truck at the Undermountain Trailhead in Salisbury, CT, a row of pines stood before me like a curtain, awash in moonlight, blue and bare like a Hopper painting, though no work of art that I have seen has captured that otherworldly light. Maybe Coltrane. For a moment, I looked around at the world, transformed, quiet and still.

A couple of times a year, I need to spend a night in the woods. In warmer weather, I can usually convince some friends to go backpacking with me, when schedules are lighter and days are longer. But now, just before the Winter Solstice, I didn’t even bother asking. Too dark, too cold, too busy to bother. Besides, I wasn’t sure I wanted company anyway.

Walking into the woods at night, alone for the first time, is daunting. Not the initial steps, mind you, but miles in, when something unseen darts in the underbrush. A moment earlier, you were lost in thought, one foot in front of the other, and the next you are on alert, scanning the woods for the intruder. With experience, however, one comes to realize that it is almost always a chipmunk, and although I have run into rattlesnakes, bears, bobcats, turkey vultures, and grouse on trails in our area, I learned from each encounter that none of them really are all that interested in humans, and we should all just go about our business.

Staying overnight in the woods is another level of self-reliance, though, and an overnight in the winter is another thing still. For this outing, I packed all of the usual gear, and some in duplicate. In honor of the late Joan Didion, here’s my list of what “To Pack and Wear”:

On this occasion, I left the tent home, as I was planning to stay at the Brassie Brook shelter, which I was reasonably sure would be unoccupied. If not, there was always Riga Shelter, another mile south on the Appalachian Trail. I have operated for awhile now without a tarp, but a March outing in the Catskills last year reminded me how useful and warm they can be even when just strung up to block the wind on the front of a lean-to. It’s on the shopping list, but I will usually throw the bivy sack in my pack, just in case.

A lone Subaru in the trailhead parking lot caused me to think twice about the shelter’s availability, but with temperatures in the upper 30s and a forecast of clear skies for the early part of the night, I left the bivy in the truck and set out in brilliant moonlight with a relatively light pack. The scene was a study in blue, and that particular trail is one of the most heavily-trafficked in the state, so I never feared losing my way. I have hiked it dozens of times, so each bend, each water crossing was familiar to me as an old friend. No need for a headlamp.

But then a newly-fallen oak halfway up the ascent threw off my bearings. Trees are supposed to grow up and out, but a fallen tree resembles a skeletal hand, especially in moonlight. I stepped over the ring finger and under the middle, and paused for a moment to admire the transformation. It was as if I had passed a gate, and the familiar trail assumed a sinister cast.

No matter. It was bright enough to do without it, and in a minute I was looking again at terra cognita in the form of the marker for the Paradise Lane Campsite, posted to the right of the trail. The trail was rocky, but bright and navigable.

About two-thirds of the way up the trail, though, a stand of pines cloaks the path in darkness, and for a few tenths of a mile, I contented myself with bursts of light from my hobbled headlamp, revealing the next five feet in front of me. I inched through the pines, vowing to pick up an emergency headlamp on the next trip to REI.

The astute reader will wonder about the reserve powerbank in my backpack for just such occasions. Yes, I forgot about it, but in my defense, I wasn’t desperate enough to extract it. This is part of the mentality that accompanies backpacking: if I forgot it, I’ll have to make do without it. Over time, it’s an attitude that becomes a trait both on and off the trail. Backpackers are, by definition, planners who prioritize and consider each item on their back, and the veteran becomes a problem solver by experience. Objects such as tarps, ropes, and knives earn their value when they serve as tents, ponchos, windbreaks, clotheslines, and screwdrivers. Still, I learned a lesson this time, and that emergency headlamp is on my shopping list. It would have been worth a few ounces.

The ridgeline of the South Taconic Range features shoulder-high mountain laurel that casts a shadow over the rocky footpath, so it was more fire, flash, out from the intersection of the Undermountain and Appalachian Trails to the Brassie Brook Shelter. Just before the campsite, one last stream crossing solidified my desire for a working headlamp, but I made it across, dry. The convenient picnic table at the site allowed me to unpack under the moonlight, and within five minutes, I had laid out my bedroll.

Winter nights in the woods are long. Even though I had waited for the moon to ascend in the late evening, I was still expecting to spend the better part of nine hours in my sleeping bag. And you notice things. The wind stirring around 2am. Clouds cloaking the moon. Deer tiptoeing through the campsite an hour or two before dawn. Damp, cold feet.

Around 4am, with the prospect of a few more restless hours before sunrise and no headlamp for reading, I decided to burn some cell phone battery on an audiobook version of The Peregrine by J.A. Baker, one of the finest examples of nature writing I have ever read. I’ve become an evangelist for this underread gem, especially in its audiobook format, read by the venerable David Attenborough. In Shakespearian tones, he recounts the balletic flirtation between the narrator and a pair of falcons as it plays out in estuaries to the northeast of London.

An entry from mid-November reads, “All morning, I had the wary, uneasy feeling that comes when a hawk is near. I felt that he was hidden just beyond sight; in time and distance barely outpacing me, always dropping below the horizon as I moved up over the curve of the flat green land.”

As if on cue, behind me and just outside the shelter, I heard stones crunch underfoot of something heavy. I spun around in my sleeping bag and let out an aggressive, “Ho!” to startle whatever was behind the noise, and I immediately saw a headlamp moving left to right across the frame of the lean-to. “Sorry,” trailed behind it as the figure retreated into the woods.

My heart was racing, but it wasn’t until then that I noticed a tent erected fifty yards away at a neighboring site.

Had he been there all night? Why was he walking through my area? The bright orange nylon stood like a recrimination. How could I have been so unobservant? The flat blue hue of the moon had rendered the world in monochrome, a rhapsody in blue, the ridge pole of the tent just another branch in the understory.

That was the extent of my interaction with my neighbor. Under other circumstances, I might have exchanged some pleasantries or even shared a shelter, but I found the intrusion unsettling, inexplicable. I rolled around in my sleeping bag for another hour until the sky, now overcast, illuminated the corners of the lean-to, allowing me to boil water for coffee. I gulped it down with an energy bar and made tracks in order to beat the freezing rain that was forecast for the morning.

To exist we need…

I could have spent the night indoors, secure and warm in my bed, but I chose to sleep outdoors, uncomfortable and vulnerable, because sometimes, like in the middle of a pandemic, it’s worth recalling what we really need to exist: food, shelter, and warmth. Social media spins on, supply chains buckle, but in the forest, there is a world larger than us that does not account for our comfort and ease. It continues to churn on through seasons of cold and heat, growth and decay, and to intentionally place oneself in the midst of that is to remove oneself from the current paradigm and become situated in something timeless and eternal. Maybe that’s not something we will want to do often, but a few times a year, we should all find a way to see the world differently.