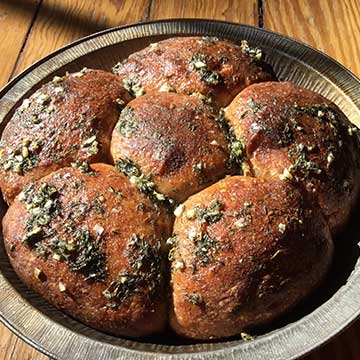 Is there anything more intoxicating than the smell of bread baking in the oven? Is there anything more magical than a first slice from a fresh-baked loaf, warm and welcoming and begging for butter? For anyone who’s experienced the rewards of baking bread, the answers are clear – resounding No’s.

MFK Fisher, one of the most masterful of writers on the glories of food, said, “The smell of good bread baking, like the sound of lightly flowing water, is indescribable in its evocation of innocence and delight.” And the poet Robert Browning declared, “If thou tastest a crust of bread, thou tastest all the stars and all the heavens.”

As I was writing this, there was great news out of France: UNESCO declared the baguette an intangible cultural heritage practice that should be preserved. This gives France the opportunity to apply for funding to keep the baguette in full production, which is importance since it’s estimated that the average French person eats half a baguette every day! Vive la baguette! But I digress (and dream of French baguettes).

If anyone can understand the intoxication of bread and its cultural heritage, it’s Amy Halloran. She’s been elbows deep in baking from the time her mother introduced her to flour as a way to improve at math – scooping it into measuring cups. If she was going to work with this elemental ingredient, she decided, she was going to see what it was capable of. Today, Amy is the author of The New Bread Basket: How the New Crop of Grain Growers, Plant Breeders, Millers, Maltsters, Bakers, Brewer, and Local Food Activists are Redefining Our Daily Loaf. She writes a blog called “Dear Bread.” She is a sought-after guest on WAMC’s “Food Friday” program with Ray Graf. She is a fanatic for flour and everything it is and represents.

“When I started baking,” she says, “oatmeal cookies were my obsession. I made batch after batch, and I started playing around with the ingredients and exploring how others made them.”

That play continued, and she added history into her questions in her 20s. “I found old baking powder pamphlets and books at thrift stores, and ran a farmers’ market, all of which led to wanting to learn more about where our food comes from. How do we get the flour that makes the breads that sustains us?”

Amy grew up in Lansingburgh, just north of Troy, NY, and has lived in Troy most of her adult life. It was with delight that she learned that Freihofer’s Bakery was established in Lansingburgh in 1913 by the brothers of the company’s founder, who started the company in Philadelphia. The importance to the neighborhood and the region was huge and special. Freihofer’s delivered breads and cakes door-to-door from 1913 to the early 1970s. There was even a television show called The Freddie Freihofer Show in the 1950s. Bread is still being made under the Freihofer’s label, which was bought by General Foods in 1987 and is now owned by Bimbo Bakeries USA. Amy loves to think about the Freihofer bakers doing their thing so close to where she calls home.

“If you start exploring,” Amy says, “you find that there are ancestral connections to small bakers in and around any area you live.”

Interestingly, Amy’s mother wasn’t a baker. But she does remember being with her grandmother making pie crust. “I learned that pie crust is like skin,” she says, “it needs patience and planning. Bread is more flexible,” she continues, “and you can play with it in more ways than you think.”

Amy was encouraged and not surprised by the craze for making sourdough bread that happened during COVID lockdown. Baking bread became a way to not only feed family members (and friends and neighbors), but a way to experiment with ingredients we take for granted and to use our hands. Why sourdough in particular? Oddly, there was a yeast shortage during the pandemic, and sourdough starter is just flour and water that naturally ferments. It’s a baking “experiment” that needs attention and upkeep, but on a very simple and ultimately very satisfying level. While you can start a starter at home, Amy suggests getting some from a friend, a bakery, or even in the mail; many baking instructors sell it dried online, for easy sending in the mail.

Back to flour. It’s Amy’s passion because it’s at the heart of what she does, how she does it, and who she shares it with. She describes her “aha” moment with this ingredient in a blog post on Fresh Flour Facts: “I fell in love with this ingredient because I had a cookie whose grains screamed loud and clear – I am oats! I am wheat! Usually, good chocolate shouts, but oatmeal and flour? I was stumped, and set out on a journey to understand why I’d been deprived of such great stuff for decades of obsessive home baking.”

The blog post goes on to outline in detail types of grains that produce flour (they’re all grasses); the parts of a grain; and how flour is made by grinding the seed. “The habit of grinding starches is older than agriculture,” she writes. “Bread began as ground seeds mixed with water to make a pasty gruel. One day, somebody slid a puddle of gruel on a hot stone and voila, there were flatbreads, or maybe flapjacks! Over time, pancakes, hoecakes, griddle breads have remained a staple food for people with minimal resources. Flour plus water equals fuel.”

Just as freshly roasted coffee beans yield more pronounced flavors, freshly ground flour, which will include the bran and germ from the seed, tastes different from flour that’s roller-milled. Roller milling separates the parts of grain kernels and then recombines them to keep them shelf stable for a long time.

Baking with different kinds of flours is part of the fun for Amy. “I’ve been described as ‘gluten-full’ rather than ‘gluten-free,’” she says, “because I love wheat. But there’s also cornmeal, rye, buckwheat, even cricket flour,” she says, “and you can play with these to get out of ‘loaf brain.’” She recently posted about Boston Brown Bread, made with cornmeal and rye and steam-cooked in a tin can – its production “an historical tour of America.”

Ever-present for Amy is the connection, with the ingredients, with the process, with the past – and the future. She muses in her post on Boston Brown Bread, “As I was baking this morning, I thought about how good I feel when I’m handling cornmeal and rye. I love the tastes they make, sweet and earthy. I have celebrated the presence and prevalence of these grains, developing recipes for pancakes, muffins and breads to show that bread is not just wheat and sandwiches, but a staple food that morphs to suit our situations.”

We talk about Amy’s role in her community. “I’m always baking,” she says, “and all the neighbors know it. The kids come over for ‘Amy bread,’” she laughs. “I love holiday baking, and I love baking for people’s birthdays. I want my baked goods to be an expression of my emotions around the people I’m giving them to.”

She’s working on a book that will combine her history with a history of baking in Troy because she’s discovered that a “history of baking can tell one’s story; you learn that the past wrote you.” She’s a self-declared ambassador for the city of Troy, too, and when asked what she loves about it, she reflects, “I have a history here. I can look at the good parts and the bad parts and figure out what it is to be a person now in the context of this place.”

There is so much to learn from and about Amy. She’s a sourdough starter herself, evolving into something rich and sustaining from just a few ingredients of imagination and wonder and attention. One thing leads to another. I couldn’t come away from my time with her without a few favorite recipes, and she generously shared the one for pampushky – Ukranian Garlic Buns (winner of Best Bread at the 2022 Schaghticoke Fair!) and a link to a recipe and full instructions for making sourdough English Muffins: www.thekitchn.com/recipe-sourdough-english-muffins-236494.

Her favorite cookie is still oatmeal. Go to https://amyhalloran.net to learn more about Amy, to subscribe to her blog, Dear Bread; to access sources of fresh flour; to find out how to get her book; and to connect with why food is the most intimate of things we share together.

Make a levain (leavening agent) 1-2 days before you want to make the buns. Mix the combo you’d like in a quart jar.

Let this set in the refrigerator until ready to use. The yeast mixture will double.

When ready to make the buns, in a large bowl mix together the levain and the following ingredients:

Combine just until blended and let set for 20 to 60 minutes. This allows the dough to get started without the presence of salt, and is called an autolyse.

Add to the dough

Thoroughly blend everything together. If using a stand mixer, mix on medium for 5-7 minutes, or until the dough is pretty stretchy. If the dough is very stiff, add up to another 60 grams of liquid. Using whole grain flours means you’ll have to adjust the liquids, as the bran is pretty thirsty.

Let rise for 2-4 hours, stretching and folding at half hour intervals if you remember. You can also let the dough rest in the refrigerator overnight, right after mixing.

Divide dough into 12 to 14 pieces and roll under your palm on a floured board. Place in a well buttered pan. I like to make two 8 inch pie pans, which gives about 6 rolls each. You might have a couple of strays to tuck into a tiny pan. Let the shaped rolls rest overnight in the fridge; alternately, let rise at room temp for 1-2 hours, when they seem to have filled the pan. I like to use a second pie pan as a hat to cover the rolls while rising.

Bake in a preheated 425 Fahrenheit oven for 45-50 minutes. I leave the pie pan hat on my buns for the first half hour of baking. Rolls are done when dark on the surface and the internal temp is at least 205 Fahrenheit.

When you take them from the oven, spread with:

4 tbsp butter or sunflower oil, or a blend of the two
2 tbsp dried dill or 3 tbsp fresh parsley or dill
1 tsp salt and 1 -2 cloves garlic, minced 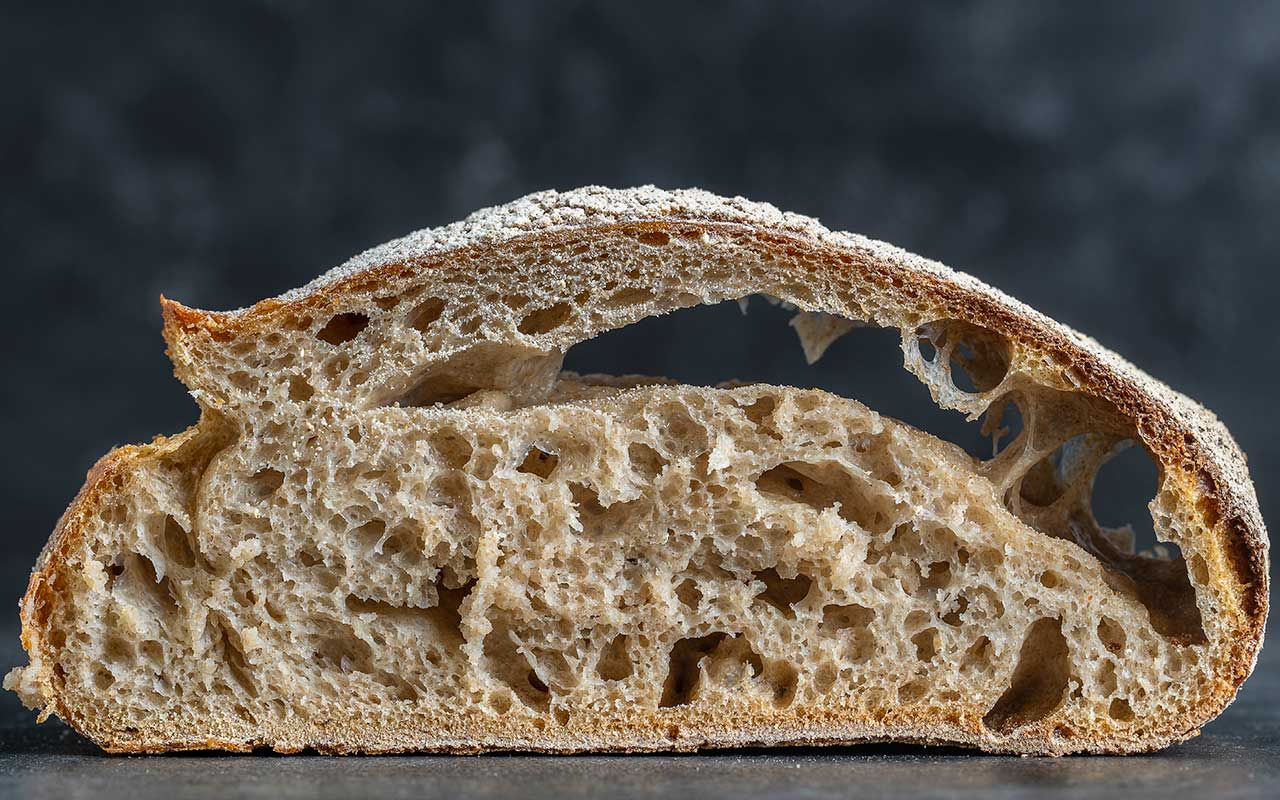