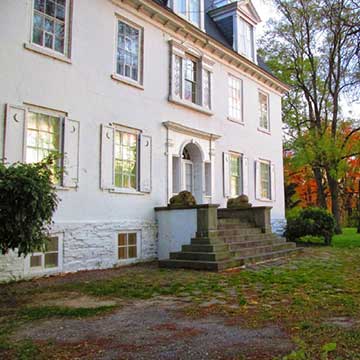 Clermont State Historic Site, located in Germantown, NY, has belonged to the State of New York since 1962. We spoke with Susan Boudreau, historic site manager, and Jennifer Hemmerlein, executive director of Friends of Clermont, to learn about this historic location and how it has changed over time. In our interview, the two described the site’s origins and current programs, while emphasizing plans for the site that will, as Susan puts it, “create longstanding change to the way Clermont interprets its story by broadening the narrative to reflect a richer history of Clermont.”

In our communication, Susan recounted the story of the site, detailing key information about Clermont’s past. She explains, “The Livingston family has been a New York institution since the Lord of Livingston Manor immigrated here from Scotland in 1675. Robert Livingston, the eighth son of a minister with no inheritance to his name, charmed his way through colonial Albany’s social ranks, eventually marrying into the prestigious Schuyler family. The young couple went on to acquire a few hundred acres of land in the Hudson Valley to create their own homestead, eventually ending up with 169,000 acres in what is now Columbia County.”

Susan continues, “Clermont, the mansion at the center of it all, was built in the late 1730s by their son Robert ‘The Builder’ Livingston. He would purchase half a million acres of land directly across the Hudson River in the Catskills and his daughter-in-law, Margaret Beekman, would bring northern Dutchess County to the family’s holdings. Margaret was the widowed Lady of the House when the British burned the mansion to the ground in October 1777 and oversaw its rebuilding the following year. Her eldest son, Robert ‘the Chancellor’ Livingston, would go on to make his mark on New York, not with land, but with politics and science. He was one of the five drafters of the Declaration of Independence, the high judge of New York, the Minister to France, the co-creator of the first practical steamboat, and the first gentleman farmer to bring merino sheep to America. By the start of the 19th century, the Livingston family had control over most of the land in the mid-Hudson Valley and many of its towns like Livingston, Clermont, Ancram, and Germantown, which still bear their names. Even as children took their land inheritances and property was sold, the Livingston family persisted at the mansion until the mid-20th century.”

From then to now

Today, Clermont State Historic Site covers over 500 acres. The mansion that still exists today underwent various renovations under Livingston ownership, including an altered roofline, a third floor, and other additions. Currently, the site is undergoing a restoration to the mansion’s exterior to preserve the building’s features and restore other outdoor areas like the historic patio and playhouse. Over time, while buildings on the grounds have been altered or destroyed, the landscape has mostly stayed the same. While the property was in flux, in a sense, for generations, much of the surrounding environment remained. There has been erosion, though historic trees, trails, and roads can still be found today.

Susan notes that “Clermont State Historic Site is much more than the history of the Livingston family, buildings, and landscape, of course.” Today, the State and Friends of Clermont are committed to broadening the narrative of the site’s story to ensure that a more complete and accurate lens of the site’s history is reflected in their tours, programs, and changes to the site by focusing on the stories of the enslaved people, freed black people, Native American communities like the Stockbridge-Munsee community, descendants of the Palatines from Germantown, NY, and tenant farmers, all of whom played integral roles in creating the Clermont State Historic Site we know today. According to Susan, “A mansion tour and a new visitor center exhibit will highlight these stories in new and innovative ways.”

This idea ties back to the overarching mission that Clermont seeks to fulfill going forward: creating an inclusive, engaging site both through the programs offered and the scope of the history shared with visitors. By fostering a space that is accessible to all people, and in doing so, sharing the stories of those at Clermont who have been historically overlooked, the site can move towards a positive shift in museum culture that is no longer elitist and lacking in diversity. Susan underscores, “These are stories that people want to learn about. In the past, there were children and adults who came here and did not see themselves in the stories we told. As we share a richer interpretation of the history of Clermont, we hope visitors will relate to all aspects of Clermont’s history.”

Clermont’s landscape has drawn great numbers to the site, people who have found peace and relaxation on the grounds in the face of the pandemic, while also inspiring many of the changes made to keep people safe. “We were already in the process, before the pandemic, of starting to re-envision our interpretation of the site reflecting all of the voices of Clermont. The events of the last eighteen months only highlighted the importance of widening our lens,” Susan emphasizes.

In our discussion, Jennifer described Clermont’s Teaching Garden, which is “a focal point of both the landscape and the site’s efforts to create an engaging site for people from all walks of life.” Informed by the weather and gardening journals left behind by Clermont Livingston, Chancellor Livingston’s grandson and a gentleman farmer, the teaching garden was created eight years ago, and the innovative program Harvesting History was born.

Harvesting History aims to teach people of all ages and backgrounds about not only history, but food, science, nature, art, and more. A major basis for the program is giving everyone the opportunity to learn about where food comes from and how to produce it through hands-on activities, all in an accessible way that actively seeks to combat food insecurity in the surrounding counties. This particular endeavor is directly linked to the agricultural history of the site, as Jennifer states: “The fact that Clermont Livingston left us all of his journals has been very valuable. One thing that we always do in the garden is plant heirloom varieties – things you really wouldn’t see in a grocery store, such as citron melons. So, we’re not only reviving that agricultural history but we’re sharing it with kids and adults. Right now, Harvesting History serves everybody from toddler age to senior citizens, in one way or another.”

Because of the pandemic and the inability to bring children to the garden, Clermont has launched multiple initiatives, one of which includes food donations. While all possible programs that could be held in a pandemic-safe way continued, they decided to use the teaching garden for food production, with plantings intended for produce that could be replanted. All the produce harvested has been donated to local food pantries, like the Germantown Community Cupboard, Community Action of Greene County, and the Hudson City Department of Youth.

Working with the latter inspired another important endeavor during the pandemic, which are Harvesting History lesson kits to give children access to these enriching and educational activities at home or school. About 300 of these kits were distributed in Hudson last summer, and 120-130 were distributed monthly during the school year in partnership with the Cornell Cooperative Extension, eventually totaling over 900 kits by the initiative’s end. Jennifer describes, “So for example, we have a whole lesson around germinating seeds, and so we made a kit called ‘Germination Station,’ and the notion with the kit was that every child, no matter what their internet access was, or their access to school supplies, could do the activity.”

Other examples of kits included bird seed ornament making, paper marbling, growing microgreens, and turnip carving. Even in the midst of the pandemic, these kits encouraged engagement, and the program saw immense growth. Jennifer shares, “In 2016, the program served 300 children. Last year we served 1,250 children, and this year we have already served nearly 1,100 children.”

A key part of the Harvesting History programs, whether they are in-person or in the form of a portable kit, is the lasting impact this exposure to interdisciplinary learning has on children and their families. Parents and kids alike can get involved with workshops tailored for the whole family. Jam-making, candle-making, and creating hypertufa planters have been among the many workshops offered, and since the pandemic these opportunities have been free of charge. When they do cost anything, admission for children is always free and for adults normally $10. “We try to be very eclectic in what we offer. Some are more food-oriented, some are more gardening-oriented,” Jennifer explains. “I think that we are very fortunate to have a very beautiful landscape here, and I feel like we really try to create programs in a way that utilizes that landscape.”

This fall, programs at Clermont will include Harvesting History family workshops, like pumpkin and turnip carving, candle-making, and holiday centerpiece creating, as well as Legends by Candlelight, which will be held on four evenings, October 22, 23, 29, and 30. This outdoor, spooky event shares history-based ghost stories about Clermont.

Please check out www.friendsofclermont.org or www.nysparks.com to learn more and to find a calendar of upcoming events at Clermont State Historic Site. 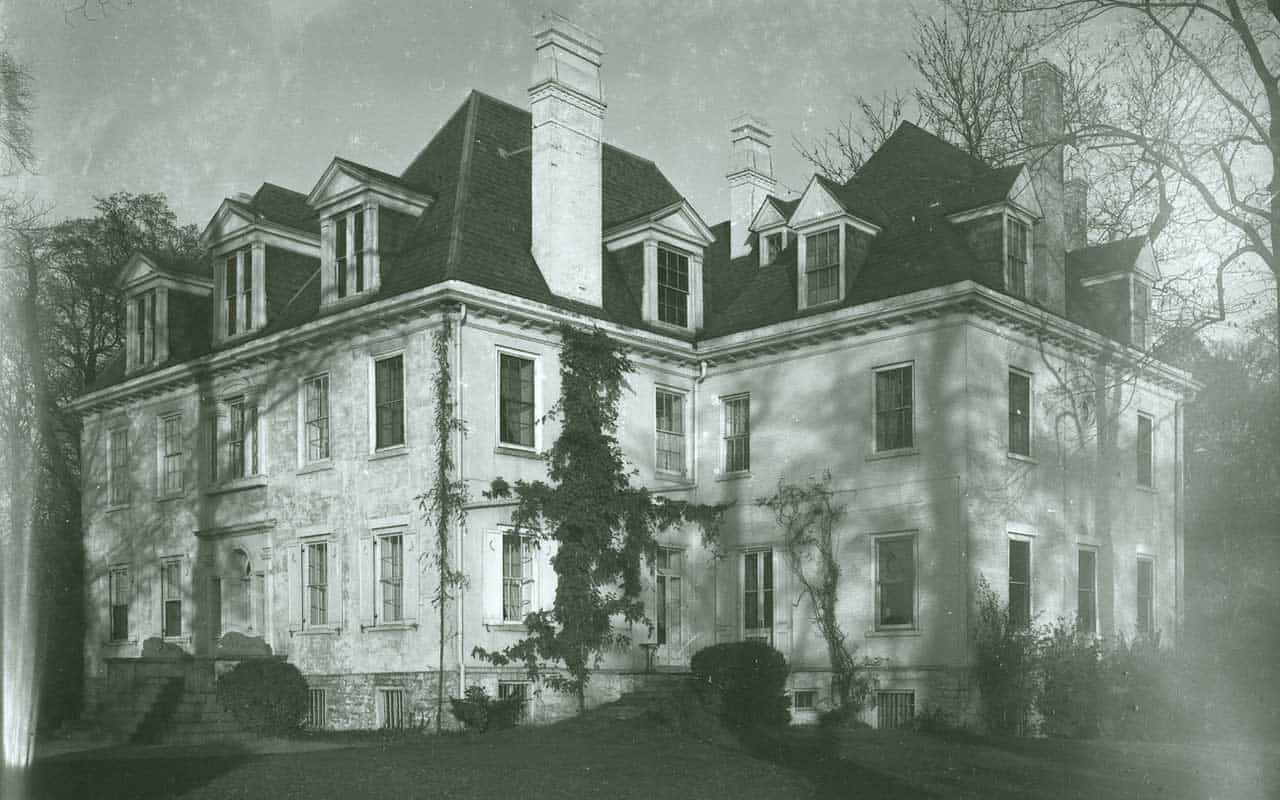