Local ambulance services have been integral to healthy, happy, and safe towns. The volunteers that make up the Salisbury Volunteer Ambulance Service (SVAS) greatly contribute to this effort, and with the struggles of the pandemic, it is doubly important to recognize just how much they serve the community and help those in need. We spoke with Jacquie Rice, who has served on the SVAS on and off for over 40 years. Jacquie is also a math teacher at Housatonic Valley Regional High School, while coaching the Housatonic swim team and working for the town of Salisbury, CT, in multiple capacities, which include her position as Emergency Management Director. Now the Chief of Service for the SVAS, Jacquie is a dedicated member of the community who has been committed to helping others and keeping people safe for decades. 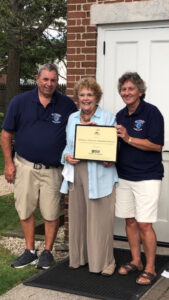 Growing up with parents that were volunteers and heavily involved in the community, Jacquie recognized the significance of this type of work at a young age. “They basically instilled in me community involvement and stressed the importance of giving back to the town,” she explains. “I had a couple neighbors that were a little bit older than me, some good friends, and they were involved in the ambulance squad. They were young members of the ambulance squad, and it’s always been volunteer. And they said, ‘Why don’t you come be a member of the ambulance squad?’”

From there, at the age of 18, Jacquie became an EMT, and then a member of the SVAS. Initially, she served as First Aid Chief, and she now has been Chief of Service intermittently for many years, including currently. She also volunteers for the Lakeville Hose Company. Having grown up in Salisbury, Jacquie has been fulfilled by the idea of giving back to the very people that helped to raise her. There is a real sense of community that comes with the responsibility: “Giving back to the community this way is like me helping my neighbor.”

This idea is especially important, Jacquie feels, when responding to the older populations in the Northwest Corner that call for help more often. Though from her experience, it is clear that anyone appreciates a sense of recognition when they need to call for help. Having to contact an ambulance can be an incredibly stressful situation, and Jacquie sees that it can be beneficial for someone to recognize who arrives to help: “These are all my friends’ parents, and grandparents. So, when you get there, it gives a sense of, for the people, it puts them at ease because they know the people who are coming to help them. We have landscapers, and bankers, and lawyers, and people who work for the state, and teachers, and social workers, and town employees. Everybody knows everybody.” The SVAS truly is all about their motto: “Neighbor Helping Neighbor!”