There is something poetic, almost lyrical about compost, I’ve decided. True, most of the compost-conscious world focuses on prosaic matters like the ratio of nitrogen to carbon, feedstocks, and NYS DEC 360 permits. It elevates creatures that I’m guessing are voracious, called detritivores, and their taste for rotting food to levels that imply they are essential. And it gets worse. Many budding earth scientists spend entire internships studying the composting capabilities of blue soldier flies, next to which the red wiggler worms enlisted for one style of tried-and-true composting seem almost cuddly. I still carry the scars from a Cary Institute program on worms that featured a full-color high-resolution photo of an 8”-long banded nightcrawler. (No wonder scientists take refuge in Latin nomenclature). When, only days later, I nearly stumbled over one on a gravel path, I fled, shrieking, as if being chased by the creature from the lagoon.

Sane people, however, consider composting the logical, proven way to repair soil and simultaneously tackle waste management. What too much tillage, which destroys the habitat of micro-organisms and increases the risk of erosion, and reliance on synthetic fertilizers, pesticides, and herbicides have removed from soil, compost replenishes. It improves soil’s structure, which in turn improves its growing capacity and health, and thus the quality of our food.

Composting in various forms has existed as an amendment for soil for millennia, and yet it remains, for many of us, a mysterious process, and maintaining a compost pile at home can seem like one task too many. But that has been changing. Think of it this way: Composting is organic waste matter’s avenue of escape from the degradation of entombed landfills. It snatches what will become life from the bottom of the dumpster. Looking at a perfectly reborn pile of rich, odorless, aerated 30 : 1 pH-balanced compost is, for a soil ecologist or gardener or farmer, something akin to contemplating Keats’s Grecian urn. The shorthand farmers often use for compost is “black gold.”

Becoming familiar with what Emily Rueb’s 2017 article on composting in the New York Times called “the primal chemistry of decay” is the first hurdle for many of us. What nature’s process of decay makes is called humus; the heart and soul of soil, humus crumbles softly in our hands. Compost is nothing more than humus that has been created, painstakingly, by our imitation of that natural process, for which ingredient #1 is decomposable organic matter, or feedstock. Among the article’s revelations was Rueb’s singling out of McEnroe Organic Farm, just south of Millerton on Route 22, as “the largest recipient of New York City’s feedstock.” Meaning that massive quantities of organic refuse were being shipped to McEnroe’s for conversion into top-notch compost. Mayors Bloomberg and De Blasio championed the composting cause – as early (or late?) as 2013 countertop buckets and rolling bins were being handed out to residents of Staten Island – but Covid interrupted these initiatives. And now Mayor Adams’s 3% budgetary cuts are set to end such efforts altogether, including a burgeoning curbside pick-up program.

While America’s largest city has hit a serious snag, McEnroe’s, which began implementing its transition to organic practices in 1987, continues undeterred. It is one of numerous farm operations that offer a drop-off service for household scraps that will be added to the farm’s own mixture of food scraps, leaves, and manures and plowed back into its own fields. What’s left is sold back to consumers. For anyone eager to give composting a chance but not quite ready to plunge into the creative-practice part, McEnroe’s details what is and is not acceptable as drop-off material at www.mcenroeorganicfarm.com/programs/compost-drop-off.

But what about those of us who are curious about the process; unfazed by existential questions of life, death, and billions of invisible microbes; and lean toward hands-on rescue of our patch of present-day paradise? Not every community is fortunate enough to have an ecosystems research center, but ours is, and Millbrook’s Cary Institute recently produced a virtual “how-to” for composting that dispensed the relevant science in the helpful context of an indispensable demo.

Dr. Jane Lucas, a microbial ecologist with expertise in global-change ecology and plant-insect-microbe interactions, specifically how antibiotics fed to livestock affect soil’s storage of carbon, drove the presentation alongside Lori Quillen, Cary’s director of communications. “Composting,” Dr. Lucas began, “is the accelerated decomposition of organic matter. Pure and simple. It can be seen as each individual’s way of mitigating our human impact on the environment.”

In fact, she drilled down, residential households are the biggest part of the [wasteful] problem. The National Resources and Defense Fund’s pie chart does not lie. We in our houses and apartments waste more food than grocery chains, restaurants, factories, and such institutions as schools and hospitals. If you are looking in the mirror, you are looking at a prime suspect. And while we are at it, consider the increasingly compromised resource of water: 250 cubic kilograms of water, the equivalent of all the water contained in 100 million Olympic-size pools, are wasted producing just the food that we waste.

What goes into a compost bin – the most common stylistic approach to composting – is a mixture of “greens” and “browns,” or nitrogen-heavy and carbon-heavy items respectively. Greens can be green leaves, grass clippings, shrub prunings; cooked or uncooked fruits (avoid citrus) and vegetables; and non-color-conforming coffee grounds, tea bags (plus the tags), and the manure of herbivores (for small households, that would be chickens and goats). Browns can be untreated wood shavings, crushed egg and nut shells, shredded paper and cardboard, lint from your dryer or vacuum cleaner, hay or straw, and other desiccated (or nearly) bits and pieces. The bits and pieces are a clue; microbes have a harder time dismantling cardboard than they do tomatoes, so the smaller the browns’ dimensions, the faster the entire process. NB: meat, oils, and dairy products do not belong in household compost.

What is the most common mistake in making compost that aspires to the lyrical? Overdoing the greens. We all have a mental picture of fruit peels and bread crusts slipped virtuously into our dedicated jar or bin, but that can be misleading. What you need is, ideally, 30 parts brown to 1 part green. If you err on the side of the greens, you will be looking dispiritedly at wet, slimy, smelly … stuff. And you will give up, or at best talk yourself out of giving up. Yes, there has to be air, and temperature counts too, but if the basics are too heavy on the more exotic greens (nitrogen) your compost will be a mess.

So how much is too much or too little? What does an acceptable balance look like? Dr. Lucas began by lining her container – a glass aquarium for the sake of demonstration – with twigs and bark. In reality, a dark, heavy plastic 55-gallon-or-so container with a tight-fitting lid is recommended. (Plastics pollution will be discussed another day). To ensure air flow, holes are made in the bottom and around the upper edge of the top. Do not make holes in the lid, which will only hasten the descent to a wet mess when it rains. Propping bins up on bricks or concrete blocks also promotes aeration.

Some bins are equipped with turners for tossing the contents, or “fluffing” them with air, which leavens with oxygen the activity of the microbes. As the microbial life becomes excited with purpose, the heat increases, ideally up to abut 150° F., which also kills any upstart seeds from sprouting; when it’s exhausted, the heat decreases. What follows is a period of maturation, after which you have your long-awaited (six to nine months) compost, what impacted or impoverished soil needs most.

It’s all about balance

But back to the bin, which we last saw lined with 1-2” of twigs. Next comes 5-6” of more browns. Curiously, newspapers were not always allowed among the browns. They were excluded because the ink was petroleum-based, and thus toxic, but now newspaper ink is soy-based. Also, be sure your browns do not include parts of diseased plants, for obvious reasons. And, in case you are tempted to divert all your fallen autumn leaves from municipal pick-up to your own compost pile, reconsider; before they fell, leaves had most of their nutrients removed as trees sucked back their stored energy in preparation for winter – so they have fewer micro-organisms and, again, could slow down the composting process. Unless, say, you throw in a handful of chopped broccoli. It’s all about balance.

Next comes, at long last, the greens layer, which should begin, illogically, with egg shells, for their calcium; cut-up banana peels for their potassium; and on down the list. Pet hair and fur are okay; their feces are not. Garlic is a touted anti-microbial, so its addition would work against everything we are trying to encourage. And, if you are tempted, do not try drying your damp greens to make them acceptable in a mix that is already trending toward wet. Drying them will make them brown, sure enough, but also destroy the organic matter that made them valuable in the first place.

Finally, consider adding, to be safe, just a little water. I know, I know. But even compost is enhanced by a judicious helping of inconsistency. As Dr. Lucas says, “Compost should feel like a wrung-out sponge.” 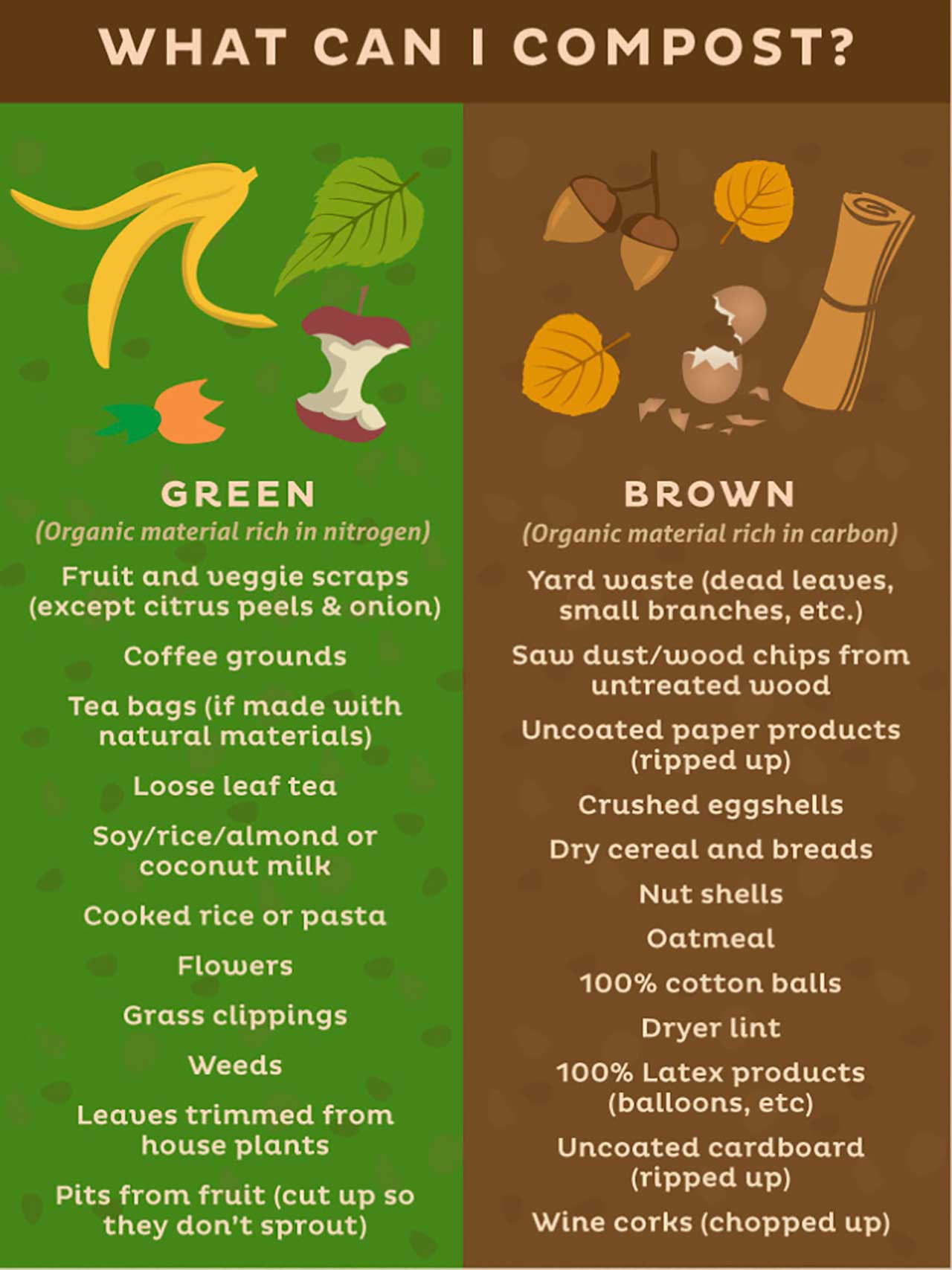