Reading Frances Palmer’s brilliant Life in the Studio, published in 2020, was for me three parts exhilaration, one part exhaustion. The good kind. It may look like a modestly sized, more-of-same coffee table book, but it emphatically is not. It is a treatise creativity and inspiration as the subtitle announces, a manual on technique, a workplace journal, a studiously considered collection of still-life color photography, and a comprehensive narrative about throwing, glazing, arranging, documenting, parenting, cooking, and laughing. Here you will discover the eager Barnard student gaining early access to Columbia’s art history courses by operating the library’s slide projector, the knitwear entrepreneur, the artist coping with twin adjustments to country and family life as she studied and read. Her essays map her experiences of art, gardening, and business, with insightful forays into friendship, food, loss, stamina, and, not least, the task of assembling a two-storey beamed studio overlooking her garden laboratory partially installed on a dilapidated 1930s tennis court.

If you think that making pottery (which covers porcelain, earthenware, stoneware, terra-cotta … determined in part by their firing temperatures) doesn’t run the gamut from ancient history to visceral emotion, you haven’t yet encountered Frances Palmer’s “functional art,” her modest term for an ever-evolving body of classic and whimsical work. Her clarity about the way she allocates her time is a model of creative purpose. 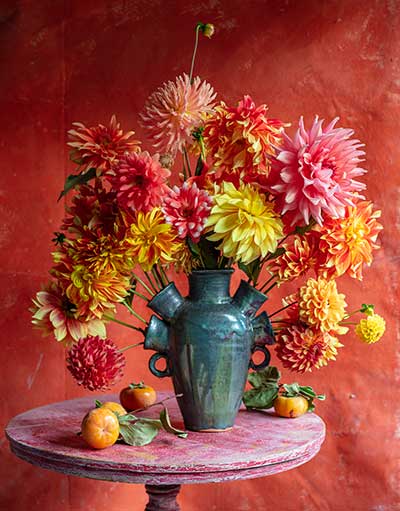 When we first spoke, an hour after I’d written her – don’t put off what you can do immediately – I was stumbling through questions about inspiration and process. Mercifully we agreed to reconvene. She had a beekeeper to visit, and I had some reading to do. I located a library copy of her book and spent the next few days trying to contain myself, sitting on my hands except to turn pages.

The photography – of potter’s tools, a Tarte Tatin, pots overlayed with pressed-flower shapes – floats in abundant text that is never tedious. It brims, in fact, with truths that could fill an almanac not unlike Mr. Franklin’s:

Palmer’s book captures life lessons amid the drama of everyday practical living. There’s no such thing as an authentic idea that isn’t worth one’s attention.

Dahlias are frequently under-valued, due to, it seems fair to say, their brazenly gaudy colorations, are also (another black mark) devoid of scent. Worse, they eliminate themselves from early inclusion in arrangements by insisting that they be left alone to mature. If you cut them down in their youth with a heedless snip, you have ended their residual growth; there is no such thing as a budding dahlia becoming its fully realized self in a vase.

Palmer’s favorite flower is of course the magnificent, long-blooming, complex and generous dahlia.

Clay, too, has a strong sense of self that a sensitive potter respects. Once committed to the potter’s wheel, clay will resist, Frances revealed to to me, any last-minute design changes, returning to the original despite urgings to alter course.

Making a pot involves “a larger contemplation.” The potter herself calls on discipline to find balance and calm before handling the clay. “If I feel tired or upset while at the wheel, I stop until I can pull myself together.”

Which often means going into her kitchen to bake; seldom has elemental frustration yielded such an excellent short list of recipes. This intimate rapport with the primary substance of her art reminds me of a chair-maker I met in Italy. His planks of domestic walnut littered a courtyard exposed to pouring rain and searing heat. Seeing my confusion, he said, “Oh, don’t worry. That wood will age here for a decade. I can hear it singing, keeping me company.”

The initiating movement is critical

Positioning a lump of clay on the wheel is not done casually. Like a pianist’s opening chord or a sprinter’s burst off the block, the initiating movement is critical. If a lump of clay does not center properly, “you might as well pull it off the wheel and start over.”

Once centered, the clay is not only so-called putty in the potter’s hands; it participates. The finished shape, the result of every dip and turn, pull and push, only becomes itself when released by the clay. Many of her pots (generic here for all things thrown by a potter) are white, but often they are coated in lavish oxblood, delicate celadon, or subdued ash glazes or painted in streaks of cobalt verging on indigo. As one would expect, the assumed symmetrical requirements of tableware, from cake plates to platters, merrily give way to lopsided, ruffled, fluted, gouged, and melting shapes.

Just as the gardens’ flowers are chosen to complement and lend perspective to her pots, photography entered the repertoire naturally as the best way to create an archive of both. But these careful records quickly became much more, studies in warm and cool, direct and diffused light, and occasional homages to such eminent potters as Louise Rie and Giorgio Morandi.

When I looked up another avowed influence, George Ohr, aka the Mad Potter of Biloxi, his tortured designs underscored the emotion that ideally begins with the practiced touch of a potter’s moist hands, passes through a bisque phase, and is finally fired into something solid, however fragile. In one of her many, stunning still-life photographs, a swathe of pale gold fabric hangs behind a small vase of wild roses set on a dropleaf table, the arrangement lit from one side through a large-paned window. It made me remember the light Vermeer was always lying in wait to capture. That may seem a grandiose comparison, but I’m not sure that the light itself makes any distinction between ermine and pearl earrings and the tender curve of a porcelain pot. •

For more on Frances Palmer, go to francespalmerpottery.com or visit her Instagram @francespalmer. 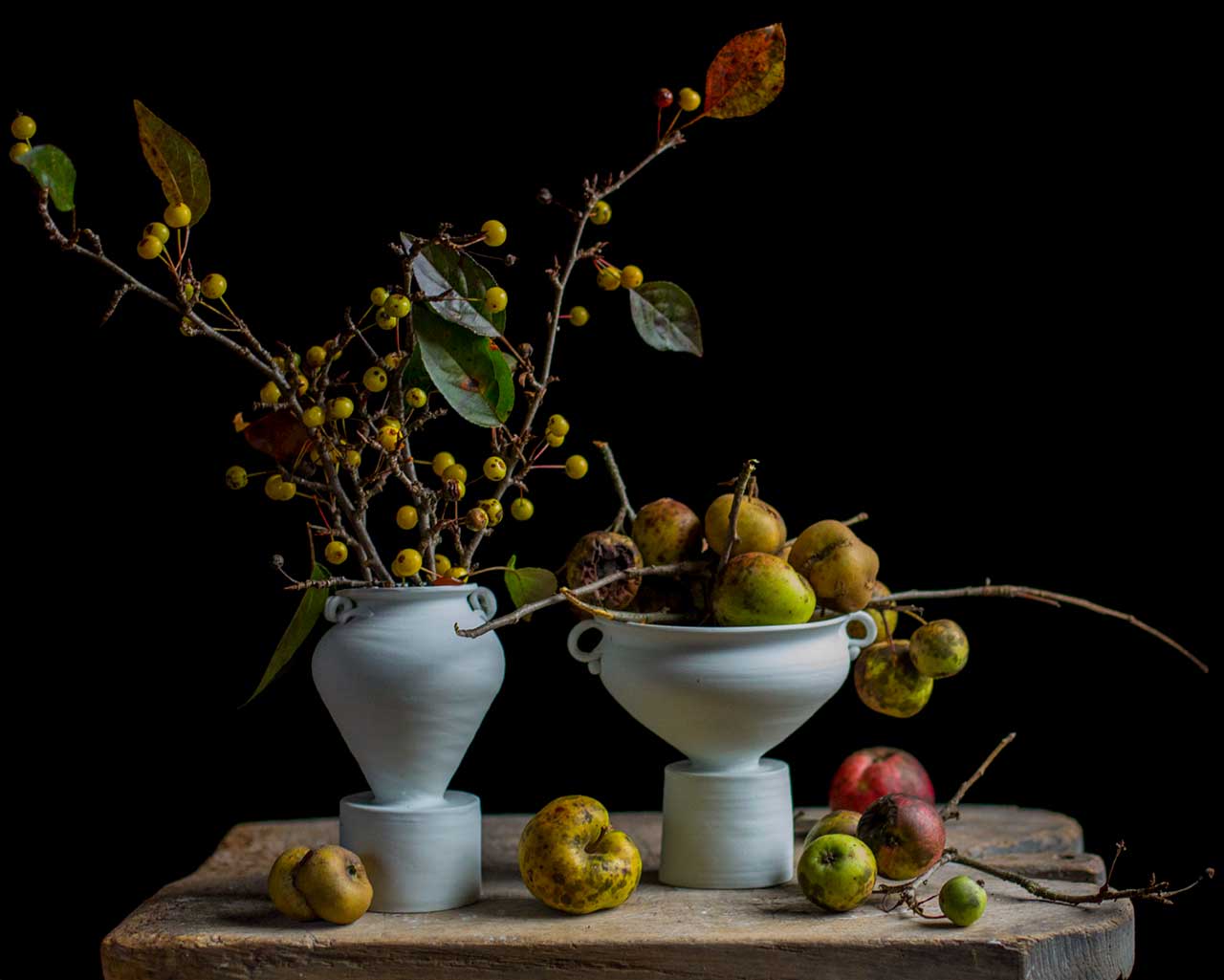