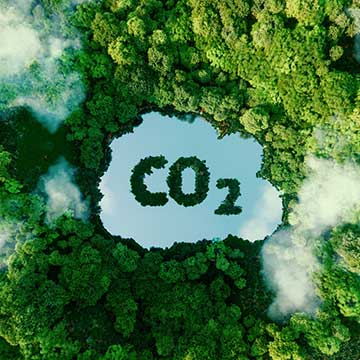 Carbon neutrality sounds like an impossible goal, doesn’t it? The answer turns out to depend a great deal on where you live. It isn’t that hard if you happen to live in upstate New York. That’s because one of upstate New York’s best kept secrets is that it has the cleanest electrical grid in the nation, i.e., it emits the least carbon per kWh – about a quarter of the national average. It’s hugely cleaner than New York City’s grid, and even cleaner than California’s, that smug beacon of environmental progressiveness. And it’s getting even cleaner because New York State recently mandated an entirely carbon neutral grid statewide by 2040 – the most ambitious clean power plan in the nation.

Why is upstate New York’s grid so clean? Remember that photograph of your grandparents’ honeymoon at Niagara Falls? Hold that thought. We’ll return to it after you master the basics of becoming carbon neutral.

How can this clean grid help you approach carbon neutrality?

Let’s start with where your personal emissions come from. Excluding work-related emissions, ballpark, about 40% comes from your home, another 40% from your car, and the remaining 20% from your stuff: the food you eat, the things you buy, and the waste you throw away. Let’s focus on the two largest pieces that comprise about 80% of your emissions:  your car and your home.

We’ve all read about electric vehicles and how they will help us achieve carbon neutrality. But how does that work? If you have a car that gets 25 miles to the gallon, it will emit about 80 pounds of CO2 for every 100 miles you drive. In contrast, an average electric vehicle in upstate New York doing the same trip will be responsible for just eight pounds of CO2. And when New York State’s grid achieves carbon neutrality – Poof! – that number will go to zero. So if you purchase an electric vehicle, you’ve removed most of the 40% of your emissions that came from your car.

PS: Driving an electric vehicle will also cut your fuel costs in half. The four gallons you’d need to take you 100 miles would cost you $14 if gas were $3.50 per gallon – and more now that gas prices are high. In contrast, an average electric vehicle would cost just $7 to make the same trip. Electric vehicles aren’t cheap, but the federal tax credits of up to $7,500 could help fund the difference.

If you’re like me, you might worry about getting an electric vehicle. What if you took a long trip and couldn’t find a charging station? A plug-in hybrid vehicle – a car that can do short local trips on electricity but can run on gas for longer trips – might be the right solution for you. If most of your trips are local, such a vehicle could achieve most of the cost and carbon reductions of a fully electric vehicle.

OK – you’ve zeroed out the 40% from your car, but what about the 40% from your house? Most houses have two sources of energy – fuel and electricity. Fuel is typically used for heating, hot water, cooking, and maybe clothes drying; the electricity is used to power everything else – your lights, appliances, air conditioning, computers. Because our upstate grid is so clean, most of the carbon emissions from your home – 90% to 95% – come from burning fossil fuels, with just a small part from electricity.

How can you reduce the emissions from fossil fuels in your house? Stop using them and go all electric! It’s less well-known, but conceptually the all-electric house is the stationary equivalent of the electric vehicle. And homes can go all-electric now because we have efficient electric alternatives to fuel-fired equipment: induction stoves for cooking and heat pumps for space heating and hot water.

Induction cooking heats the pan rather than the whole room and is much more responsive than the old electric resistance heating coils. Chefs even like them! But if you really love your gas stove, don’t feel too guilty – it’s a tiny fraction of your fuel use.

Heat pumps are air conditioners that can run both ways to provide heating in the winter and cooling in the summer. They come in two different flavors, air source heat pumps, which typically have condensing units that sit outside and ground source (aka geothermal) heat pumps, which utilize underground piping, which you won’t see. Geothermal systems are more efficient but are more expensive to install.

Let’s do the math on switching your home to electricity from fossil fuel. If you burned ten gallons of propane on a cold winter day, you would generate 127 pounds of CO2. If you used air source heat pumps instead that would decline to about 22 pounds of CO2 or 17 pounds for more efficient ground source heat pumps. And as New York’s electrical grid becomes carbon neutral by 2040, the 40% of your emissions from your house declines to zero.

Let’s pause for a moment to register how conceptually simple it is for you to achieve deep carbon reductions now without changing your lifestyle. In upstate New York, if you electrify your house and your car, you will reduce your total carbon footprint by roughly 70% today, growing to an 80% reduction by 2040. Tackling that last 20% will probably entail lifestyle changes in what you eat and purchase and/or large-scale changes in agriculture and industry.

Electrifying your home will cut your energy costs, too. You might pay $25 or $30 for the ten gallons of propane you use on a cold day, and more this year since costs are unusually high. For the equivalent amount of heating, you would pay about $20 if you used air source heat pumps and $15 with geothermal. Also, your energy bills will be less volatile. Because fuel generates a small fraction of upstate New York’s electricity, your utility prices won’t go haywire with each global energy shock. The same goes for the expense of running your electric or plug-in hybrid car.

If you’re building a new house or making an addition, it’s a no brainer to go all-electric from the get-go. It will reduce your utility bills and eventually shrink your new home’s emissions to zero. That’s why 50 California cities and New York City have recently banned gas equipment for new construction.

Electrifying your existing home is a more complicated decision since it will entail removing your existing fuel-based systems and installing new electric ones. The costs pencil out better if you electrify when your heating equipment needs to be replaced, since you would need to purchase new equipment anyway. Or if you’re adding central air conditioning since you can use the same system to supply both heating and cooling.

Replacing the hot water system with an electric heat pump in your existing home is straightforward – you just swap out the heating unit. But for space heating, you need to study the overall system. You could run into complications if, say, your existing baseboard radiators won’t work with the temperature range that heat pumps can supply. Informed contractors should be able to advise you.

Sweetening the pot are a raft of incentives for heat pumps – federal tax credits, rebates from Central Hudson, and New York State programs.

The Power Brokers: a selective history

So how did upstate New York’s power grid get so clean? A veritable who’s who of New Yorkers, from Nikola Tesla to Franklin Roosevelt and Nelson Rockefeller, contributed. The story falls roughly into four phases.

Remember that I said we would circle back to Niagara Falls? In the first phase, New York harnessed two of our great natural resources, Niagara Falls and the St. Lawrence River to create power. It started with mills, built first by the French, then the English, and finally New Yorkers after independence. Then it switched to hydropower, with the first Niagara electrical plant being developed in 1882.

Concerned about the private ownership of power generation, then Governor Franklin Roosevelt created the precursor to the New York Power Authority in 1931 to ensure public access to power. Under Robert Moses’ leadership in the 1950s, the Authority built the vast hydro plants at Niagara and along the St. Lawrence.

The energy crisis of the mid-1970s precipitated the third phase, energy efficiency. In 1975, the NYS Atomic and Space Development Authority was repurposed as the NYS Energy and Research and Development Authority (NYSERDA) and was charged with reducing energy use and creating renewable power. NYSERDA became one of the best funded state energy entities in 1996, when it began to be funded through a surcharge on electrical bills.

Three years ago, the state mandated zero emission electricity statewide by 2040 – the most ambitious target in the country, and NYSERDA’s ample funding – over $1.7 billion in 2022 – is a big reason we can achieve it. The mandate effectively launches phase four, large-scale deployment of wind, solar and storage, which are now less expensive than new fossil fuel plants. Unfortunately, many New Yorkers are unaware of our zero-carbon target and our tangible progress since we all deserve to be proud of our state’s leadership.

You can see the beneficial carbon impact each of these phases have had on our grid. About one-third of upstate New York’s power comes from hydropower and another one-third from nuclear, with about 8% coming from wind, biomass, and solar. Just one-quarter comes from natural gas. Over the next 18 years, we should expect to see renewables grow and natural gas sink to zero, at which point your all-electric house and car will be carbon neutral.