It is time to restore passenger service on the Berkshire (Housatonic) Line.

Major efforts are underway in Connecticut and Massachusetts that now demand public-private partnership and active coordination between elected officials and departments of transportation. Restoration of the Berkshire (Housatonic) Line will result in an active, year-round service with six to eight trains per day in each direction from Grand Central Terminal to Pittsfield, Massachusetts, with stops in six or more towns in western Connecticut and Massachusetts. The line will also provide train service for those seeking to travel between towns.

This project will restore a well-known and popular passenger service that died, along with similar passenger rail services across the country because the government prioritized automobile travel during the 1960s. Times have changed: younger people don’t want to be behind the wheel of a car, and all of us are rethinking transportation options because of traffic congestion, the damage to health caused by emissions, and of course climate change. Until 1971, the Berkshire Line carried passengers from Grand Central Terminal through western Connecticut along the Housatonic River. (See it for yourself in a clip from the documentary The Last Train 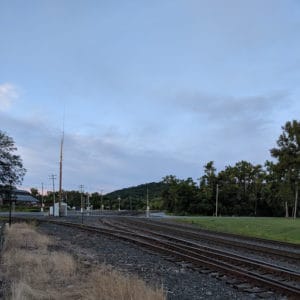 Tracks outside the Amtrack station in Hudson NY

to Pittsfield at traincampaign.org). The tracks remain in place and are is in active use as a freight line. The rights of way are clear, and the states of Connecticut and Massachusetts own most of the track.What makes this possible now? First, a massive upgrade is now underway on 37 miles of track in Massachusetts. Next, Governor Ned Lamont’s Draft Transportation Bill includes the extension of Metro-North service past Danbury to New Milford. Finally, Danbury Mayor Mark Boughton has announced that the city is making plans for a restored rail link to Southeast for faster commuting to New York City. All these projects will restore sections of the Berkshire (Housatonic) Line.

To paraphrase the late astronaut Neil Armstrong, “One small step to New Milford, and one giant leap towards extending passenger rail to northwestern Connecticut and the Berkshires.” Massachusetts is out in front. In 2014, its legislature passed a transportation bond bill that included money to purchase the 37 miles of track in the state from Housatonic Railroad for $13 million. They are also making a commitment to upgrading the line, with some (but by no means all) of that future expenditure contingent on Connecticut’s involvement.The purchase documents are clear: “The acquisition of the subject Railroad Assets is one step in what MassDOT anticipates will be an involved, multi-step process that ultimately will lead to the establishment of a new railroad passenger service route in the Northeast.”After Governor Deval Patrick stepped down in early 2015, the Massachusetts MassDOT downgraded the project, saying that they would not continue the effort because Connecticut wasn’t interested—and was, in fact, facing major financial difficulties.Nonetheless, upgrade work on the line began in July 2018, and a $30-million infrastructure project is underway now in Berkshire County. The track and tie work is scheduled for completion in 2020, and further work on the line is planned for 2020 to 2024.

Restoring service on the Berkshire (Housatonic) Line—including all engineering and safety upgrades, new stations, and operating equipment—has been estimated at a total of $200 to $250 million, with plans to break-even on ticket sales at prices comparable to Metro-North. The benefits offered by a restored, daily, year-round passenger service are tremendous. A Berkshire County study in 2010 estimated nearly a billion dollars in economic benefit to the county for over ten years. In addition, there are myriad benefits to citizens in terms of the environment, public health, and employment and educational opportunities—and increased tax revenue. Passenger service on the Berkshire (Housatonic) Line will complement economic development initiatives such as the New Milford Riverfront Revitalization and the restoration of the Canaan Depot, as well as work being done by bicycle trail advocates and environmental groups. To be sure, the year-round population of Litchfield County is under 200,000. But the cost of restoring the Berkshire Line is a small fraction of what a major urban rail project requires. There are few impediments, and return on investment can come quickly. Many new passenger rail projects have found that ridership far exceeds expectations. The Berkshire Line is particularly promising because it will connect southern Connecticut and New York City with routes to Albany and Boston: a new rural-urban network that will be a model for 21st-century living.

Karen Christensen
Founder and president of the Train Campaign

Reports on projected ridership and economic impact as well as station locations in Berkshire County are available at https://barringtoninstitute.org/studies-reports/. See The Last Danbury to Pittsfield in 1971 in this clip: https://youtu.be/eyiMh_2NzY4

Karen Christensen is an American entrepreneur, environmentalist, and founder of the Train Campaign, www.traincampaign.org. Karen was senior academic editor of the Encyclopedia of Community (SAGE) and the Business of Sustainability (Berkshire) and is the author of popular environmental books including Home Ecology (Fulcrum) and The Armchair Environmentalist (Hachette). She is the owner and CEO of Berkshire Publishing Group, a member of the National Committee on United States-China Relations, and a trustee of the University of Pennsylvania Press. She grew up in Silicon Valley, started her career in London, and has lived in Great Barrington since 1995.