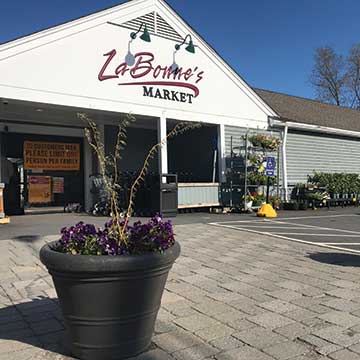 These days, there are some places you just don’t want to go, and then there are places you just shouldn’t go. In his recent interview with the master of macabre, Stephen King, The New York Times’ David Marchese went to the latter.

He challenged the horror writer with an all-too-real scenario: you’re a germaphobe, stuck at home during the current crisis, and you’re running out of food and unable to get a slot in online ordering. What do you do?

King leisurely considered the options, finally settling on his house as the best option. It’s Lysol-ed, and he’s been fastidious about washing his hands and keeping clean. But he’s just “so, so hungry. What am I going to do for food?” Then he looks around, and he says to his dog: “‘Fido. Come here, Fido.’”

Sick, yes. But the point isn’t simple horror. King’s ability to mine our psyche for our greatest anxieties is at the core of what has made him so successful. What, indeed, would you do if you ran out of food these days?

Right, right. We shouldn’t go there. Fortunately, we don’t have to, because throughout this pandemic, we have been served by an armada of small, local grocery stores that have dramatically adjusted their operations to meet the needs of the communities they serve. Without them, Fido’s days would be numbered.

All grocery stores have provided essential services throughout the pandemic, but our local independent grocers have made swift alterations to their business to address the needs of the communities they serve. Case in point: LaBonne’s Market in Salisbury, CT.

Since this era began, I’ve shopped at grocery stores in four states, and LaBonne’s is the only one that has taken my temperature before allowing me in the store. I appreciate the extra measure of caution, and so do the residents (and temporary residents) of Salisbury. With one of the highest median ages of any town in Connecticut (55.1) and an influx of second-home owners from New York City, the concern about infection is great, and LaBonne’s sensitivity to this situation makes it the market of choice for many residents.

It’s easy to forget that LaBonne’s exists, sequestered as it is in a modest building off of Main Street in Salisbury. No garish signs proclaim its location, apropos of its Norman Rockwell setting, yet it is renown among local gourmets and Appalachian Trail thru-hikers in search of fine food and groceries.

In the early stages of the COVID-19 crisis, however, LaBonne’s customers were more concerned with finding even generic versions of products such as toilet paper and bleach. At that time, LaBonne’s business surged 300% according to owner/manager Bob LaBonne – an unmanageable deluge of purchasing for any grocer, but one that, as it turned out, was easier for small chains like theirs to manage than larger corporations such as Big Y and Stop & Shop.

After the initial wave of stockpiling abated, stores with greater flexibility and autonomy in their supply chains were able to tap into multiple suppliers for off-brand staples. So while you couldn’t get your hands on Clorox or Charmin, you could get 101 Bleach and Cascades Select Pro toilet paper, products available through the commercial cleaning industry that were not being used to restock the vast number of shuttered offices and stores.

That kind of creativity and innovation comes with running a small business, and LaBonne credits the Entrepreneurs’ Organization of Connecticut with connecting him to other business leaders around the state to share ideas and solutions for these and much less daunting problems.

Those ideas, however, feed a much more intense and personal flame in LaBonne, himself. From the outset, he has maintained three priorities, in order: keep his employees and families safe, protect his customers, and look out for the store and profits. These concerns have oriented LaBonne’s decisions, dictating the safety measures he has implemented in Salisbury. On March 27, just a week or two into the shutdown, LaBonne placed an order for infrared thermometers to assess every customer entering the store, long before the time when far less stringent measures would be recommended by government officials. He installed curtain-style barriers at the deli and meat counters to allow continued service in those two popular departments, and most importantly, he listened to his employees. They appreciated the partitions at the check-out lines, but were concerned about infection from customers standing behind them. LaBonne’s response was to hang clear shower curtains to protect his cashiers, one of several safety measures that he personally installed.

As a former heart-attack victim whose wife works in Charlotte Hungerford Hospital’s Intensive Care Unit, LaBonne is intimately attuned to the stressors of front-line essential workers, and the wellspring of his leadership is his empathy. Among his financially questionable decisions are a two-dollar-an-hour raise for all associates, a ten-percent increase in the employee discount (to 30%), and his move to temporarily close the store on Sundays to the tune of $150,000 in lost revenue each week.

Against that ledger, however, he reckons the human gains in employee satisfaction and safety. In Salisbury, much of that workforce consists of high school students and recent graduates, many of whom apply based on the word-of-mouth of their peers. It’s not just that they want jobs, but they want jobs where they are respected. Couple that respect with the service LaBonne’s provides for the community, and all of the financial losses incurred by the grocer dissolve in the spiritual sense, yes, but even in the financial sense. LaBonne’s customers have continued to patronize their market throughout the pandemic, offsetting any losses with an eighty percent increase through May of 2020. The surge in shopping required additional on-site storage, and LaBonne worked in concert with First Selectman Curtiss Rand to waive zoning regulations and bring in a refrigerated unit for the purpose.

Another gesture of the town’s appreciation for the store was the GoFundMe page that LaBonne’s patrons created. It raised $8,000 to provide a bonus to all sixty employees of the store, eclipsing their $5,000 goal in less than a week. While crises such as this one often raise the specters of deprivation, loss, and suffering, it is more often the case that communities rally to support and comfort each other, calling on the deeper reserves of generosity and caring that make us human. Sometimes the acts are grand gestures, but more often they happen at a personal level, one to another, even at your local grocery store. •