It’s a long way from Ghana to playing professional soccer in the United States. But it is a journey that 22-year-old Eddie Opoku has made with one important local stop along the way, at the Millbrook School.

A 2015 graduate of Millbrook, Opoku went on to attend the University of Virginia until 2017, at which time he left after his junior season when he was selected by the Columbus Crew of the Major Soccer League (MSL) SuperDraft as the 32ndoverall pick. He made one start for Columbus and five appearances before he was loaned out to Birmingham Legion of USL (United Soccer League). Birmingham (Alabama) competes in the USL Championship, considered the second division of American soccer. The MSL is considered the elite professional soccer league in the United States.

“The coach for Birmingham (Tommy Soehn, who was a part of the Crew staff last season and worked with Opoku after he joined Columbus) asked Columbus what their plans were for me,” said Opoku. He was in Millbrook recently to visit his host family and friends as he rehabilitates from an injury that sidelined him after playing in 18 games this season and scoring a goal. He hopes to get back and play a few games before the season concludes. “ Columbus talked to me about being loaned out to Birmingham believing that it would help my development. I’m young and I didn’t want to sit around and it was best for me to play and develop with Birmingham and then go back to Columbus.”

It took Opoku, a slender forward who stands 5-foot 7-inches and weighs just 139 pounds, some time to adjust to his new team. “I was playing out of position and had some family issues. I also had some nagging injuries, but I finally got into a groove and was playing well and the team was doing well and on a winning streak. Then I got injured and it was very tough for me to deal with that. It took a toll on me mentally. But I’m working hard to get back in condition and rehabbed from my injury. I plan on trying to add some weight and strength during the off-season.”

Opoku came to the United States at a young age. He was entered into the Right to Dream Academy in his country after a successful tryout at the tender age of 10. Many children from the Academy are invited to attend prep school abroad and the Millbrook School accepted Opoku as a freshman in the fall of 2011.

That he landed at the Millbrook School was most fortuitous for Opoku, as he was met with open arms and became a top athlete and student at the private school. After a bit, he was invited to take up residence with the Lang family and Opoku credits them with giving him the best of supervision and support. He still calls the family his family now, and Christina Lang his “second mom 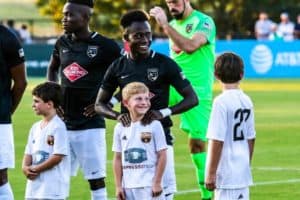 ”. He stays with the Langs whenever he is in Millbrook.

“I was moving from one house to another for awhile when I came to Millbrook. Robert Lang was in my class and he and I connected. He invited me to his family’s house for a long

weekend and his mom was very nice and asked if I wanted to stay with them. I said yes and I still call their place home. I had so many great people help me at Millbrook, from my coaches to my teachers.”

He continued, “My soccer coach (Rick Williams) wanted to see how I played so he put me in a game. I was small but very quick and he said I reminded him of himself as a player. I grew as a player at Millbrook and learned the way the game is played in America. In Ghana soccer is all the kids play. I felt that when I came here I had to put 150 percent into it because I wanted to help my teammates and make them better players. All of the kids were amazing, helping me on the field and in the classroom.”

Along the way, Opoku learned to speak almost impeccable English, a far cry from when he arrived in the States. “I feel like if I treat soccer like I did learning English and put the same amount of time and effort into it I can achieve anything at the professional level.”

Back home in Ghana (the town of Konongo), where he visits on occasion (he talks to his mom by phone as much as he can), he is considered a conquering hero.

“Being a professional doesn’t come often to kids in Ghana. When I went back I saw kids with my last name on the back of their shirts or written on the skin on their backs. My mom and family and everyone back home are very proud of me that I made it to the pros. I remember coming to the United States and being on the 37thfloor of a building in New York City and looking at all the skyscrapers. I wish every kid in Ghana could have that experience. I hope I can inspire other kids to do what I have done.”

Eddie Opoku is off to a good start doing just that.