Millbrook’s Museum in the Streets 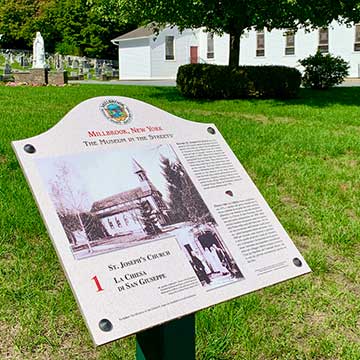 Anyone who visits Millbrook, NY, will likely notice a series of panels mounted on posts that bring them to a comfortable reading level. Once noticed, they do seem to mushroom. In fact, there are 29 in all, three of which are most accessible by car; otherwise the panels, recounting the lives, occupations, and dwellings of Milbrookers through the ages, are by their very nature “for pedestrians only.” They militate in the nicest possible way against the tendency of people to rush from one errand to the next, barely noticing much more than the oncoming traffic or the quality of the fall foliage. (Millbrook’s main street is lined with thornless honey locusts, a tree that tolerates drought and road salt, and turns bright yellow in fall.)

Museum in the Streets

Based on the copyrighted model of a program named Museum in the Streets – a learning experience, via self-guided walking tours – panels proffer well-researched narratives accompanied by archival photographs culled painstakingly from historical societies, libraries, and private collections. In the case of Millbrook, they tell a detailed story of the village’s Quaker beginnings and the arrival and impact of Irish and Italian immigrants in the late 19th and early 20th centuries. All MITS installations feature a second language, and Millbrook’s is Italian.

In a world where many people work and play in a version of solitary confinement, museum-going and other public activities have sometimes suffered, especially in small communities. In which case, reasoned Patrick Cardon, originator of the global MITS program, why not bring museums, in particular small ones, to the people? “The idea germinated because of a lack of information and a feeling of being lost in a fantastic environment,” says Cardon, an art historian and Egyptologist at the Brooklyn Museum before becoming secretary-general of the International Council of Museums in Paris, an organization that “protects and promotes the museum profession.” While in France, Cardon became active in a local historical society and formed a business to bring history into focus, as one might say, at street level. When he moved to Maine, having brought MITS to fifteen municipalities in France, his business model came with him.

The program has grown slowly, as is often the case for community-wide initiatives with limited budgets. Thomaston, ME, was the first American town to participate, in 2003, and to date Maine has ten member sites, the most of any state.

The next year Hastings-on-Hudson was the first town to sign on in New York, not least because of a vibrant historical society and the involvement of the recently deceased historian and writer David McCullough. Wherever the villages, towns, and even a few cities are located, illustrated accounts of collapsed bridges, May Day celebrations, disastrous fires, parades for every occasion, the realities of war and their remembrance, the struggles of immigrants, the advent of railroad service, then its demise…all are laid out for the curious stroller or a high-school historian in the making. The panels are positioned before the very site where something of note once stood and has vanished or, against many odds, survived.

How to do it

The process of approval, funding, research, and installation varies with the size of the undertaking and the enthusiasm of townspeople. If you shy away from meetings, you might not be the ideal proponent of such a project; “community” is a byword, opinions are many, and then there is the task of research, some of which may already be in place, some not, followed by the writing of synopses, gathering of illustrations, translation into a requisite second-language….

On the brighter side, pride in one’s home town or neighborhood and the desire to teach future generations about what they may initially think of casually or even dismissively as “the past” are powerful motivations. MITS is a big-picture vision made up of many small ones.

Looking into the faces of those long gone

Millbrook’s heritage trail, if you like, came together in 2014 as the result of an anonymous grant, individual contributions, and, not least, the determination of village leaders. Looking over the entire 29 panels, absorbing the details, staring back into the faces of people long dead who shaped village life, can be daunting. It’s the sort of experience that I at least would want to take in slowly, on repeated visits.

With distance, several key periods fall into place: the early times in the mid-18th century, when Quakers first settled the area; the arrival of train service in 1869, which changed everything and required the village to give itself a name, Millbrook Farm; the decades before and after the turn of the century, when immigrants first from Ireland and then from Italy arrived, businesses took root, churches and schools were established, and the surrounding grand estates brought money, prosperity, and a leisured class to the countryside.

The Haight, Hart, and Thorne families were landowners, entrepreneurs, and Quakers, the colonies’ third-largest religious group before the Revolution. Philip Hart owned orchards and developed mills along the tributaries of Wappinger Creek; Harts Village is Millbrook’s oldest neighborhood, with residences dating back as far as 1750.

The Thorne family has endured, donating land and the three-story Beaux Arts buff-brick and limestone building that would become the village high school from 1895 until 1962. (A newspaper article had criticized Millbrook for lagging behind in public education, which prompted the grandiose gift – the Thorne Building was listed on the National Register of Public Places in 1996 – and in turn obligated the village to incorporate). Though you won’t find this on the panel, the building has recently been taken in hand by the Millbrook Community Partnership to be revitalized and repurposed as a state-of-the art landscaped community center.

With the Dutchess and Columbia Railroad’s arrival, the rate of change accelerated. Sheep pastures and orchards were laid with tracks and threaded with access roads. Today’s Merritt Bookstore was erected as a warehouse for grain, freight, and the firehouse stands where Millbrook House hotel, c.1870, welcomed guests for a newly developing summer season. Railway maintenance gave jobs to Irish immigrants, driven westward by the 1840 potato famine, who otherwise were finding work on the local horse farms.

The first commercial structure, Thompkin’s & Smith General Store, was moved in 1870 from nearby Harts Village to a lot on Front Street across from the current (and only) service station in Millbrook, protected under the terms of the Thorne family’s gift of Tribute Garden. The view of this section has changed little with time. The hardware store, which carries the Reardon name from the 1890s, has continued in the same building, and remains in the Flanigan family, who purchased it in 1963.

The village bank building was first a railway office, then a pharmacy, and as of 1891 was the precursor of today’s Bank of Millbrook, having survived the Great Depression. The train, however, did not, and in 1930 the great railway adventure was stopped in its tracks, and the wagons’ iron wheels were sent to be melted down for the coming war effort.

It was in 1890 that the wave of Italian immigration to cities and towns in the Northeast began in earnest. Young men from southern Italy came as day-laborers and stonecutters, escaping the lack of opportunity at home, although about half of the immigrants, disillusioned and ambivalent, eventually returned. The great gift of many of those who remained was the stone masonry that became Millbrook’s signature style (rounded stone with mortar in contrast to the dry walls of New England). Systematically underpaid, these artisans were rewarded in the 1930s when FDR’s WPA construction of the Taconic Parkway enlisted their talents for the road’s many fine bridges. Alden Place had become their home turf, they’d finally (after distinguished service in WWI) been allowed to buy property, and panel 12 shows the Italian Naturalization Society, one of numerous mutual aid societies formed to help new arrivals.

Daily life, as much as is ever the case, became stabilized, its essential services well established. In 1907 Millbrook Library had moved from a room in the high school to its own building at the corner of Franklin Avenue and Friendly Lane, thanks to funds donated by the widow of a Civil War soldier, Richard Hayes. Expanded in 1973 and 2002, the library has long been a vibrant locus of village life. Parades traditionally celebrate village people, pets, and festivals: the firefighters, Sandanona Hounds, the WWI Armistice when Red Cross volunteers filed past the Tripps’ butcher shop and the Women’s Christian Temperance Union.

For fifty years (1920-1970) teenagers hung out at the ice cream shop where today’s deli is. Across Church Street the store pictured on panel 15 was a news/tobacconist during the 1930s and 1940s and became, under the ownership of John and Marilyn Kading, The Corner News, a sort of village turnstile (at Millbrook’s only traffic light) from 1947 through 1999. The first resident I met during a coffee break from my house search was sitting on a sidewalk bench here, his paper on his lap, his golden Lab stretched out at his feet, his smile exuding contentment – all good signs! More recently, during a three-month period in 2020 when restaurants were closed by the Covid pandemic, Millbrook’s fifties-era silver diner distributed 9,000 free hot meals to people in need.

There is so much more to tell, but the rest is for those who visit Millbrook to discover as they move among its lovingly created street museum, free to the public and open every day, rain or shine. 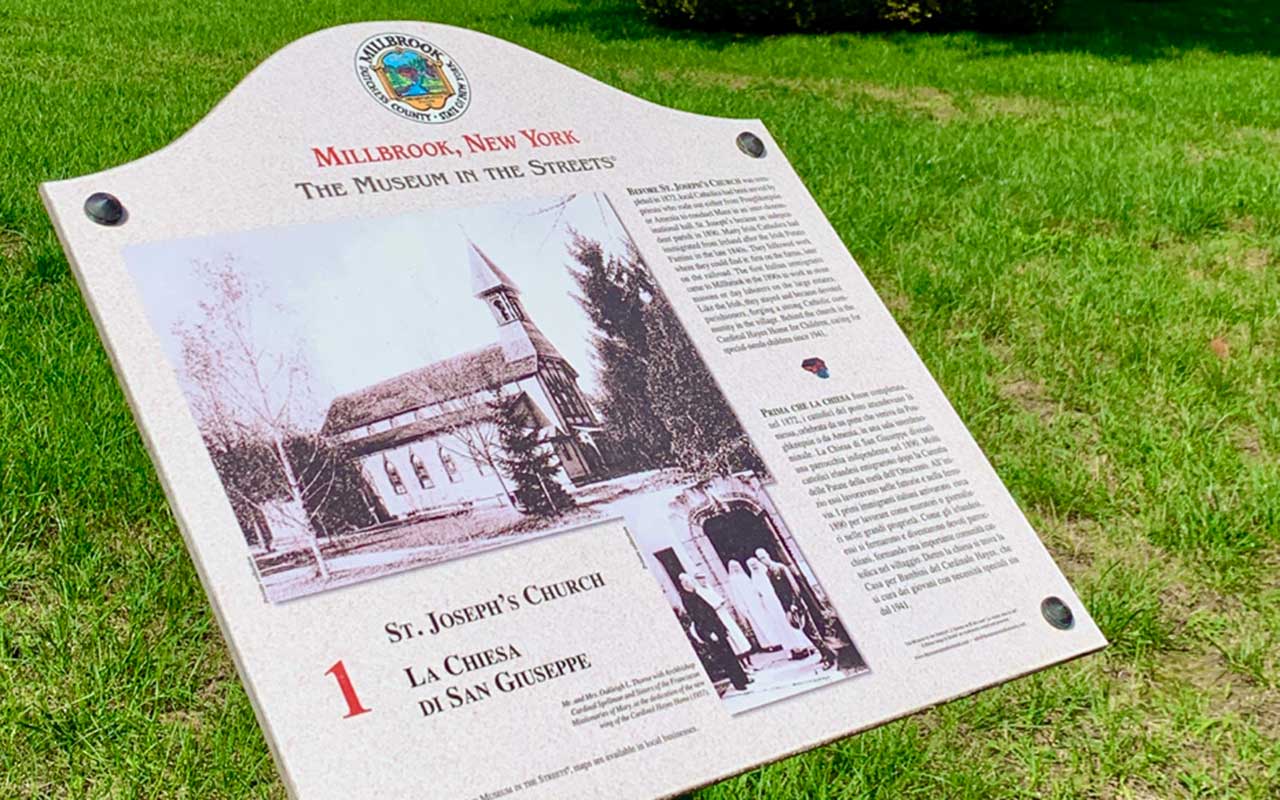