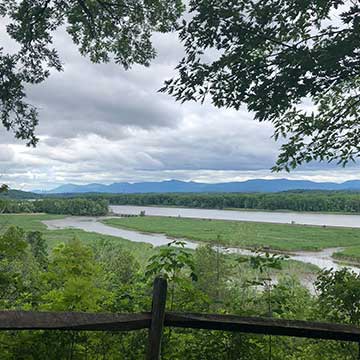 The Siegel-Kline Kill Conservation Area is one of ten that is maintained by the Columbia Land Conservancy (CLC) in Columbia County, NY. It might be one of the smallest, and it might be one of the least varied, with its simple mile-long loop that is mostly flat. It’s easy to miss when you’re driving out of Ghent on County Route 21, which is a main thoroughfare to Valatie and points north. From the road it looks like, well, a big field and not much more.

I thought of it that way until I learned that it is also home to a designated sledding hill. Some like cross-country skiing, some like snowshoeing, many enjoy both. But I like sledding. I’ll go by myself if I have to, and there was a great little hill on our property where you could get some speed up, but you had to bail before sliding out onto busy Route 66 – or else. That made it too risky for full-out fun. And too scary where my kids were concerned. So after a snowfall, when the roads were clear enough, we’d rescue the sleds from the top of the barn and head off to nearby Siegel-Kline Kill. Sometimes we had the hill to ourselves; often there were others reveling in its safety – and speeds.

Falling in love with a place

The sledding hill was my introduction to a place that I came to love deeply. I resumed a running practice on its loop, preferring the packed earth there to paved roads and sidewalks, and knowing the hill was there for a challenge if I wanted one. I ran there in all seasons, at different times, even in just the light from the full moon. I came to know the family of deer there, the variations of wild flowers and plants through the seasons, the different birds, the smells, the sounds. Occasionally there were other people there, many of them with their dogs, but not often. It was – is – an oasis of quiet.

When I talk about Siegel-Kline Kill, I do so with reverence, the same way that others I know talk about their favorite Conservation Areas: Ooms, High Falls, Schor, Borden’s Pond, Greenport, and the others. No matter where you live in Columbia County, there’s a Conservation Area nearby, from the southernmost site of Overmountain in Ancram to the northernmost site, Hand Hollow, in New Lebanon.

I’m subjective on this matter, for sure, but I’m lucky to have traveled to many places, and Columbia County is at the top of the “most beautiful” list. Ask anyone who’s lived there a very long time or who’s just visited once what a favorite thing about the place is, and they’ll mention its beauty. There’s the reverence again!

About the Columbia Land

Perhaps no one talks about the county’s amazing Conservation Areas and other natural resources more reverently than the folks who make them possible for the rest of us, the staff of the Columbia Land Conservancy.  When people recognize that “something special,” the instinct kicks in to protect and preserve it. That’s what the Columbia Land Conservancy is all about, and they’re active in so many ways. Learning about them is a little like getting to know one of the Conservation Areas – the more you come back, the more you find out, and the more you understand – and care.

Founded in 1986, the CLC was established to preserve and protect the natural resources and beauty that so characterize Columbia County. CLC’s offices are on Main Street in Chatham, where the storefront display is loaded with all things eco-friendly and educational around conservation and the environment in Columbia County and beyond. I caught up with three out of their dedicated staff of twenty to talk about the CLC.

Heidi Bock is the conservation education manager. A native of Columbia County, Heidi has been an integral member of the CLC staff for 16 years. As such, she has a unique perspective on what keeps Columbia County so attractive. “The Land Conservancy is working on both the county and community levels,” she explained, “to both protect the resources here, and to connect people to the land. We’re here to protect the high quality natural resources of the county,” she says. “While CLC’s mission has evolved, its ‘work with the community to conserve the farmland, forests, wildlife habitat, and rural character of Columbia County, strengthening connections between people and the land’ has remained a central theme.”

Making connections to protect and preserve

For Heidi, the connections are essential and ongoing. “We work not only with people in the community, but with organizations and businesses that can be helpful,” she says. “Every private easement land owner is a partnership in perpetuity, since the easements we work out with them are forever. Each and every one helps protect the high-quality, natural resources of the county. To that end, we are constantly looking for ways to engage the community. We work with the schools, the libraries, arts organizations, agricultural and economic organizations,” she says. “How do we build the next generation of conservationists? That’s something we think about a lot.”

For Troy Weldy, CLC’s president, the organization has a wide-reaching platform that extends not just to conservation and preservation, but also the contribution of the land to its populations. “For example,” he says, “the county’s energy is largely imported, and there’s a state mandate that 80% of energy be from renewable sources by 2050. How do we think about the power of nature to power our lives? If we can generate home-grown energy, what changes might that bring to the landscape? It’s an important and pressing concern,” he says.

“Another example is agriculture,” he continues. “This is a big part of Columbia County’s history and another precious resource. We are here to help farmers keep their land and keep it farmed, for the present and the future.” For the past decade, the CLC has had a Farmer-Land Owner Match Program to partner young farmers with land owners who own viable farmland. There have been over 80 matches made to date. “I’d like to see migrant workers be able to own land,” he adds. “Farm ownership could be available to them, as well.”

Troy is new to the CLC, taking over from long-time executive director Peter Paden just last fall. In his previous position as director of lands at The Nature Conservancy of New York, he led the organization’s conservation strategies, natural climate solutions, and land management, among other things. Combined with his background as a botanist and forest ecologist, this gives him a great perspective on what’s possible for Columbia County relative to its neighboring counties and the rest of the state. “CLC is a vehicle for bringing state resources to the county to continue to purchase easements on farmland to protect it,” he says. “The pandemic has caused land values in Columbia County to jump by 40%. It’s more important than ever that we help farmers hang on to the land.”

Another influence of the pandemic was a boom in visits to the Conservation Areas. According to Rebecca Walker, CLC’s communications and grants manager, who’s been with the organization since 2015, “the amount of visitors to the sites doubled in 2020.” Getting outside was one of people’s only recreational options through lockdown. “We knew how much people appreciated the Conservation Areas before the pandemic,” she says, “but we had an outpouring of love from people who took to them in droves with the shutdowns. That’s when you realize the very real importance of public access to the land,” she continues.

“We’ve learned a lot from this experience,” she says – which is no small thing for an organization that is constantly upping its game. “We’ll be adding additional signage to the Conservation Areas so people understand more about the terrain and can make more informed choices about their accessibility on an individual basis.”

When I ask Rebecca what she particularly likes about Columbia County (she’s from northwestern Pennsylvania originally), she quickly replies, “The connections and stories we all have here that are based on a love of the land.”

For Troy, who’s from southwestern New York, it’s “the different topography of Columbia County, which speaks to its beauty and value. It fluctuates from tidal wetlands to the high peaks of the Taconics. I’m amazed by how much surface water is in the County – as well as large tracts of forest.”

“I love exploring the land with people!” Heidi says emphatically. “Leading educational programs and watching both kids’ and adults’ eyes light up when you flip a log and find a salamander is always a thrill.”

I am reminded of another stand-out experience that wouldn’t have been possible if it weren’t for the  CLC and all it does. A friend and I met to take a walk at Ooms in East Chatham on a sunny Sunday in September in the late afternoon. When I pulled into the main parking area to meet her, I was surprised to see it was practically full. Fortunately, others were leaving as we were arriving, so we found spots. Masked and ready, we started on the familiar path. It was a classic fall day, with the sinking sun setting the treelines on fire and casting long exaggerated shadows. We stopped often to take pictures. We weren’t alone. We met people we didn’t know, and people we did, which is also typical of Columbia County. We couldn’t see them behind the masks, but we could tell that everyone was smiling, delighting in the simple and breathtaking spectacle of the place.

These experiences and observations are truly the tip of the iceberg for the CLC, where a staff of 20 oversee the areas of conservation, public lands, agriculture, stewardship, philanthropy, and development. “One of the reasons Columbia County is so beautiful is because of the CLC,” Heidi says, and if anyone can speak to that, she can.

The Columbia Land Conservancy’s website is a treasure-trove of additional information and resources. Explore it at www.clctrust.org. Follow them on Facebook and Instagram, where you’ll be kept up-to-date with happenings, sightings, and great pictures of nature. Be sure to let them know what you love about the County.