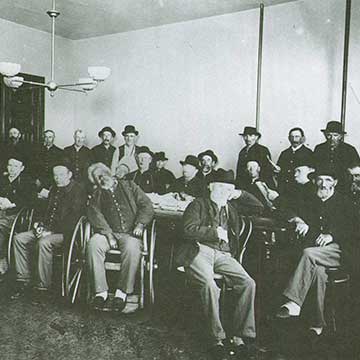 In the winter of 1863, Lewis H. Starr was a 36-year old laborer from Sharon, CT. Finding it hard to support his wife and son, Starr took advantage of the cash inducements offered to men to join the Union Army. Starr traveled to Bridgeport, where he enlisted in the 29th Connecticut Infantry, a unit comprised of African American soldiers.

Starr was wounded in a skirmish at Kell House, Virginia, in October 1864, but it was a hernia he suffered while performing manual labor for the Army that ended his military career. Discharged in March 1865, he was unable to work again and his condition deteriorated to the point that Starr’s family could no longer care for him, and he moved to Fitch’s Home for Soldiers.

Benjamin Fitch and the founding of the Home for Soldiers

Open from July 4, 1864 to August 28, 1940, Fitch’s Home for Soldiers in Darien, CT, welcomed and housed hundreds of orphans and thousands of American veterans throughout the years. Although eventually boarding veterans from the Indian wars, the Spanish-American War, the Mexican War, and World War I, philanthropist and millionaire retailer Benjamin Fitch first opened the soldier home for men who served in the Civil War and for orphans whose fathers had died in that conflict.

Fitch’s personal involvement in the Civil War began when he funded a local regiment with his own money in 1861. Fifty-nine when the war broke out, an 1866 edition of Harper’s Weekly described Fitch as:

“too old and infirm himself to shoulder a musket, and appreciating the tender anxiety of those who by going to the field must leave behind their wives and children, [. . .] promised a large number of men to take under his care all who should be left by them.”

His concern for the men fighting for the Union cause grew as the war’s casualty lists lengthened, and he ultimately founded – at an initial cost of $100,000 – the soldiers’ home to care for those who could not care for themselves.

A support for Civil Rights

Fitch was a strong supporter of the Union, a trait common among many Northerners. What set Fitch apart was his support for civil rights. When he began the home for soldiers, he opened its doors to both white and black veterans. With information about the Fitch Home available from the Connecticut State Library, it can be calculated that 2.9% of Connecticut Civil War soldiers were black soldiers, while 3.1% of soldiers at Fitch’s Home for Soldiers were associated with black regiments in the Civil War. Of the soldiers at the home, 2% were from the 29th Connecticut Regiment – one of two Connecticut units comprised of black soldiers – including Lewis Starr of Sharon. Shockingly, by 1890, 50% of white veterans of the Union army were still alive, compared to only 30% of African American soldiers. Inferior medical treatment was one reason for this; while black soldiers constituted about 10% of the total number of Union soldiers, they accounted for 20% of deaths during the war. Along with the physical and psychological adversities that both white and black men acquired from the war itself, black soldiers also dealt with the ramifications of their pre-war lives, many of which involved enslavement.

Fitch’s Home for Soldiers was not unique; there were other such facilities across the country. Those, however, were run by the government, not by a private citizen. In these other facilities, black veterans faced discrimination and hardships, mirroring that outside the home’s walls. Amongst fellow soldiers, historian Kelly D. Mezurek has noted, “the belief in a brotherhood of soldiers over pervasive racial attitudes went only so far.” Veterans in homes across the United States shared that full equality was difficult to achieve within the whole group because of the attitudes of white soldiers. This attitude was compounded by administrators. In many other soldier homes across the country, it was common for administrators to separate the black soldiers when eating, sleeping, or going to the barber. While Fitch’s Home for Soldiers had no specific rules calling for segregation, it remains unknown if segregation in patient rooms existed in practice. Fitch’s administrators established rules that referred to residents, regardless of race, as “patients” but while this suggested that there was no disparagement, attitudes within the home may have reflected the second-class status African Americans men faced as civilians.

Fostering remembrances and appreciation for servitude

Despite the possibility of discrimination, the African American veterans residing at Fitch’s Home for Soldiers kept alive the memory of their service during the war. Their presence living amongst white veterans made it difficult for those of the era to forget that black soldiers as well as white soldiers had contributed to – and sacrificed for – the Union war effort.

The admission of African American soldiers to institutions like Fitch’s Home for Soldiers also helped establish their claim to be treated in the same way as white veterans in the post-war era. Their presence in gatherings of veterans helped to keep calls for civil rights alive in the post-war period because such events – and places like Fitch’s Home – highlighted their contributions to the Union war effort. White residents and visitors to the home had a constant reminder of the sacrifices of black soldiers, which helped with such issues as expanded pensions and benefits after the war.

Lewis Starr died in 1906, more than forty years after the injury that ended not only his career as a soldier but his ability to provide for himself and family. Fitch’s Home for Soldiers began to deteriorate after Benjamin Fitch’s death in 1883 and was taken over by the State of Connecticut in 1888. Overcrowded with veterans from World War I, a new facility opened in Rocky Hill in 1940, a year before President Franklin Roosevelt ordered the integration of defense plants in the United States, the first major involvement of the federal government in the Civil Rights Movement since Reconstruction.

Nichole Aguilar and Josie Marks are members of the Class of 2022 at Housatonic Valley Regional High School. 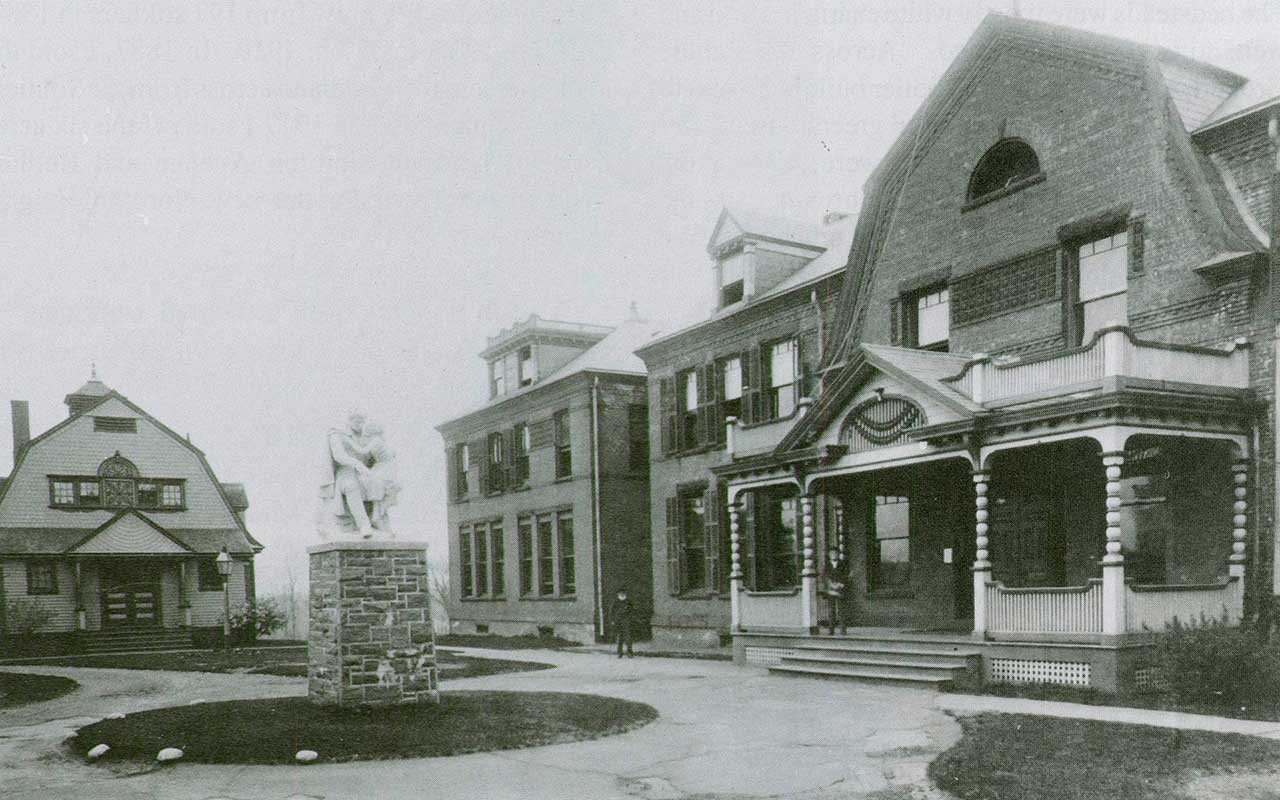