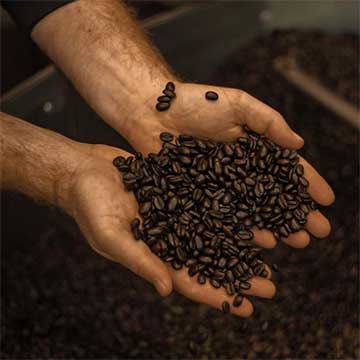 There’s something about watching someone do something they love with their hands that’s mesmerizing. It’s like watching ballet or like watching a child put a puzzle together. You become fully engaged yourself and can’t look away.

I didn’t know roasting coffee beans was as hands-on an experience as it is – or can be – until I learned all about it on a visit to Winchell Mountain Coffee Roasters in Pine Plains, NY. There, in a nondescript building across from the Central Pine Plains School District bus depot, is a company whose coffees have won over the palettes of restaurateurs, gourmands, and everyday people around the world since its founding in 1973. Its success is built on simplicity and authenticity. In fact, Winchell Mountain’s philosophy is, “Good coffee doesn’t have to be complicated.”

Willis (Will) Rivkin is the master roaster at Winchell Mountain, and when I arrived at the roastery on a sunny late spring morning to meet with him, his uncomplicated but extremely focused style was immediately apparent. There were beans that needed to be roasted, and I was going to learn by watching, not by simply experiencing the results.

Getting to know the beans

“This is the green coffee area,” he said when we got to where there were several large burlap bags of beans resting against a wall and a trough of them ready to be funneled to the roaster. Will bent over the beans that would be roasted next, sifting them with his fingers, examining them for the characteristics he is familiar with – color, structure, overall consistency. “The bags hold about 135 to 150 pounds of beans,” he explained, “and we take out about ten pounds before roasting them so they’re not too tight in the roaster.” Will lifted the handle that opened the chute for the beans to travel to the roaster, and with a whoosh they went sliding down. We descended the short stairway that took us to where the magic happens.

“We use a traditional Probat one-bag roaster,” he told me when we were beside the machine. I could hear the beans bouncing around and Will showed me where the chaff is expelled. Like grains of wheat, the beans have thin skins on them that need to come off. He shows me where the whisper-light chaff accumulates in the process.

“Coffee beans are highly flammable, which is why they need to tumble as they roast. The roasting temperature is over 500 degrees F. As the beans begin to brown, you can hear a slight crackling sound. Beside the temperature gauge on the roaster is a small handle. Will takes it and pulls it out, revealing a small scoop of beans. He looks at them, touches them, and smells them, checking the color, noting the feel, inhaling the ever-changing variations in scent, and then reinserts the scoop. He does this every few seconds.

“My dad roasted here for 45 years,” Will said. “I apprenticed with him for three years before he would let me do my own roasts.” As we talk, Will continues to pull the scoop in and out of the roaster, gauging the color and smell. Will tells me the story of how Winchell Mountain Roasters got started. His dad, Bob Rivkin, owned a restaurant in Lakeville, CT, and got the coffee from what was then called Shapira’s, a company that dated back to a roastery on 10th Street in Greenwich Village in Manhattan. Joel Shapira built the roastery that is now Winchell Mountain in the 1970s. When Bob and his wife considered getting out of the restaurant business, the opportunity to move to the Hudson Valley and take over Shapira’s came along, and they seized on it.

“My dad is all about quality and consistency,” Will said with obvious pride and affection. “The principles he passed on to me are ‘No shortcuts;’ No computers; and All that touches the coffee is heat and hands.’”

Around this time Will pointed out to me that the beans were close to the “sweet spot” he was looking for with this particular roast. He turned on the bean cooling component that’s beside the roaster. It’s a large, mesh-bottomed disc with fans below it and blades with wire brushes above that, while spinning, slowly and evenly brings down the temperature of the beans. This, too, is a hands-on process. He lifts a handle and the beans swoosh out of the roaster and fill the cooler, turning quickly but not too fast. Will runs his fingers through them as they pass, plucking handfuls to examine through the cooling.

Will reviewed some coffee basics with me. The roasting styles are Brown Roast, Fully City Roast, Viennese, French, and Italian, lightest to darkest, and Winchell Mountain does them all. Any beans can be done in any of these styles. As the roasts get darker, the oiliness in the bean is exaggerated, too. “French is slightly oily,” Will explains, “ and Italian is the most oily.” You have to understand what you’re going for when you start. With a chuckle Will explains, “My dad told me that going from a regular roast to Viennese is 15 seconds, from Viennese to French is 15 seconds, from French to Italian is 10 seconds, and from Italian to a fire is 20 more seconds.” Yikes.

“I learned by watching him, of course, and then by asking him at every step of the way. Every bean is different and has its own special qualities. We roast beans from Central and South America and from Africa. We do blends, but every bag of beans is roasted separately and then mixed in another part of the roastery later.”

When the beans are cooled to Will’s satisfaction, with another woosh they slide from the cooler into a container that gets taken to where the beans are bagged. “Everything we roast gets packaged the same day,” he says, picking beans carefully from between the sharp metal edges of the cooler blades and making sure all find their way to the next stage. Michael – who’s been with the company for years – retrieves the container and hauls it upstairs to the bagging area. Will shares that their company was the first in the United States to do vacuum packing, which requires bags that have a particular kind of vent. If air can’t escape from the bags as the beans settle, the bags will explode. The vents allow for air to escape, but not for air to enter, keeping the beans as fresh as possible.

In the part of the roastery where the beans are packed, blended, and ground, Will talked about some of their signature blends. There’s one named after his dad – Rif’s Special Blend – (“that’s my dad’s nickname”), and one named after the family Golden Retriever – Louie’s Blend. Another signature offering from Winchell Mountain is a line of Boynton blends, featuring the artwork of Sandra Boynton [whom we featured this past March]. Boynton’s charming and uplifting illustrations are cherished worldwide and are instantly recognizable. Brand recognition of this kind normally involves book-length contracts and kid-glove negotiations. “Sandy is a friend of the family,” Will said. “And she’s a huge fan of the coffee. She designed a label for my sister’s wedding, and we got to talking.” I am reminded of Winchell Mountain’s motto: Good coffee doesn’t have to be complicated. It seems this isn’t, either. Will said with a smile, “She gets paid in coffee.” Simple and ultimately satisfying.

Does Will have a favorite? For him it’s the Louie’s Blend, which he said incorporates all they do, from Yrgacheffe and Sumatran done to a Viennese roast and Peruvian done to a dark roast, with a healthy dose of Winchell Mountain magic. He creates a batch for me in a big steel blending trough, again scooping and mixing by hand to ensure the beans are well blended. “For beans,” he said, “my favorite is the African Yrgacheffee. Grown in Ethiopia, Will said that that part of the world has excellent growing and cultivating methods. Coffee needs heat, elevation, and dry air to thrive. The only places it’s grown in the US are Hawaii and Puerto Rico.

When I ask him what he loves best about his profession of Master Roaster at Winchell Mountain, he doesn’t hesitate. “All of it.” When he graduated from college he landed a good desk job. He met his wife, got married. His dad was getting ready to retire. Will talked to his best friend, Allen Ricca, who was also looking for a new challenge, about taking over the coffee business. They decided to go for it. Allen comes from a family business himself, and he thrives on running the day-to-day operations and passing on his practices and enthusiasm. He also runs a seafood company and a wine importing company. While he enjoys an early morning cup of coffee, for him it’s “all business.” He added, “The product is so darn good that it sells itself and I love being a part of it – and it is great to work with your best friend.”

“I work with my best friend, I get to move around a lot, there’s the constant gratification of the roasts, I employ people.” He pauses. “Life is good.”

Will sent me home with a bag of Louie’s Blend. I’m not a connoisseur of coffee, but I like it very much – though Will winced when I said I add milk to it. “But not flavored creamer,” I assured him. The Louie’s Blend is fantastic. I can’t wait to try some others. And I will never drink another cup of coffee without thinking about the journey of the beans from their perches in high-altitude parts of the world to Pine Plains, NY, where Will works with heat and his hands like his dad before him to craft a coffee that brings uncomplicated but pure pleasure.

Learn more and order some for yourself at Winchell Mountain Roasters’ website, www.winchellmountaincoffee.com 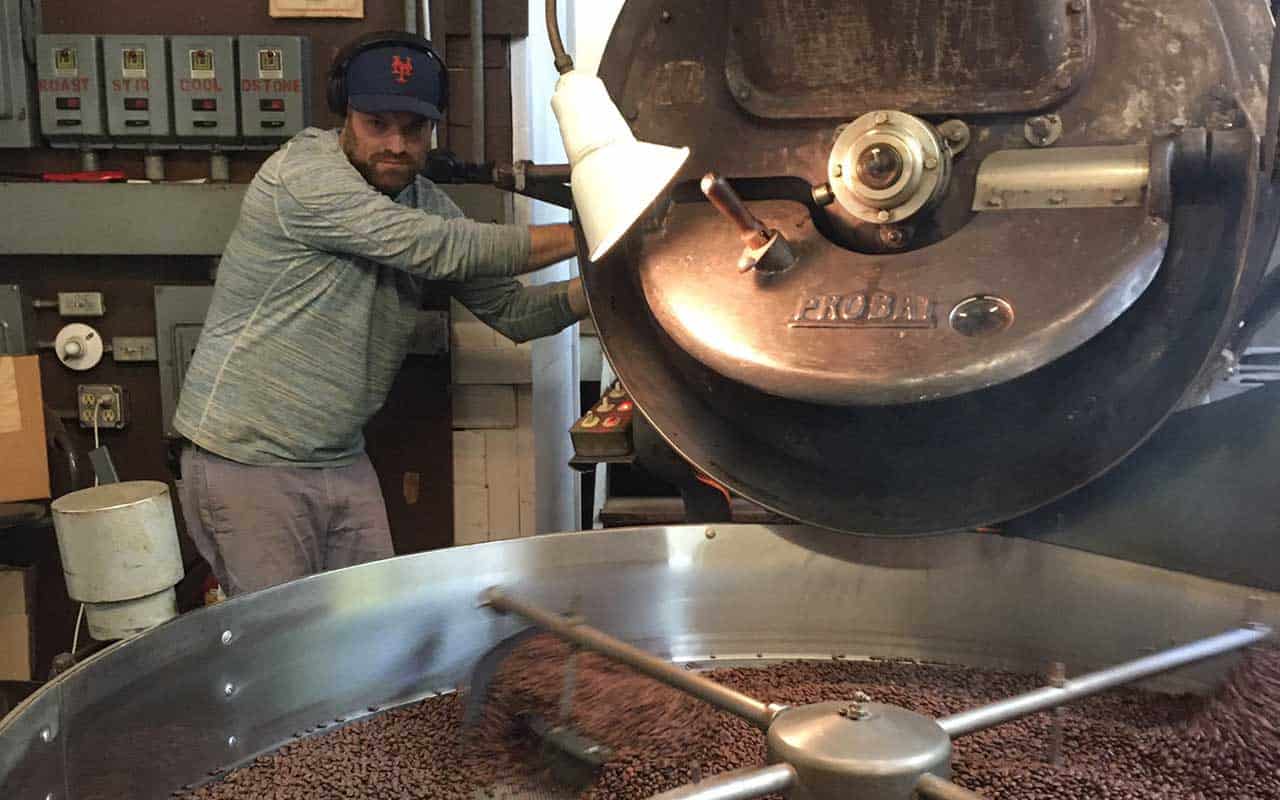