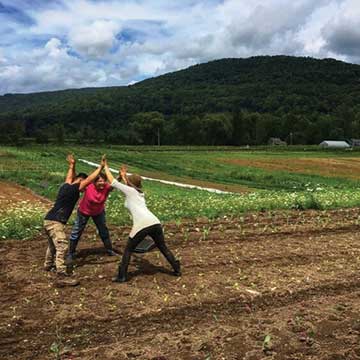 When they started out, D. Rooney, co-owner with Maggie Cheney of Rock Steady Farm on Kaye Road in Millerton, NY, both hoped the Millerton farm could increase food equity in the food system and create safer spaces for LGBTQIA (lesbian, gay, bisexual, transgender, queer/questioning, intersex and asexual/ally queer) and BIOPOC (black, Indigenous and people of color) farmers to thrive.

Almost six years later, the farm, which is located on 12 acres of scenic land, has indeed made a difference. Its wide array of vegetables feed a 450-member sliding scale CSA (Community Supported Agriculture) that includes free and subsidized shares made possible through the Food Access Fund. The farm works in close partnerships with other land-based projects, neighbors, and non-profits that work to build equity in the region and beyond. The farm practices “holistic, regenerative” farming practices.

Yes, the fact that Rock Steady Farm has indeed made a mark in providing organizations quality food for those in need pleases the owners and other members of the farm that work the good earth. But one aspect of the undertaking is the emotional difference it has made in some individuals’ lives.

“I received a letter from a mother in New York City telling me that her child was having issues with depression because of her struggle with identity and a resulting feeling of alienation,” Rooney recounted. “She said when the child learned about us and that we supplied the food to the family, it helped the child come to grips with her feelings, knowing that we are so varied as people and are successful at what we do. I also got a letter from a person in rehab telling us that the food we provided made a difference and was helpful in getting better.”

In other words, Rock Steady Farm brings substance and nourishment to both the stomach and soul. “When we started, that really wasn’t a goal of ours,” added Rooney. “But it made us realize we are making a difference beyond providing good food to those in need.”

Rooney said low-income individuals “deserve to eat the same quality food” that the more fortunate among us have access to. “It’s not just about supplying calories to underprivileged people, which a lot of food pantries and the like have done, but food that is organic and has benefits to health. I think that message is becoming clear for all those in the food supply chain for those in need.”

Rock Steady Farm, which is women- and LCBTQ-owned, basically cuts out the “middleman” in the process of bringing healthy food to end users. The farm offers a sliding scale payment option and the potential to share payments in smaller installments. Individuals can also participate in CSA Work Share, a program that offers limited shares at a deep discount in exchange for 40 hours of work throughout the season in support of the farm, whether it is planting and harvesting or fundraising.

How and where it began

From 2013 to 2015, Rooney worked with friends and peers, Lorrie Clevenger, Jane Hodge, Michaela Hayes, Karen Washington, and Maggie Cheney, and collectively founded Rise and Root Farm. After this, to expand upon her experience growing food in New York City, they decided to move out of the city to dive full-time into large scale farming. Rooney spent the 2015 season working at the five-acre Sisters Hill Farm, in Stanfordville, NY, cultivating large-scale farming skills and a new love for CSA farming. At Sisters Hill, Rooney learned about efficient farm systems, how to drive a tractor and helped to co-manage the farm’s 250-member CSA.

According to the farm’s website, Cheney “grew up growing and loving food.” The child of an organic farmer and founder of The Food Project in Boston, MA, Cheney has been involved with food and farming her whole life. In 2006, she helped start an elementary school garden program in Oakland, CA, and then went on to the University of California Santa Cruz for agroecology and sustainable food systems for two years. After farming a bit in the Hudson Valley, Cheney moved to New York City in 2011, and became the director of farms and education for EcoStation: NY, where she met Rooney and many of the Rock Steady community partners. In 2014, she spent a season farming on Staten Island, NY, at the Snug Harbor Heritage Farm, which “solidified a strong desire to get back to full-time farming.”

Rock Steady Farm also grew flowers for several years but has since abandoned that aspect of its operation after the departure of several key individuals. “It was a decision that was difficult to make,” said Rooney, “but it has also allowed us to use our 12 acres in a more sustainable and agronomically smart fashion. We can now allow four or five acres to regenerate by not planting there for a season and only use about eight acres a year to grow vegetables.”

The farm has enjoyed a boom in the last two years, growing from 275 CSA members in 2018 to the present number of 425. About 57 percent, or approximately 224 shares out of 425 were for low-income folks. Of that 224, 100 were the ‘Solidarity shares,’ which the farm hopes to increase to 180 for 2021. Community Solidarity is an organization that believes food is a right; for all people and assists needy families get such sustenance.

Rock Steady Farm partners with non-profits that sponsor CSA shares so that they are free to low-income families in the area. These shares get picked up from the farm and are distributed to both local food pantries, as well as delivered door-to-door.

Rooney spoke about the farm’s social influence: “Farming has traditionally been male-dominated and can be oppressive for queer and those with complex identities, as well as black, latinos, and bi-racial individuals. We are deepening a farming tradition with those in the LGBTQIA community and persons of color and Indigenous peoples. We get a lot of inquires from queer folks, queer farmers, and from those in rural areas. Things have changed in society but it can still be somewhat dangerous. But when CSA members follow us on Instagram and see non-queer people supporting us and being down with what we are doing, that is a key educational element toward enriching others’ lives and aspirations.”

The farm is undertaking a new webinar outreach program this year, called Food Access Calls. “We have some 220 registered for the calls from all over the country, a really great mix of people curious about how to make something like we are doing work for them as well,” said Rooney.

The farm, said Rooney, is located in an ideal spot. “We are so lucky to have this location in the Hudson Valley area and are only two hours from New York City. We come from the city and many of our CSA partners are located there.” •

To learn more about Rock Steady Farm and all that they have to offer, you can visit their website www.rocksteadyfarm.com, or follow them on social media.