I first met the visual artist Ryan Frank last summer during a show titled Baggage at the Icehouse Project Space in Sharon, CT. The concept of the show stemmed from the great shift of people from their lives in New York City to the Hudson Valley and elsewhere. Baggage featured works by 18 artists who had all uprooted their lives and asked them to examine how that transition of space affected them and their work. Each artist produced a “suitcase” to use as a container to illuminate their experiences.

Frank’s suitcase was made with ash from trees infested with emerald ash borer and cedar from the closet of his old apartment in New York City. The work juxtaposed his two living spaces, the cedar from the interior enclosed urban space of the city and the trees from around Sharon. The sculptural beauty of Frank’s piece was self-evident. What interested me, however, was that the materials were either from something invasive (the emerald ash borer is an invasive Connecticut beetle that kills trees) or from something used to prevent invasion (cedar for a closet to prevent moths). Both spaces, urban and rural, have beauty and challenges.

The idea of space

Frank, who currently resides in Brooklyn, spent seven years living in Sharon where he was the director of The Granary, an art exhibition and storage space for a private collection of contemporary art. He is also a former artist-in-residence at the Wassaic Project. Most recently Frank was the artist-in-residence at The Hotchkiss School where he exhibited an installation titled Cross Cut at the Tremaine Art Gallery.

As a photographer, sculptor, and woodworker, Frank’s work consistently comes back to the idea of space. He states, “Living in New York City, I am invested in the political exigency of space – one of our most valuable resources. Skyrocketing housing prices, international migrant crises, and the advent of climate change have thrust space into a state of uncertain transition, as it is constantly being monetized and weaponized to the detriment of the disenfranchised. My work resists these patterns by considering space’s transformation into place, a specific site that is mapped, felt, moved through and lived by the body.”

Frank often combines mediums as an avenue to explore space. He wants to push his photography beyond the traditional confines of two-dimensional prints and give his images “greater space and light and perspective.” To this end, Frank uses vessels such as boxes, cinder blocks and windows, both handmade and found, to frame his photographs for a uniquely shifted viewing experience. The vessels provide the viewer an opportunity to reflect on the ways space and imagery “collide and speak to one another.”

Space and the body

Frank also connects the idea of space to the human body, in particular through his passion for running. His ongoing project Running Dialogue is a time where Frank and other artists meet and run. During their run the artists talk to Frank about their lives, who they are, the work they do and why they do it. “The project explores how engaging in thought and conversation while in movement allows dialogue to happen more freely, outside the normal constraints of social space.”

During his residency at The Hotchkiss School, Frank encouraged architecture students to interact more deeply with the ecological space of their campus. They each found a wooden object that spoke to them and used it to collaboratively construct an armchair for the installation. Through this interaction between the outdoor space of the campus and the interior space of the gallery, students gained stronger awareness of the interconnection between human beings and their environments.

Frank’s own sculptures for the installation were made from a variety of found and discarded wooden objects from the campus. Each work is distinctive, yet all invite the viewer to contemplate their own relationship to space and how time, erosion and human progress can change and challenge our perception of ourselves and our world. 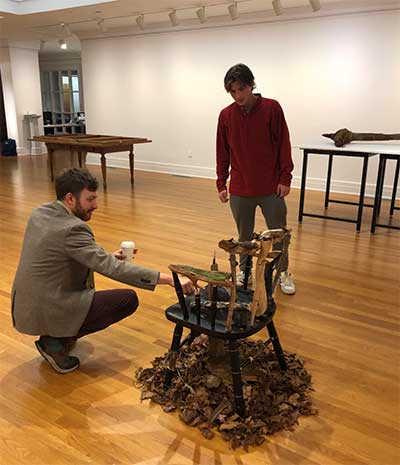 Talking with the artist

I recently had the chance to speak with Frank about his work and how, despite relocating full time back to Brooklyn, he is continually drawn to the Hudson Valley and its environs.

How did art initially become a part of your life?

I grew up doing theater in Sacramento and then studied it in college. One summer during undergrad I was an apprentice at Williamstown Theatre Festival, which was the first time I worked in a wood shop and also created my own original performance work, both of which made a lasting impact. Around the same time I took an art history course at NYU which was eye opening and changed my life forever. Living in New York I started going to museums and galleries regularly, and learned first hand in art spaces in addition to what I learned in the classroom.

Describe how you use art as a way to create awareness.

Some of my earliest works depicted workers and functioned as a kind of monument to labor. My current body of work on view in Cross Cut is the first series I made using wood alone and it speaks to the indirect and environmental impact of human inflicted climate change. Art is a way of saying something that can’t be said with words, through material, object, their placement and context. I think that often art that creates the most cultural and political awareness does so indirectly, prioritizing the exploration of ideas instead of a desired result.

What first brought you to Sharon, Connecticut?

I first came to Sharon for a job managing a private art storage and exhibition space run by a couple of collectors of contemporary art. I was in my late 20s and remember thinking there was no one my age and very little happening in the area, culturally. Shortly after I moved to Sharon I became acquainted with Wassaic Project and was in their first residency cohort in the summer of 2010. Working at Wassaic Project expanded my creative and professional community and over time I got to know many fellow artists based in the area. Sharon now is a lot different from when I first landed there fifteen years ago.

How did your experience living in this area inform your work?

My first summer at Wassaic Project I worked on a series of photo-based animal portraits using barn fencing, milk crates and other rural and industrial materials. After this I created my first extensive body of work which was a series of light boxes made out of plywood that used photographs I shot standing in the middle of rural roads, facing opposite directions. The light boxes were very much influenced by my time living in the area, commuting back and forth from the city, taking in the same expansive views of two lane country roads on a weekly basis. Living up here provided me with the time and space to develop my work in a way I wouldn’t have living back in the city. I’ve always been interested in how place informs what we make and how we make it.

Despite now living in Brooklyn, you often return to this area, what keeps drawing you back?

It’s always nice to get out of the city for fresh air and a change of scenery, but the biggest draw are the fellow artists based here who I consider some of my closest friends. When I moved back to the city full time at the end of 2015, I didn’t expect to return as much as I have, but I’ve continued to exhibit up here with artists I know and admire. I value being a part of the thriving and growing creative community based in the area.

To learn more about Ryan Frank and his work, you can visit his website at www.ryanmfrank.com. 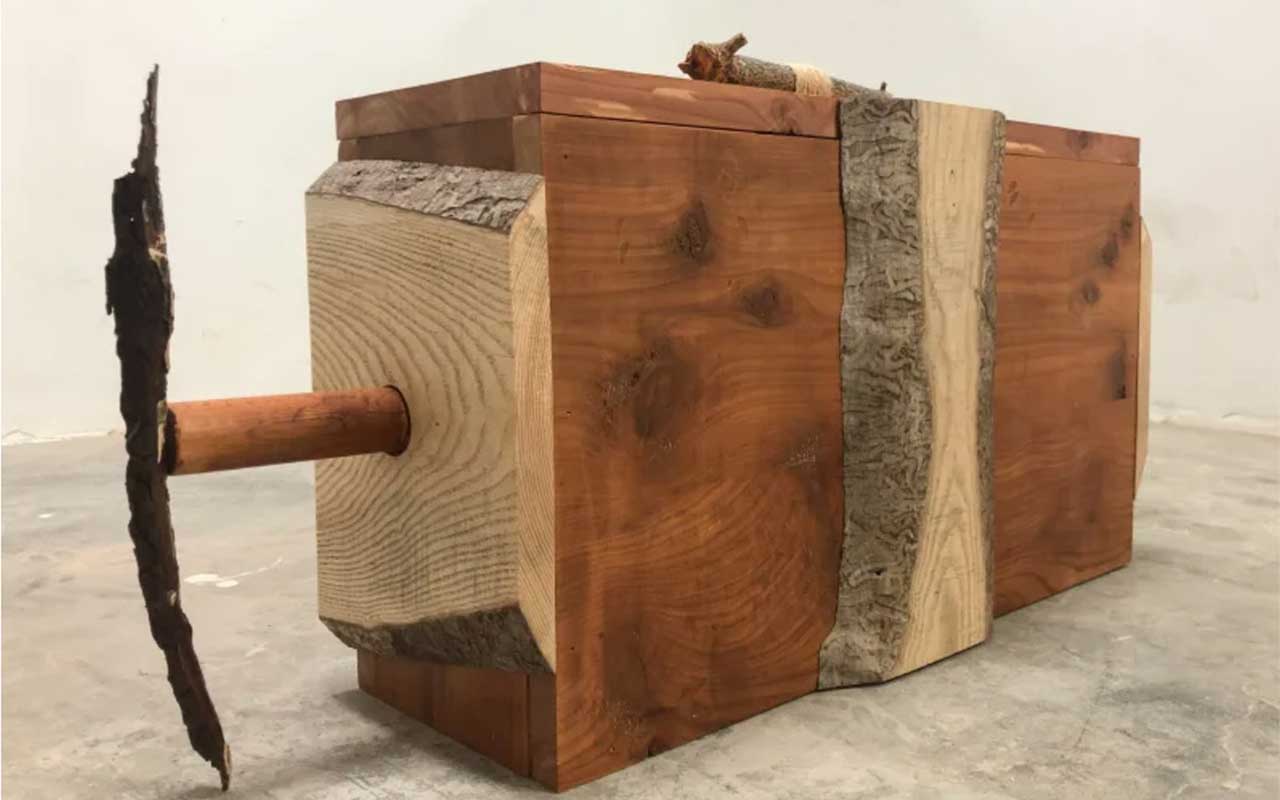