Incorporated in 1971, the Salisbury Volunteer Ambulance Service (SVAS) was founded when a group of Salisbury, CT, citizens realized that an ambulance was needed in town. We spoke with the Chief of Service, Jacquie Rice, to learn more about this organization as it celebrates its 50th year.

Prior to the SVAS, the Sharon Hospital was responsible for ambulance services. This meant it took a little longer for people to get an ambulance, or people were often transported by car to the hospital. What really sparked a discussion about initiating a more distinct ambulance service was a car accident where no one was around to respond. So, as a result of this, with the initiative of W.Rees Harris, a local businessman, in tandem with the help of local doctors, the SVAS began. In the beginning, townspeople learned first aid and focused on what they could do to help. Eventually this level of participation evolved into the team of EMTs, EMRs, and various other important roles that make up the ambulance today.

With 40 volunteers on the roster, the SVAS consists of many different types of volunteers. Some are emergency medical technicians, or EMTs. This is the highest qualification, requiring about 200 hours of education. According to Jacquie, because everyone must juggle so many commitments, these types of volunteers are more difficult to find nowadays. Emergency medical responders, or EMRs, must participate in around 100 hours of education for their roles. The ambulance also has drivers, whose sole responsibility is driving, but these volunteers must learn basic first aid, CPR, and other necessary training. Jacquie notes that drivers are often a great help, whether that be through driving, lifting, or otherwise. Also necessary to the success of the SVAS are the helpers who assist with paperwork and the like, as well as a full Board of Trustees. This board is made up of the townspeople who help fundraise for the service and maintain the ambulance’s status as a volunteer agency.

With this team in place, the SVAS must respond to a vast range of calls. Jacquie notes that though the community aspect of the job can be fulfilling, as it allows volunteers to help their neighbors and friends, it can also be saddening to see someone you know in these situations: “A lot of times you’ll know the people who are in trouble or who have died.” She explains, too, that though some calls may be very easy and quick to deal with, others can take hours to resolve.

With the variety of situations to be had, especially in an area with mountains, bodies of water, and more, Jacquie underscores the fact that regardless of the amount of time it takes, the service recognizes that each of them must do as much as possible, and really give their all, for

those in need of help: “You just do what you need to do, and then you can do whatever you need to do afterwards, and kind of reflect back. Because you always know you’ve done whatever you could do to help save somebody, and sometimes it works, and sometimes it doesn’t. We talk about that a lot within our squad, too. You know, ‘You did the best you could. And the outcome wasn’t what you wanted it to be, but you did the best you could.’”

On top of these sorts of calls, with the onset of the pandemic, the ambulance service had to adapt to this new situation in critical ways. “Understanding what PPE, what equipment to wear. Nobody really knew what to wear. Of course, we didn’t normally wear N95 masks, so we didn’t have this huge supply of N95 masks. We had plenty of gloves, and plenty of regular surgical masks, and all that kind of stuff, but we really didn’t have that kind of mask,” Jacquie explains.

C A Lindell & Son in North Canaan and Herrington’s were both pivotal in helping the service by supplying N95 masks, with the state later giving out the necessary equipment. Jacquie reflects that the ambulance was never truly lacking in anything that they needed, since they were proactive in investigating the right materials and finding out ways to access them. She notes, too, the many types of support the townspeople have offered: “The people of the town of Salisbury are incredibly generous. We need a new ambulance, and we get enough money to buy a new ambulance. People were dropping off masks, and gloves, all kinds of stuff during the pandemic.”

In terms of the virus’ conditions, the squad has seen other changes, too. In the earlier days, many of the volunteers had to decide whether they could continue being responders in a situation full of unknowns. This is especially true considering all of the other commitments these volunteers always have to balance, and about half of these people determined that they needed to step back from their roles. “It was a really difficult choice at the beginning to continue being EMS,” Jacquie points out. 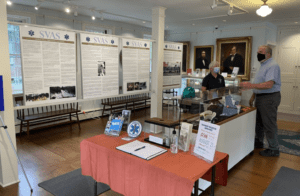 In the beginning there were also far fewer calls, as many were reluctant to reach out to the ambulance or go to the hospital because the virus was still very new. However, the ambulance squad stressed at that time that hospitals were taking precautions, just as they are now, and it has always been the top priority to get patients the treatment they need. Fortunately, the SVAS has only transported a few COVID patients, and Jacquie observes that in earlier days of the pandemic, many people in the Northwest Corner were doing what they were supposed to do. Because of this, there was not a complete overrun of people in the area’s hospital and facilities.

Fortunately, many volunteers have now returned to the service if they did decide to take a break. The SVAS still must wear masks on calls, and this is especially important considering current vaccination rates and an overall rise in cases. In July, the ambulance received 55 calls, and the increase in population as city residents have visited or moved here for the summer has certainly contributed to this number. Jacquie emphasizes the sporadic schedule that all ambulances must deal with on top of this specific population increase: “We won’t have a call for a couple of days, and then we’ll have five calls on one day, just going back and forth like a revolving door at the hospital.”

Because of the uncertainty, responsibilities, and various demands of volunteering in this field, Jacquie underscores the importance of the entire team, and makes very clear that each member of the service is critical to the success of the squad as a whole: “Our ambulance [squad] especially is very multi-talented, because we have all the lakes, and all the Appalachian trail comes through, and our topography and geography is such that [it requires these skills]—and that’s true for all of the towns in the Northwest Corner. You have to have a lot of talented folks that can propel down the Falls and make a swimming rescue or make a boating rescue or hike a mountain. That’s why we really appreciate everyone’s input and help on the ambulance squad, because everyone’s so talented in different ways.” She emphasizes, “We’re all a huge, big family now. You have your regular family and you have your big family at the Salisbury Ambulance, too!”

To celebrate their momentous 50th anniversary, the SVAS is holding an open house on Saturday, August 21st from 11am-3pm at Trotta Field in Salisbury, CT. All the ambulances, rescue trucks, and the trailer they use will be on display. Other responders in the community, like police officers, members of the fire department, and nurses will also be in attendance. Join the SVAS in celebrating their hard work and dedication!