This is a beautiful part of the country, it really is. At least once a week, a certain slant of light or the fleeting glimpse of a fox reminds me how lucky we are to live amidst such natural wonders.

This year, that fifth month of winter nudged me toward a madness that inspired the writers of Groundhog’s Day. Go north, more winter. A little south, more mud and rain. To escape it in April, one must go big or stay home.

One gray morning, this dilemma brought me to Expedia with one question (with apologies to Mary Oliver): what will you do with this one wild and precious week?

The opposite of here

One of the best ways to understand any concept is by comparing and contrasting it to its opposite, which led me to my next question: within the continental United States, if I could go to a place most unlike this one, where would that be? And once I was there, what would I do that is most unlike my normal routine?

Florida immediately comes to mind, as does anywhere south of, say, Tennessee. But the term “snowbird” was created to describe the flocks of people who head to those places in the winter. My thoughts drifted west: New Orleans…Texas…Arizona.

I viewed Las Vegas as a staging area with cheap hotel rooms and amusing spectacles – a gateway to the Utah desert, where I decided to plan three days of backpacking in Zion National Park. Not only had I never been to Zion, but I had never backpacked in a desert environment.

My years of Boy Scouting have ingrained the motto “Be Prepared” into my approach to backpacking, so while I aim for the lightest possible pack, I also try to account for every contingency in my selection of gear. Backpacking in the Northeast demands consideration of everything from snow to black flies, and as I researched backpacking routes in Zion, I learned that it can have equally mercurial weather. In April, the desert can be hot, cold, or both, depending on the time of day. It can be dry and lacking in water sources as well as prone to flash floods.

I settled on a little bit of everything: rain gear and puffy jacket; shorts and wool base layers; sunscreen and down sleeping bag.

I ended up using all of it.

While I was prepared for the wilderness of Zion, I was less prepared for the wildness of Las Vegas. Flying into it at night, I expected to see the spectacle of the Las Vegas strip from above, but when the person in the window seat decided to keep their shade drawn, I was literally blinded to it until I turned my rental car onto Las Vegas Boulevard and saw the Eiffel Tower looming overhead. Over the next ten hours, I would stroll through a Parisian streetscape, past the Arc de Triomphe, and have breakfast at Eggslut. C’est la vie in Las Vegas.

Whatever the opposite of sleepy Falls Village, CT is, Las Vegas must be pretty close to it.

The next morning, I set out for Zion along the long, straight ribbon of Interstate 15 that constitutes a different kind of contrast from New England. No trees, no bends in the road, just flat out flying at 80 miles an hour for three hours. Mesas and telephone poles flashed by like Morse code, and before I knew it, I was in another time zone, checking out at the local outfitters in Springdale, Utah, with a propane canister, detailed park maps, and a Nalgene water bottle to replace the one that was lost in airline baggage.

My first night out was to be a trial run: a four-mile out-and-back along the Coalpits Wash Trail into what I thought would be a quieter part of the park called the Southwest Desert section. I loaded up with water and took my first sandy steps amid the sagebrush, mesquite, and pinion pines. I was the only one on the trail, and by the looks of it, I was the only one who’d been there for days.

Fortunately, someone on horseback had come through recently, and whenever the trail crisscrossed the dry riverbed, hoof marks marked the trail on the other side. Unlike the Appalachian Trail’s unmistakable white blazes, hoof marks were all I had to go by as the trail moseyed along the banks of the wash, threading its way between sparse vegetation and volcanic rock formations.

But the area was not lifeless by any means. Crickets sprang underfoot, cottonwoods shaded the few remaining mud pools, and a single, explosive desert evening primrose festooned the talus.

Maybe it was just me, or maybe it was the suggestion at the trailhead that mountain lions have been seen in the park, but during my day and night in the Southwest Desert, I had a continual sense of activity just out of sight. Coyote tracks and chipmunks were the only evidence of wildlife until I settled into camp and sat down on a nearby precipice to take in the sunset. As the wind died down and insects began to buzz, a chorus of unseen birds serenaded the sunset like a cowboy with a harmonica, and one by one, a needlepoint of brilliant stars perforated the tapestry of the night sky. I left the rain fly off the tent to be a little closer to it while I slept.

The next morning, I awoke before sunrise out of necessity: I had booked a spot on the 9:30am hiker shuttle to the Lava Point trailhead of the West Rim Trail, and I had to hike four miles to get to the van. Lava Point marked the beginning of my planned traverse through the center of the park along the West Rim of Zion Canyon. I would hike the better part of nine miles along the rim before descending into the heart of the park along the spectacular slickrock trails that the Civilian Conservation Corps built into the canyon walls in the 1930s.

After the hour-long shuttle, I found myself alone once again in front of the panorama of Lava Point before hiking down to 6000’, where most of this trail lies. From time to time, I would pass a small group of backpackers, but for the better part of five hours, I hiked within view of the tiramisu of Zion’s upper canyon, pausing here and there under pinion pines to appreciate the barren afternoon light of the American Southwest.

I first saw that light through a View Master when I was eight. I had inherited a set of National Park discs with lightly worn edges that gave me my first glimpse of western sun in iconic images of Mount Rushmore and Glacier National Park, framed by the solemn darkness of the View Master. I was intoxicated by the quality of the light, and it has since come to signify the western United States for me.

I spent most of that day awash in that perfect light, but toward sunset, clouds began to shade the opposing wall of Zion Canyon. By the next morning, gusty winds had blown in a tumult of roiling gray, and the forecast predicted rain by noon. As I started down the slickrock of the canyon, though, I was glad for the flat light and protection from the sun on the now treeless path. My campsite at Cabin Springs marked the end point for day hikers who would explore the upper reaches of the canyon and the spectacular geology of the park, and the trail here was maintained for crowds, with easy grades and flat surfaces. 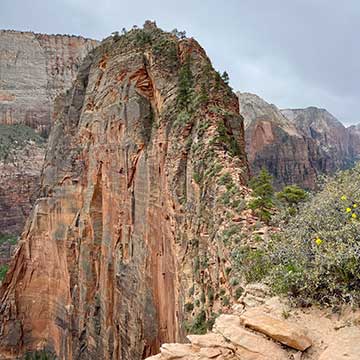 The main attraction on this part of the trail is Angels Landing, a knife’s edge of a butte that stands almost fifteen hundred feet above the Virgin River that snakes around its base. Chains provide an extra point of contact and a focal point to keep hikers from peering over the harrowing edge, but enough Instagramers have documented themselves at its panoramic summit that park officials have installed a permit system this year to limit the crowds. Backpackers like me with a backcountry permit are allowed to summit, but they must carry their packs with them up the considerable incline.

The Beehive Trail in Acadia shares some similarities with this hike, but the additional thousand feet of cliff add a degree of anxiety to Angels Landing that has few analogues in the eastern US. Fortunately, the volcanic rock that comprises most of the trail provides unparalleled purchase, and within an hour, I, too, would claim my social media moment, with the southern reaches of the canyon at my back and an increasingly ominous sky overhead.

Rain freckled the trail as I descended into the center of the park, and I paused to extract my rain jacket and pack cover for the last few miles, satisfied that I had used every piece of gear I had packed. I left The Narrows and The Subway, Zion’s famous slot canyons, for another trip, but in three days, I had bonded with a place so distinct, so wonderfully different from Southern New England that I felt no need to visit those overcrowded attractions. Perhaps next March… 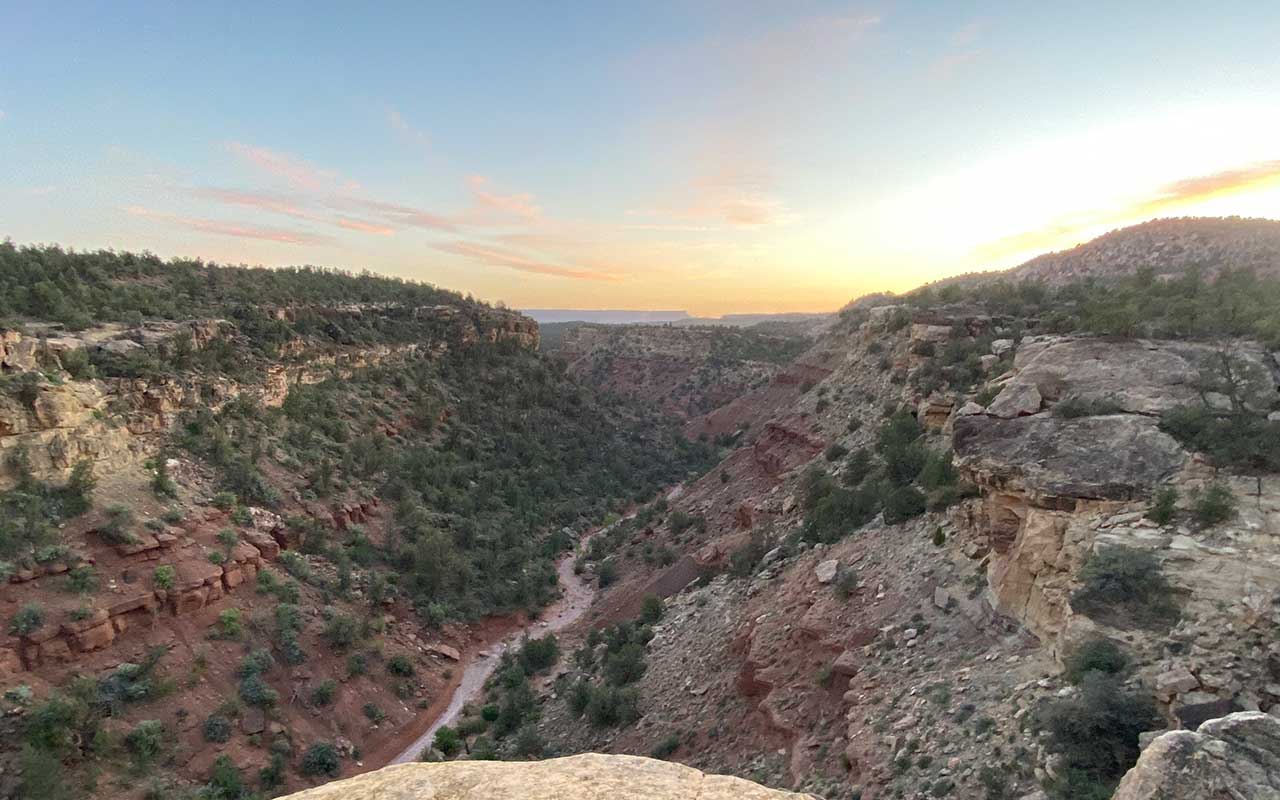