The Bridges of the New York State Bridge Authority 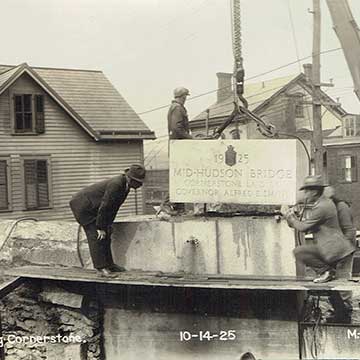 As most of us believe, we study history to determine how we arrived at where we are, and to help us determine what is working and what needs to change. The Bridge Authority has historically provided an invaluable, but mostly unrecognized contribution to the Hudson Valley and New York State.

The New York State Bridge Authority was created at the suggestion of then-Governor Franklin D. Roosevelt, through an act of legislation in 1932, to fund, operate, and maintain the Rip Van Winkle Bridge. The Bridge Authority consisted of three commissioners, or board members, appointed by the Governor: Clifford L. Miller of Claverack, Chairman (seated center in the photo above, right); Robert Hoe of Poughkeepsie (left), and Addison P. Jones of Catskill (right) to carry out the Bridge Authority’s work.

In 1933, the Bridge Authority purchased the Mid-Hudson Bridge from New York State, which became the first bridge the Authority would operate and maintain. The Mid-Hudson Bridge was opened in 1930. The iconic suspension bridge was designed by Ralph Modjeski, the founding partner of Modjeski and Masters, Inc. which has been General Consultant for the Authority for many years. The cornerstone for the bridge was laid by then-Governor Al Smith in 1925 (see photo below), and celebrated by thousands in Poughkeepsie, as it culminated a long fought community effort to build a bridge in that location to transport produce from the many farms west of the Hudson to the markets, including the newly opened Bronx market, on the east side of the river.

Most people are unaware that construction of the Mid-Hudson Bridge was almost abandoned due to a near catastrophic tip of the east tower caisson while it was being sunk to the uneven bottom of the Hudson River (see photo right). Early in the morning of July 27, 1928, the caisson listed to an angle of 42.5 degrees in less than a minute, causing the east edge to drop 29 feet and the west edge to rise 11 feet. What occurred then was referred to as a Herculean effort to right the caisson, through over a year maintaining force on the caisson, in the currents of the Hudson caused by tidal flow and the southward movement of the river, even in the ice of the winter. Finally the caisson was righted.

The final block was placed on the base of the tower in a ceremony on May 22, 1929, and the work on the bridge continued, with its opening on August 25, 1930. An independent engineering report, filed after the bridge was completed, found no issue with the design, and determined the contractor had caused the tip by applying the fill unevenly in the separate compartments of the caisson.

Tolls on the Mid-Hudson Bridge were very high. One of the first things the new Bridge Authority did was to petition New York State to lower the tolls. The State was opposed to that idea, but once the Rip Van Winkle opened, the Bridge Authority successfully lowered tolls on both the Mid-Hudson and Rip Van Winkle Bridges from $0.80 per car, with an additional $0.10 per passenger, to $0.50 total per car. Tolls would again be lowered in 1942 to $0.35, and in 1945 to $0.25 to help those struggling to make ends meet during and after World War II,

EZ-pass came to the Bridge Authority bridges in 1997, providing an additional discount to the tolls. Although people often question why the tolls are still on the bridges after the original bridge cost was paid, the relatively low toll compared to other long span bridges in the United States is a small price to pay to have some of the best maintained bridges in the country. The toll is charged in only one direction and, with EZ-pass, costs less than a cup of coffee many people pick up before beginning their morning drive.

Designed by Glenn B. Woodruff, the 5,041-foot-long cantilever underdeck truss structure had an 800-foot-long suspended through-truss section over the main channel of the river. Built during the Great Depression, the Bridge Authority insisted on the use of local labor. A brief strike during construction was resolved by allowing workers to work additional hours. Previous to the strike, workers received $1 per hour for a 30-hour week.

The Rip Van Winkle Bridge opened on July 2, 1935. Parades, celebrations, and speeches in Catskill and Hudson culminated with ribbon cuttings on both ends of the bridge (see photo directly right). The newly completed administration building would be the new offices of the Bridge Authority, previously located in the Worth Hotel in Hudson. On top of the building is a weather vane hosting Rip Van Winkle himself, which still sits atop the building today.

Built using Roebling cables, the bridge differed from future Hudson River crossings in that both towers were located on the shoreline. That design required only the main span between the towers to be suspended from the main cables. As soon as the Bridge Authority took possession of the bridge, the tolls were lowered to the same as their other two crossings. This iconic structure will celebrate its centennial in 2024, due primarily to the careful and considerable maintenance of the Bridge Authority.

With the success of the three bridges of the Bridge Authority, other communities petitioned to get a bridge in their areas. Residents in Newburgh and in Kingston both sent delegations to Albany to request a bridge be built for their use. With the new interstate system being developed, Kingston was granted the first build. The intent was that the Kingston-Rhinecliff Bridge (see all photos on this page), moved a bit north from the originally planned location at the mouth of the Rondout Creek, would connect the Taconic State Parkway with the new New York State Thruway.

Designed by eminent bridge engineer, David B. Steinman, the Kingston-Rhinecliff was originally designed to be a suspension bridge. Moving the bridge three miles north would necessitate a different design. The Kingston-Rhinecliff Bridge became a continuous underdeck truss bridge with a main and secondary channel. The bridge is 7,793 feet long, offering incredible views of the Hudson River and the Catskill Mountains.

With some minor construction still to be completed, the bridge was opened on February 2, 1957 to allow commuters access, since the river was frozen, the ferry couldn’t run, and many workers needed to get to the IBM facility in Kingston. A formal dedication of the bridge occurred on May 11, 1957, by Governor Harriman, who had been instrumental, along with his family, in building the Bear Mountain Bridge.

With the completion of the Kingston-Rhinecliff Bridge, Newburgh and Beacon were anxious to get their bridge built. Then-Governor Rockefeller was reluctant to take any money from the federal government to pay for the bridge, so what’s now the north span was built a bit smaller than was thought to be needed, as a two-lane bridge with only one lane in each direction.

Bethlehem Steel Corporation fabricated 14,920 tons of steel for the bridge’s superstructure. The steel was shipped by rail to New Jersey, then by barge to the construction site. A cantilever underdeck truss bridge with a through-truss cantilevered over the main channel, the first Newburgh-Beacon Bridge (see all photos on next page) would be 7,855 feet long when it opened November 2, 1963. It was an award-winning design, determined by the American Institute of Steel Construction to be one of the most beautiful steel bridges of 1963-64.

It quickly became evident the Newburgh-Beacon Bridge was not sufficient for the 25,000 cars, on average, that crossed it every day. With the completion of Interstate Route 84, the bridge had become the biggest bottleneck on the river. In October 1975, the Federal Highway Administration gave approval to design and construct a parallel Newburgh-Beacon Bridge and more important, by special legislation of Congress, the Bridge Authority was give special authority to collect tolls on the interstate highway bridge for the expressed purpose of paying for bridge maintenance. The new bridge was designed by Modjeski & Masters, of similar design, but was four lanes wide.

Between the building of the north span and the south span, many changes had evolved in bridge construction. While a good portion of the bridge was built in place, several of the truss sections were built in an assembly yard, specifically constructed for that purpose, on the west shore of the Hudson River just south of the bridge site, in New Windsor. Once assembled, the large sections of the bridge would be floated upriver on barges and hoisted into place.

Four deck trusses and two anchor spans were floated upriver and installed on the bridge for a total of 442 feet of the bridge length. Once the bridge work was complete the assembly yard was dismantled.

The last section of the steel structure was put in place on August 20, 1980, with a crowd forming at the Newburgh waterfront to mark the historic event. In a little more than two months the bridge would be completed and opened on November 1, 1980, just a day less than 17 years after the first span opened.

Almost immediately after the new span opened, the north span was closed to widen it from two lanes to three lanes. Abutments were rebuilt, expansion bearings were rehabilitated, old steel was removed and additional steel was added and reinforced to carry the widened structure. The bridge received a complete new deck and the steel was repainted to match the brown of the Corten steel of the south span.

The safest and most beautiful

The New York State Bridge Authority has continued its record of excellent maintenance of all their bridges, most recently working to complete its largest capital project in its history, the re-decking of the north span. The project is currently ahead of schedule. With its completion the Interstate 84 corridor will have seamless crossing over the Hudson River, thanks to the implementation of cashless tolling.

The Bridge Authority bridges, all with the same low toll, separated from each other by a mere 30 minute drive, have ensured safe, affordable, and convenient crossings of the Hudson River for all. The mantra of the Authority’s Engineering and Maintenance Department, “maintenance deferred, is maintenance denied,” assures the Hudson Valley and all who travel through this area, will be crossing the Hudson River on some of the safest and most beautiful bridges in the country.

To learn more about the New York State Bridge Authority and its bridges, please visit www.nysba.ny.gov. “Images of America: Bridges of the Mid-Hudson Valley,” by Kathryn W. Burke provides more than 220 archival photos and more history on the bridges of the NYS Bridge Authority. 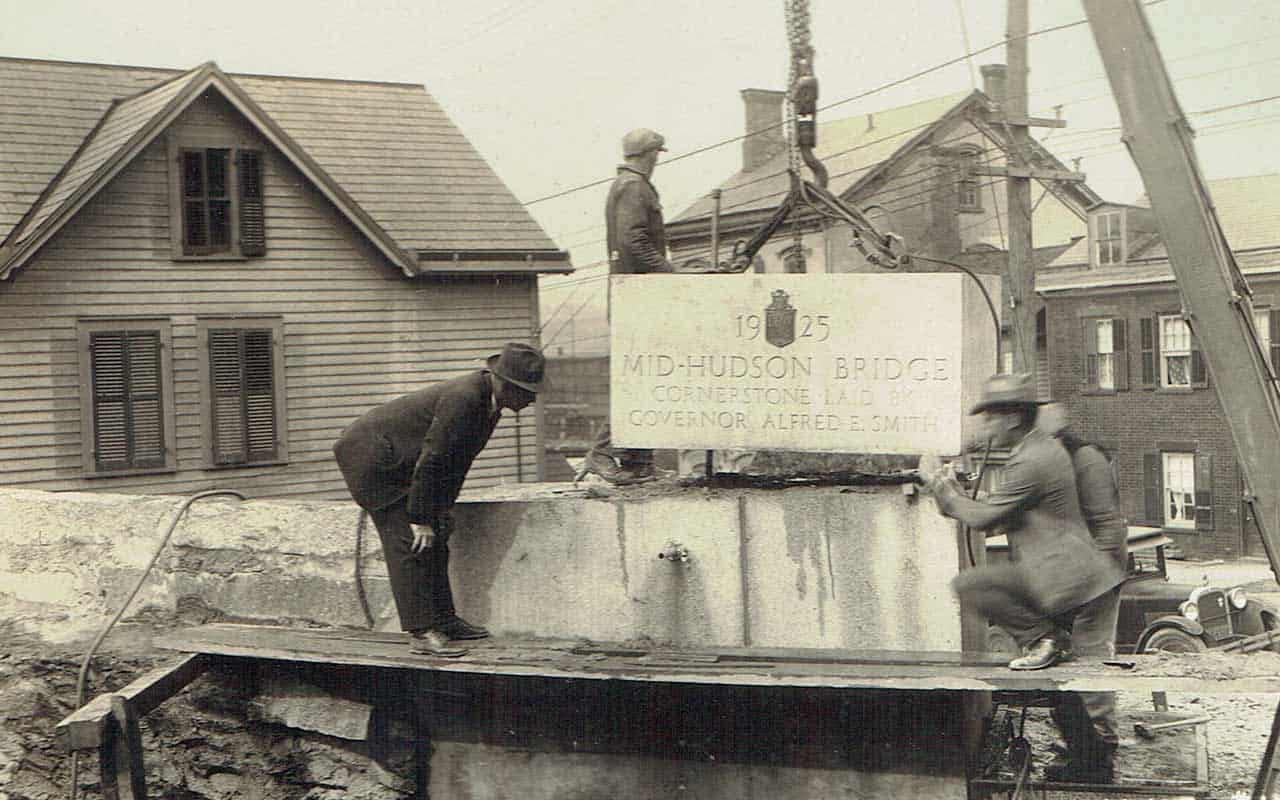