THE HILLS ARE ALIVE 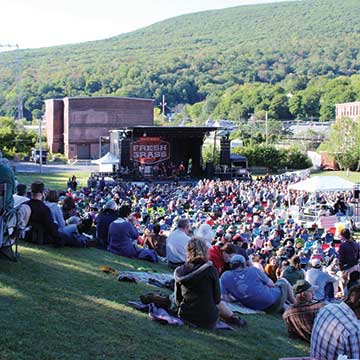 Odds are, you are probably related to someone like my brother. Given the choice between buying groceries and buying tickets to see the band Phish, he’ll bum a hot pretzel off the guy next to him at the concert. At this point, he’s seen them over eighty times, including consecutive shows at Madison Square Garden leading up to the past five New Year’s Eves.

Awhile back, I asked him why he was so devoted to the band, and he described it in almost religious terms: the transcendent feeling of 20,000 people simultaneously enthralled by music.

Live music has a unique ability to move an audience in ways that recordings never will, and wherever there is a community, there will be musical gatherings that bring everyone together in joyous celebration.

Our hills are no different, and while The Rolling Stones aren’t likely to swing by on their worldwide tour, audiophiles can access plenty of performances in intimate venues that are destinations in and of themselves.

The first to come to mind, of course, is Tanglewood, where, coincidentally, Phish’s lead singer, Trey Anastasio, will headline the 2020 Popular Artist series along with household names like Ringo Starr and Arlo Guthrie. The wine-and-cheese set will be familiar with the iconic lawn at Tanglewood, but their 2019 addition of a four-building Tanglewood Learning Institute extends their offerings through all four seasons, covering a range of visual and performing artists. That’s great and all, but listening to the Boston Symphony Orchestra outdoors on a perfect summer day is still the quintessential Berkshires experience.

But I’m sure you already knew about Tanglewood. So where else can you catch a show without going to a major city? Think of local theaters. In Great Barrington, MA, the Mahaiwe Theater hosts 90s mainstays The Gin Blossoms this March, offering concertgoers a unique opportunity to experience the glamor of this magnificent theater that celebrates its 115th anniversary this year.

Architects back then knew what they were doing: the Mahaiwe’s “use of electricity, sophisticated heating and ventilation systems and superb configuration made it a first-class performing hall almost one hundred years ago,” explained the late Hugh Hardy, who restored the theater to its former glory in 2006.

Another glorious theater, the Colonial in Pittsfield, MA, hosts guitar prodigy Quinn Sullivan this March when he headlines the Blues & Brews Festival on the 21st. The 20 year-old wunderkind has performed with blues legends Buddy Guy and B.B. King, and The Washington Post has said Sullivan “may be the most gifted guitar prodigy on the planet, a blues player of jaw dropping virtuosity and depth who could turn out to be the Clapton of his generation.” That’s incredibly high praise, worthy of checking out with a mug full of local craft beer in a charming locale like the Colonial.

Similarly, Infinity Hall in Norfolk, CT, will charm you, no matter what style of music you go there to hear. It is the definition of intimate, with wood flooring and bistro seating, and you can almost hear the operatic strains that issued from its proscenium stage when it opened in 1883. Nowadays, cover bands for Neil Young, Clapton, the Eagles, and the Doors comprise their calendar, but for my money the eclectic Tex-Mex band Los Lobos offers incredible musicianship, covering a range of styles from boleros to zydecos. Check them out on February 21, along with Infinity Hall which is a destination in and of itself.

If you miss Los Lobos, however, you can always return to Norfolk, CT, in the summer for its Chamber Music Festival, performed by the Yale School of Music. This venerable institution embodies the rich tradition of music in the Litchfield hills, stretching back to the Battell family’s efforts to bring world-class performances to what was once a layover between Albany and Hartford. The Music Shed built on the estate can accommodate 1,200 listeners, and since the passing of Ellen Battell Stoeckel in 1939, the Yale School of Music has honored her bequest to extend the “University’s courses in music, art, and literature” to the public. Current director Melvin Chen will soon announce the slate of performances that will celebrate the 125th anniversary of the school this season.

For those with an interest in world music, Sat Nam Fest on Lenox, MA’s, Eastover estate brings sacred chanting in the Kundalini Yoga tradition for four days of joyous celebration on their scenic grounds. As anyone who knows Kundalini Yoga might expect, this is an immersive experience that incorporates activities for the mind, body, and soul that promise to leave participants rejuvenated and energized. Like most festivals, lodging is recommended, and Eastover provides impeccable accommodations that help to bring the Kundalini community together when the music ends.

The prototypical music festival venue, however, is MassMoCA, host to the biennial Solid Sound Festival (on hiatus in 2020) and Fresh Grass, a celebration of all things bluegrass. Few locations can pivot so deftly from regular business to host thousands of concertgoers for several days, but the influence of industry rock legends such as Wilco helps transform North Adams, MA, into a modern Woodstock featuring a range of indie rock heavyweights. Like most festivals, organizers have diversified the event beyond music to include comedians such as Tig Notaro and excellent author talks with the likes of Cheryl Strayed and John Hodgman. In addition to the perennial draw of Wilco, big names such as Courtney Barnett, Neko Case, Kurt Vile, and Real Estate guarantee good value for the $189 ticket prices. Look for it to return in 2021 for its seventh edition based on Jeff Tweedy’s characteristically aloof commitment: “Barring some unforeseen problems, I don’t see why not. I think that’s the plan.”

Rock stars are so cool.

The performers at the Fresh Grass Festival lean toward folk music, but household names like Allison Krauss and Old Crow Medicine Show anchor a slate of bluegrass artists that will keep your toes tapping for three straight days. For the first time ever, organizers are offering a chance for real devotees to get a head start at Fresh Grass Bentonville in Arkansas in late April, but the North Adams, MA, event is the epicenter of the Fresh Grass Foundation’s work. Although (as of the writing of this article) they have not yet released the schedule of events, the roster of big names over the years is proof enough to clear your calendar for September 25-27.

At first glance, the Main Street area wouldn’t appear to be a major crossroads for music tours, tucked between larger cities and lacking major indoor venues. Take a second look, however, and a host of intimate concert halls and varied musical offerings reveal the rich musical heritage of our area. For over a century now, our hills have been alive with the sound of music, bringing us together as a community through the magic of melody. To not join in at some point it to miss out on not only a cultural experience, but an experience of our local culture, too.