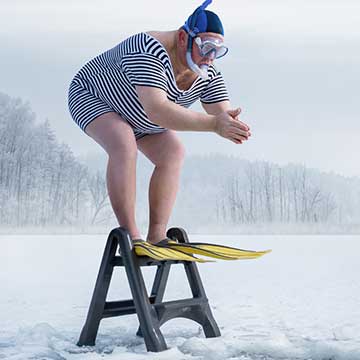 In most publications, this is the part of the article that usually includes a disclaimer meant to either dissuade the reader from engaging in the about-to-be-described activities or at least distancing the writer or publication from any kind of liability for the reader’s suggestibility and – let’s call a spade a spade – stupidity. Whether the editor will insist on more robust and legal-sounding language remains to be seen, but the author feels duty-bound to go out of his way to discourage most people from the following activities, at least until an M.D. signs off.

For the sake of preservation, I will withhold the name and location of my favorite swimming hole in the area, but regardless of the season, its pools are always limpid, deep, and cool, made all the more refreshing by their cloistering in a shaded ravine that cleaves a prominent ridgeline. Even on the most oppressive summer day, immersion in them requires monkish exercises in repressing the urge to shriek like a schoolgirl as the waters approach ones reproductive organs, but on this, the first day of November, I was hoping that the temperature would somehow push beyond my brain’s ability to sense the cold, like an hors catégorie climb in the Tour de France. Beyond categorization cold.

I was about to go swimming. Outdoors. In November.

Or really, submerging. It was a potentially dumb idea that germinated four months earlier on a trip to California when, with no good way to work out, I adopted breathwork exercises as a surrogate. Using the Breathwrk app, I shifted my default rhythmic breathing patterns by practicing, variously, diaphragmatic breathing, alternate-nostril and exclusively nasal breathing, holotropic breathing practices, and breath holding. These, along with a copy of James Nestor’s bestseller Breath, would constitute my initiation into the world of breathwork that would ultimately lead me to an icy mid-November dip in a mountain stream.

Breathe less, and breath through your nose

Nestor’s book documents his personal exploration of breathwork as a strategy for addressing his own pulmonary ailments, and he investigates practices from around the world and throughout time that expand his repertoire of respiration. His quest sends him to ancient yogic practices and Navy SEAL training, gum-chewing, mouth taping, and “nose songs,” ultimately landing on some simple conclusions: breathe less, and breathe through your nose.

So, sitting poolside in Millbrae, CA, I pulled up the app and followed the guidance of the voice that exhorted me with the enthusiasm of an aerobics instructor to breathe into my belly, extend through the chest, then release to exhale, for thirty or forty repetitions. At the end of this modest hyperventilation, I released almost all of the air in my lungs and held my breath for as long as possible.

Or really, I just held still.

The rounds of belly-chest breathing had supercharged my cells with oxygen in a palpable way, and when I exhaled, I could remain breathless for about a minute in a profound meditative state that was heightened by the lack of breathing. Nothing was moving, allowing me to focus on the most subtle sensations. I felt a tingling in my extremities that I attributed to the oxygenation, and I sensed energies shifting around my body. It began with the compulsion to breathe again that surged from my belly to my shoulders. Shifting this downward, I noticed tension in other parts of my body, and I focused on assigning attention to each one. For that minute, I was as present in my body as possible.

I kept up the breathing regime for the rest of the week and extended it into other parts of the day. It wasn’t hard. Moments seemed to find me when I needed to take a long, slow breath, and so I did. The app had other brief exercises to shift my mid-day breathing patterns, and as I tested them out, they became part of my repertoire. Some involved holding my breath, some involved extended exhalation. In general, it all led to slower respiratory rates.

I was wearing an Oura, a digital fitness tracking ring that monitors a number of vital signs including heart rate, respiratory rate, body temperature, and heart rate variability. Over the course of the next month, I was training for one last event of the season, and as the intensity of my workouts increased and my breathwork migrated into my exercises, my respiratory rate slowed moderately, my body temperature consistently registered lower than my average, my sleep was more consistent, and remarkably, my heart rate variability increased with the predictability of a mountain slope, each week’s average slightly higher than the previous one.

This was not completely scientific, as there were several variables in play, but it was proof that for me, at least, the breathwork certainly wasn’t hurting. I began to dabble in some of the other strategies in Nestor’s work: I bought a box of jaw-strengthening Falim gum and began shifting to a nose-mouth pattern during aerobic exercise that kept my sinuses clearer and my respiration slower.

The same name recurred in everything I read, however: Wim Hof. After the fourth or fifth mention, I decided to hit up Wikipedia and soon after, buy his book, The Wim Hof Method. Frankly, it’s the kind of book that could have been written in thirty pages, or maybe thirty words, so here goes: practice his breathing technique, immerse yourself in the cold, and harness the power of your mind to do more than you thought possible. (Twenty-three, if you’re keeping score).

Breathing? Check. But cold immersion? That’s new. I’d been curious about ice baths and cryotherapy but largely written them off as fitness fads of the beautiful and famous. That’s where Hof’s book is helpful. He provides accessible entry points to the power of the cold, starting with a fifteen-second shower at the end of the typical warm shower, and with zealot-like gusto (“It’s amazing!”), he exhorts readers to take that first small step to turn off the hot water (“You have to take a shower anyway, right? So it’s very simple. Just end up cold”).

The benefits to the vascular and limbic systems, Hof claims, warrant the two minutes of exposure to the cold, and there is scientific support for his thesis, at least in his own body, which has been tested in several lab situations and during bare-chested climbs on Mt. Everest and swims beyond the Arctic Circle. But still, I was skeptical.

True to his word, though, after two weeks, I had built up a relative immunity to the cold showers that originated in the limbic system – that old fight-flight-freeze mechanism in the reptilian brain. Yes, the shock of cold hit me as soon as I turned down the hot water, but knowing that it would happen, how it would feel, and mentally preparing for the sensation allowed me to control my reaction.

And that is the power in this practice. In a world where so much is beyond our control and where forces larger than us seem to thrust us about like flotsam in the tide, this minor discomfort activated a superpower of discipline and self-management that I had only fleetingly experienced in other parts of my life. It changed my meditation practice and my workouts, and now it was time to take it outdoors, to the cold.

There I was, a mile into the woods, situated on a table-sized rock slab, armed with breathing practices and a newfound mastery of matter that promised to render this spring-fed stream into a veritable bubble bath. I performed my breathing exercises as usual and steeled myself for the bolt of ice that would hit me momentarily, though I had asked my girlfriend to come along, just as a precaution. I stripped down to running shorts and planted my right leg into the stream, then my left.

All of the breathing in the world was not enough for me to submerge myself beyond mid-thigh. This was truly hors catégorie cold – so fiercely frigid that it almost burned. I could feel that it was helpful for my calf and thigh muscles, so I stuck it out for a minute or so before calling off the foolishness. I could not envision going any deeper than that.

The next weekend, though, air temperatures remained relatively warm, buoyed by the remnants of a tropical depression that was petering out over New England, so I made my way to a different set of falls – this one less secluded and shaded but still charged with ice-cold mountaintop spring water. I had performed the breathing exercises earlier that morning and decided to forego them in favor of immediately hitting the pool below the falls, this time with a knit hat on to cap my body heat.

I tiptoed out to the deepest part of the pool, the waterline hitting my thighs, then my waist. The falls, flush with rainwater from the storm, sprayed a fine mist on my torso, accelerating my desire to just get it over with, and soon I was up to my shoulders in very, very cold water.

For about two minutes, I could think about little more than how cold the water was, which is the point. But in the middle of November, it is safe to say I was the only human being in Northwest Connecticut who was submerged in a natural waterway, which was exhilarating to know. As I dried off and prepared to hike out, the sense of calm and connection that I felt to the natural world was profound. It was as if I had merged with the surroundings and shared their pulse for a few minutes. I’m not sure that I’ll be going for a dip again next weekend, or even this winter, but eventually, after I warm up, I’ll be back. 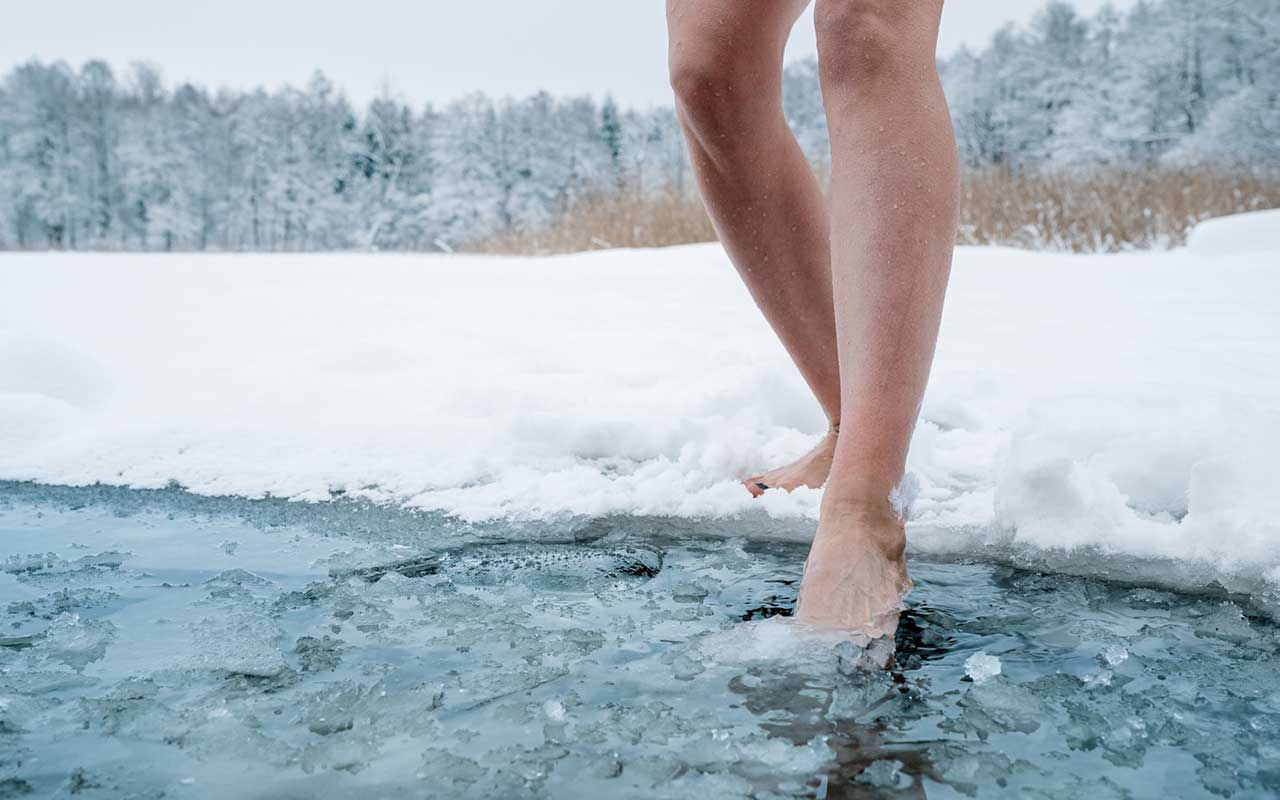