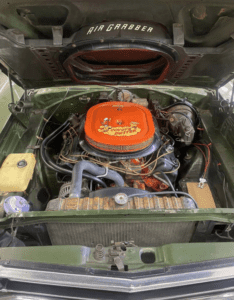 As a kid, I was always brought along to big, loud car shows and flashy, bustling car auctions. Meanwhile, I never really understood why anything besides the fried food was so important. Cars haven’t been a huge part of my life by any means, but attending these events while growing up showed me just how passionate my father, Eric Clark, is about vehicles. Thus, whenever the topic arises, I can’t help but think about the many classic cars my dad has tucked away in his formidable garage. From a ‘56 Bel Air, to a ‘70 Chevelle, to a ‘71 Nova, the vehicles that have come into his possession over the years have always interested anyone who gets to see them. Of course, when I was little, I thought they were cool to look at and fun to ride around in, but nothing beyond that.

This was, until, a new car was brought home.

Right away, its distinct green color made this car stand out among the rest of my dad’s black, white, and silver collection on an aesthetic level. But this visual difference only scratches the surface of this car’s importance. Behind this vehicle’s existence lies a legendary story that I only learned in full when I finally asked my dad.

A legend was born

After sitting down with my dad, it turns out that I just needed to ask one simple question: “What is the story behind your ‘69 Hemi Roadrunner?”

Before my dad purchased the vehicle, or was even born, this car created quite the name for itself in Columbia County. He told me about this part of the story to illustrate the extent to which this vehicle caused a scene:

“The car has some serious local history. First and foremost, the car was sold brand new in Hudson, NY, and has never left Columbia County. It’s never even been more than 15 miles away from its original dealership.”

“The first owner drag raced the car and didn’t do a lot of modifications to it, but ran it really hard. Subsequently, it lost its original transmission, so it was replaced with a Hemi four speed transmission. The car was eventually stolen from the local bowling alley and recovered. Then, the car was impounded by the State Police when one night, the original owner was out with a bunch of his buddies and speeding. He outran the cops with the Hemi, but the police knew the car, so they showed up at the guy’s house the next morning and impounded the car claiming that it wasn’t street legal – in their mind it was too fast, and they thought there was no way that a production car could have that motor in it. In order to get the car out of impound, the owner had to hire the sales manager from a different dealer to come with the book for the Hemi and prove that the car could be built and purchased from the factory with that motor in it.”

“Until fairly recently, the car was owned by Don. He was a GM technician and the car was always kept in prime condition: it was never left sitting outside, it was never driven in the salt, and it was consistently maintained. Don then, as he got older, put the car away in his garage, where it stayed until 2013.”

At this point, my dad dives into his side of the story, which is really the other necessary half of what makes this car so notable. And to be fair, while I was certainly old enough to understand this process when it was happening, like I mentioned before, I didn’t feel the need to learn the details of this transaction until after the fact:

“Now the story moves to one of our annual clambakes in 2013. Don Campbell, a close personal friend, was in my garage, which is mostly full of GM vehicles – collector vehicles. Don, off the cuff, said, ‘Geez you should really have a Mopar in here.’ Mopar is a division, it kind of covers the bases of Plymouth, Chrysler, and Dodge. So I just laughed it off, because I didn’t really think anything of it. So later that evening when we were saying goodbye, we shook hands and he said to me, ‘You know, I was serious about that Mopar comment.’ And I said back to him, ‘Well Don, the only Mopar I would ever consider owning would be your Plymouth Roadrunner.’ And he said, ‘That’s what I’m talking about.’ And I paused, with great surprise, and I said, ‘Oh!’ And he said, ‘Well, if it’s something you want to talk about, give me a call.’”

“So of course, I didn’t hesitate. Within a few days I gave him a call. I hadn’t actually seen the car in probably five or six, possibly ten years, so I called him, then went up and looked at the car. It had been stored in his garage all this time, so the Hemi was pretty much resurrected and brought out in the daylight for us to look at. It hadn’t been outside since – maybe – 1992. Long story short, I had the car inspected by an independent appraisal guy, we decided on a price, I offered the price, I purchased the car, and then I got the car home. This process was actually super busy, and around the time I was negotiating buying the car, unfortunately my father passed away. Because of this, I almost backed out of the deal. But then, my wife said to me, ‘Well, if your dad was still alive he would say go get that car,’ which gave me the perspective to realize I had to go through with it – and I got the car and brought it home. We began to take the car apart that winter; we went through the car not to restore it, but just to clean it and do obvious service to it. Again, for over 15 to 16 years it just sat. I made some really close friends during this process. That winter also helped me grieve my father’s death because I was distracted with working on the car.”

On the show circuit

“Once I felt it was ready, the following spring I decided to show the car. I started bringing it to local shows. There is a local show that gets (kind of) national recognition because it’s sponsored by Hemmings Motor News. When I showed it there, some chatter began about how special the car is. I always knew it had a really late build date when compared to the rest of the ‘69 Hemi Roadrunners that were made, so we researched and found exactly how late my car was produced. Surprisingly, we came to find out the car is documented as the last ‘69 Hemi Roadrunner built. At the time, no one knew that. Sure, I knew that it had a late build date, but until we had a professional guy spend seven hours documenting the car – and he owns the records to prove that it is the last ‘69 Hemi Roadrunner built – we really didn’t know it was the final one.”

“After showing the car and learning this incredible news, people started to contact me about it; they were naturally intrigued by the car’s newfound mystique, and it’s indeed a pretty special car. A Hemi car from the 1960s to begin with is ultra rare, but this one has a fascinating history, and has never been fully restored, which truly reflects the car’s past. Really, the tires on it are from around 1976, and it looks, runs, and smells just like 1974. Better yet, when we started to run the numbers on the car, we also found it’s only one of 200 ‘69 Hemi Roadrunners ever built. We also discovered that it’s believed to be a ‘one of one,’ meaning that with the options – color, motor, transmission, brakes – it’s one of only one built, while also being the last of its kind built.”

The car was such a big hit in its unique and truly historic quality that it was given a six-page spread in Hemmings’ Muscle Machines Magazine in the November 2019 issue. But on the whole, regardless of the publicity, what this remarkable vehicle makes clear is that whether a classic car is racing around the county, or simply sitting in a garage for years, it likely has a story to tell that can bring people together – just as my dad’s ‘69 Hemi Roadrunner has accomplished! •