The Millbrook School Was Founded 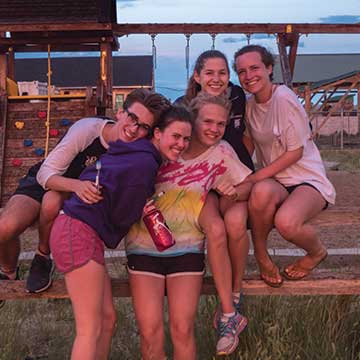 “Our motto is Non Sibi Sed Cunctis, meaning not for oneself but for all or, for all others,” said Cameron Hardy, who serves as the school chaplain and is co-director of Diversity, Equity, and Inclusion at the school. “In its early days (the school was founded in 1931 during the Great Depression) this took the form of serving local farmers by helping them till soil, harvest, and help with animal husbandry, especially during the war years. Primarily it was carried out within the school, where every student and faculty member contributed to the welfare of the whole.”

Hardy called community outreach “one of our most important core values.” She added, “It is absolutely essential in order for us to live our mission. Empathy, responsibility, empowerment to take action based on core values, which lead to effective change and justice. Our commitment to community service and service learning is school-wide. It’s safe to say that every one of our students and faculty will have engaged in some form of direct service and community engagement in their time at Millbrook.”

Acts of service and their organization

The school’s domestic/community outreach is managed weekly by its Outreach and Literacy Connections Community Service teams, so there is dedicated time in daily schedules. The Outreach Team hosts fundraisers to financially support these efforts.

“Any outreach/service learning opportunities involving travel do take a great deal of time and effort to plan and execute,” explained Hardy. “We start at least a year in advance, partnering with agencies, communicating with families, applying for visas, etc., and preparing the group through education and reflection. We have built up a financial aid budget over time so that these expensive trips are open to all students.”

Activities by students and staff early on in the school’s history and as the years went by included such tasks as running the fire station, caring for zoo animals, tracking and banding birds for the Audubon Society, and running the school store and bank. Said Hardy, “These were not just jobs but acts of service, student-led, which taught responsibility to the common good in a democratic society.”

That model is still in place at Millbrook. The school has a “community service block” woven into its school day, four days each week. With the expansion the campus population, facilities, and programs the school has expanded offerings to include those that reach beyond the campus proper and are facilitated through various departments and programs. In Hardy’s 30 years at Millbrook, this type of community outreach has been “vibrant and varied.”

One of Millbrook School’s newest community services is Milly Thrift,  a thrift store that “up-cycles” and sells clothing donated by students and faculty. All of the proceeds go to local agencies or families in need. This fall, through Sunday pop-up shops by the school’s students and staff, $1,500 was raised, some of which went to the Food Bank of the Hudson Valley and to a local farmer whose hay barn burned to the ground in October.

A spring semester course will investigate poverty and educational inequity faced by residents of Dutchess County. Hardy said through readings across disciplines, films and guest speakers, students will explore the nature and extent of poverty and educational inequity in the region. “We will consider philosophical and systemic questions, such as why is poverty so persistent in our area, even as it becomes more affluent; why are poverty rates for minorities and children so high; are public schools effective or ineffective in breaking the cycle of poverty; what moral and legal rights should the poor have, and what obligations do society, organizations and individuals have to the poor?”

Millbrook School has had long-term relationships with a handful of organizations beginning in the early 2000s. Facilitated primarily by an Outreach Community Service group, students and faculty work with Literacy Connections and Grace Latino Outreach each week teaching ESL to adults and caring for their children in Millbrook and Pawling. The school provides and/or packs food for the Comida de Vida clients (families) at St. Thomas Episcopal Church in Amenia and the Union Guatemalan Seekers in Dover and Pawling.

Since 2003, the school has been a member of the Midnight Run (midnightrun.org), a non-profit that organizes groups to bring food, clothing, and conversation to un-housed individuals in Manhattan, NY. “We drive down at night and are given a route of stops throughout the city where folks gather,” said Hardy. “We do a similar project in Poughkeepsie through Dutchess Outreach called the Bright Nights run. It is a similar concept, but a lot closer and therefore with more frequency.”

The Millbrook School has engaged in week-long projects with the Anderson Center for Autism, Winter Haven, House of Hope, and the St. Patrick’s Soup Kitchen in Newburgh, The Lunch Box in Poughkeepsie, Habitat for Humanity, Hudson River Housing – to name a few. “Some of our VI Form (Senior) projects and internships have evolved from relationships with these organizations,” said Hardy.

There’s also a program called Millbrook Engage, which is open to “rising” seniors. Said Hardy, “In the summer before their final year, juniors are given the opportunity to apply for a paid internship with an organization of their choosing, entirely oriented to service but in an area of particular interest to the student. There were 13 students that were interns last summer.”

For the past five summers, going further afield, the Millbrook School has partnered with Simply Smiles, Inc., sending students and faculty to the Cheyenne River Lakota Sioux Reservation in South Dakota where the school group lives in the village of residents, learning from elders and bringing activities to conduct camps for children, as well as doing some manual labor constructing homes and a community hall.

“We have sent three groups to do hurricane relief in Pass Christian, MS, after Katrina and then another four years of groups working with the St. Bernard’s Parish in New Orleans; several to Red Hook/Brooklyn after Sandy, one to Houston after Harvey, and another group to Puerto Rico after Maria,” said Hardy.

She continued, “In my time, our first international group trip was organized in 2006 by our headmaster, Drew Casertano and Liz Morrison, our former assistant head who brought a group of students to Guatemala City to work at Safe Passage. Safe Passage works with the poorest of Guatemala City, those families who live and work in the Guatemala City dump collecting a living from garbage. Safe Passage has founded a school and safe place for the children to learn and play, programs for mothers to become more economically self-sufficient through artisanship and education. Drew and Liz took the trip with a dozen students every year from 2006 to 2014 spending time teaching children and youth lacrosse as a means to gain confidence and camaraderie.”

A former dean of faculty and one of Millbrook School’s most senior faculty members, Kathy Havard, developed the Social Justice and Community Engagement course and is “singularly responsible,” said Hardy for maintaining the school’s relationships with Literacy Connections and Grace Immigrant Outreach. Havard has been to Ghana and India, “embodying just as powerfully as Drew Casertano, our mission and values”.

In 2011, Hardy and three colleagues brought a group of eight students to Ghana, working with Hearts of the Father Outreach, an organization that not only has a children’s home of its own, but also supports a network of children’s homes and schools throughout Ghana. “We were there for three weeks, working with the children, learning from them, and touring the country. We returned in 2012, 2014, and 2018. We are also one of the pioneer schools hosting Ghanian students from the Right to Dream Academy, therefore we shifted from working with the Hearts of the Father Outreach to working directly with the Right to Dream Academy. We were to return this past summer but those plans were interrupted by COVID-19.”

Having made a commitment to having some form of international outreach opportunity every year, Hardy and other staff took students to India in 2013 and 2015 and Cambodia in 2016 in alternate years partnering with Deep Griha Society in Pune, a non-profit that supports mothers and children in the slums of Pune through education, healthcare, children’s crèches (nursery-day care), and youth empowerment. They also have a rural boarding school for orphaned or foster children from Pune called City of Child and a school called City of Knowledge, which provides educational opportunities and community building for rural children.

Millbrook School’s community outreach programs have had a significant impact on its students.

Jackie Crowley, who worked with the Western Connecticut Health Network as a senior said, “I learned that little things matter and that becomes really apparent when you interact with families and patents in a hospital.”

Jonathan Dastazio, another graduate, said of his time with the organization, Rural Build, “I know I want to follow a path of community service. If I can find a way to help combat housing insecurity in the region that is what I want to do.”

For Millbrook School’s founding headmaster, Edward Pulling, the purpose of the community service/outreach program at Millbrook was to have every student maintain responsible leadership in service as a part of their daily life, therefore creating a culture of student-driven empathic leadership.

Said Hardy, “Thanks to headmaster Drew Casertano, whose leadership embodies our mission this is the culture of our school to this day. With the exception of our relationship with Safe Passage in Guatemala, which significantly was forged by our headmaster, all other relationships with agencies have been inspired by students and alumni, such as Simply Smiles, Hearts of the Father, Comida de Vida/Food of Life, Midnight Run, Habitat for Humanity, the Bright Nights Run, Anderson Center for Autism, and Hudson River Housing, to name a few.”

For staff and students at The Millbrook School, charity starts on campus but reaches out across the globe. •