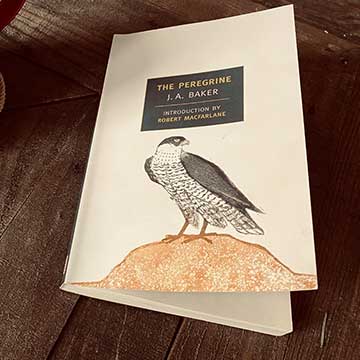 I hope this finds you in a quiet place: the armchair by the window, a glass of cabernet at your elbow. Or under a baffle of comforters, with the bed stand lamp the only light on in the house. I’d even take a bathroom, so long as it isn’t too large, and the exhaust fan drowns out the sound of kids in the other room. Wherever you can find silence, allow yourself to read these lines about the song of a nightjar, or whip-poor-will, out loud:

Its song is like the sound of a stream of wine spilling from a height into a deep and booming cask. It is an odorous sound, with a bouquet that rises to the quiet sky. In the glare of day it would seem thinner and drier, but dusk mellows it and gives it vintage. If a song could smell, this song would smell of crushed grapes and almonds and dark wood. The sound spills out, and none of it is lost. The whole wood brims with it. Then it stops.

These lines form a preamble to an extended meditation on a more fabled bird, the peregrine falcon, in The Peregrine by J.A. Baker. Although he would only write two books in his lifetime, Baker’s tour de force stands alongside such classics as Aldo Leopold’s A Sand County Almanac and Annie Dillard’s Pilgrim at Tinker Creek as a primer on the careful observation of nature’s most ephemeral wonders.

Somehow, through a Masters program in English, over a decade teaching, and a lifetime of reading, Baker’s work had eluded me until earlier this winter. After days spent in front of screens, I’d discovered that listening to books before falling asleep had the dual benefit of resting my eyes and focusing my brain on something other than mundane stressors and concerns. I’ve burned through a swath of Audible, absorbing about a third of each book as I doze off to the mellifluous tones of the reader. In most cases, the prose is unremarkable.

The Peregrine, however, read by David Attenborough, is arresting. His reading recalls the intimacy of vinyl records, and the imagery of Baker’s prose transports the listener to the estuarial lands of southeast England, where the narrator relates his flirtation with a pair of peregrine falcons that inhabit the marshes, fields, and woods of that area. Over the course of seven months, he obsessively tracks the birds, describing in exquisite and exacting detail not only the mechanics of their existence, but the grace, beauty, and magnificence of the creatures. As the excellent nature writer Robert Macfarlane writes in the introduction, “The book records these months of chase in all their agitated, monomaniacal repetitiveness, and describes them in a style so intense and incantatory that the act of bird-watching becomes one of sacred ritual.”

The Peregrine is a perfect companion to the winter. The harshness of the season suits the austerity of these birds and the hunter who keeps vigil for a glimpse of the “passionate intensity” that inspired works like Yeats’s The Second Coming and the “fearful symmetry” of Blake’s tigers. It is a season for watching tracks in the snow, and a season of deprivation, when natural selection mandates the unforgiving ruthlessness of these predators.

Yet Baker’s prose is as indulgent as hygge, and he languorously considers the minutest details, for, as he cautions the reader, he has “tried to preserve a unity, binding together the bird, the watcher, and the place that holds them both.” Twenty-five pages after making this promise, Baker is true to his word:

Wherever he goes, this winter, I will follow him. I will share the fear, and the exaltation, and the boredom, of the hunting life. I will follow him till my predatory human shape no longer darkens in terror the shaken kaleidoscope of color that stains the deep fovea of his brilliant eye. My pagan head shall sink into the winter land, and there be purified.

The “sacred ritual” described by Macfarlane is evident in Baker’s diction here, one of dozens of instances where his imagery enthralls and delights, inviting the reader to savor his observations, to let them infuse a snowbound afternoon with the redolence of an artful image.

Baker’s use of metaphor and synesthesia, or the use of one sense’s imagery to invoke another’s, contribute to the richness of the prose. The lowlands of East Anglia blossom in his description:

South is a bright, blocked space, opaque and stifling; West is a thickening of the earth into trees, a drawing together, the great beef side of England, the heavenly haunch; North is open, bleak, a way to nothing; East is a quickening in the sky, a beckoning of light, a storming suddenness of sea, Time is measured by a clock of blood.

Masterful nature writing not only transports the reader, but expresses an appreciation for our surroundings that constitutes a call for conservation. Leopold, Dillard, and Carson made their marks in literature and environmental activism, and Baker’s work, published in 1967, portends the holocaust for predatory birds that Carson documents in Silent Spring. While Carson dwells on the “elixirs of death” that devastated American raptors, Baker elegizes their English counterparts with prescient foreboding. “Few peregrines are left, there will be fewer, they may not survive. Many die on their backs, clutching insanely in their last convulsions, withered and burnt away by the filthy, insidious pollen of farm chemicals.”

Fortunately, Carson’s call-to-action, while predating Baker’s work, stayed the doomsday scenario he foretold. We can now see peregrine falcons in our area, alongside bald eagles and other survivors and, after setting aside The Peregrine, step out into the countryside on a winter’s morning to marvel at them in person.