“You Kids Are Always on Your Phones” 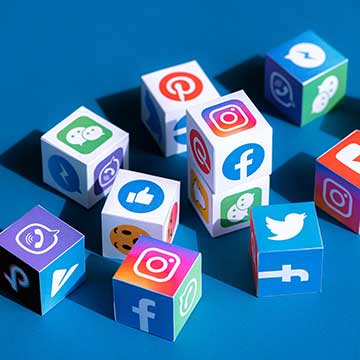 Social media plays a prominent part in most, if not all, of our lives. It might have been a Facebook post that brought you to this article online, or maybe an Instagram story reminded you to pick up a copy of Main Street. Even if social media did not play a part in your reading this, social media still influences so much of what people do and when or why they do it. As a 20-year-old college student, I know that social media has become essentially pivotal, hugely shaping the trends and general behavior of young people. Whether you’ve used these sites yourself, have only heard about them on the news, or know nothing about them, it’s important to learn a bit about some of these platforms. I’m going to briefly cover a few of the older, more common sites, and then dive into two more recent apps that have been garnering attention.

Instagram has developed many add-ons since its establishment as a photo sharing app (not to mention a whole unspoken set of evolving expectations among younger users). Your feed is what you mainly see on the app, showing you all the pictures (or videos) that the people you follow have posted (along with some recommended posts or ads). Whether it’s a friend posting about their beach vacation, a college posting about an upcoming event, a business posting about a sale, or a local channel posting about breaking news, these posts can vary vastly in topic. You can also make a “story” post, which is just like a main post but formatted differently and can be viewed by your followers for 24 hours only. Your profile shows all your posts, and your stories if you wish to organize them there. You can like other people’s posts, comment on them, save them, or share them (by reposting to your story or direct messaging the post to someone else, among other ways). There are privacy settings you can adjust which allow you to have a private, public, or business account. The “Explore Page” on the app gives people a chance to search for content or profiles and shows users a never-ending grid of posts or “Reels” that they might enjoy based on data collected about their preferences. Reels are formatted differently than regular posts, have their own page in the app, and are very similar to TikToks, which I will discuss later. Instagram also developed a shopping section where you can buy the items you see in a post.

Snapchat, on the other hand, is basically like texting through pictures. Mainly, you can send pictures or videos with text to talk with friends. Within the app, you can also text your friends as you normally would. Snapchat launched a “stories” feature prior to Instagram, where you can post pictures or videos to be viewed by followers in a 24-hour span. You can save Snapchats or stories to your “Memories” just like you would save photos to your phone’s camera roll. Another notable feature is “Snap Maps,” a location sharing feature that allows you to show your current location to friends on a global map.

Like Instagram, Twitter has become a platform for people to share and learn information (adding a whole new, troublesome layer of having to vet sources and fact-check). With a character limit that is now 280 per tweet, people can share their thoughts about essentially any topic (accompanied by the media of their choosing) in tweets and threads of multiple tweets. The trending tab on the app shows the hot topics being discussed the most at a given time, whether these are tailored to you, to your country, or to a certain topic, like sports. Twitter has become quite news-oriented, and unfortunately, out of habit, I turn to the app for breaking news often. As with Instagram, you can create your own profile; like, share, re-tweet, and bookmark tweets; and direct message others. Twitter also recently added a new feature called “Spaces” in which you can talk with other users about a specific topic through audio, like a live podcast.

TikTok, from the perspective of my generation, used to be a bit of a silly platform at its inception. Stemming from the app Musical.ly, it was initially perceived as a place for pre-teens to lip sync songs … and that was about it. But as more people flocked to TikTok – for a while, it was popular for people like my friends to claim they downloaded the app “as a joke” – it had such an increasingly large user base that it became serious for a lot of people, including myself.

The main attraction when you open the app is a never-ending “For You Page” in which the app’s algorithm develops a scarily accurate idea of what content you like, what content you dislike, and what content is popular or getting people talking – all developed by you scrolling past videos, staying to watch them, reading the comments on them, liking them, saving them, etc. The content here is videos only. These are formatted to take up your whole phone screen (which is also the case with Reels), and people can record audio, use music, or consult existing “audios” as the sound for these videos. You have your own profile as with Instagram where all your posts reside, alongside your likes and saved videos (your followers and the public don’t see these unless you allow them to). You can set your account to private or public, depending on if you want to try your hand at going viral! Also, within the app, you can send videos to your friends, and watch or launch your own live streams depending on the extent of your following. Besides the For You Page are the “Following” and “Friends” tabs where you see content from everyone you follow and the people you follow who follow you back, respectively.

One misconception to clear up about apps like TikTok is that just because someone has the app and uses it, does not mean they have to contribute their own content to the app. For the first year or so that I had TikTok, it was merely so that I could watch other people’s funny videos, share them with my friends, and be up to date on trends. Not having TikTok had become a social barrier for me, and by downloading the app, I was less giving into peer pressure, and more broadening my horizons to better relate to those around me. Eventually, I started posting videos to a private account, just so that my friends and I can laugh rather than so that I can get public attention (which is quite a scary concept to me!). The point here, then, is that you can choose the level of involvement you wish to have and avoid anything daunting or too “public.”

The algorithm and overall atmosphere of TikTok is a more complicated story, and it can be quite an overwhelming experience when engaging with so much content (and by extension, so many varying ideas and perspectives) at once. Finding the right balance can be notoriously difficult with TikTok because of the way that a constant stream of content finds you the second you open the app. In my experience, I can be stuck in front of the screen for hours if I don’t recognize what I’m doing and put the phone down, and sometimes I even delete the app for a while.

BeReal has emerged recently as a less “performative” social media option. In my experience, I still feel like it’s a performance. To explain what I mean by that, I’ll begin with the concept itself. Once a day, at any time, users of the app will get a notification that it’s “Time to BeReal.” Whether this appears on your phone while you’re eating breakfast, enjoying a concert, trying to get some sleep, or doing the world’s most mundane activity, the idea is that you open the app and capture your “BeReal.” You are given a two-minute span (or sometimes less depending on when you click the notification) to take a picture of what’s in front of you with your back-facing camera, and then a picture of yourself with your front-facing camera. The concept is about trying to achieve a realistic, unfiltered view of what people are up to all at the same given moment.

There are a few loopholes and details about this worth pointing out. The most important of these is that you can post late to BeReal – or, in other words, you can wait until you’re doing something cool, and all your friends will be notified when you post late. However, you can’t see anyone else’s posts for the day until you post your own. As with any app, you can delete your BeReal after you post it. During the two-minute span you are given to take your BeReal, you can retake it as many times as you want, and the number of retakes you have is displayed below your picture when someone clicks on three dots in the corner. And if someone screenshots your BeReal picture, you can share your own post to find out who it was.

A fun feature of the app is that you can react to other people’s BeReal posts with “RealMojis” – basically a selfie in a little circle that will appear at the bottom of another person’s post. On this app, you don’t have a “profile” really, just your username and a profile picture. Your BeReal disappears and gets replaced with a new one the next time you take it, and only you can go back and see your previous posts. Like most sites, BeReal has options to caption your BeReal picture and leave comments on other people’s.

Whether BeReal will stay relevant like other photo sharing platforms remains to be seen. In the case of BeReal, I’ve found it’s more of a fun addition to all the other platforms. I ended up getting into it myself because all my friends had it, and it became a social thing. Whether you wish to download any of these sites is entirely up to you, and like any social media, they can certainly have their downsides and negative parts. Nevertheless, I find that it’s still valuable to be in the know about these platforms and what they have to offer.