We feel it only fair to offer this gentle warning before you invest a few moments reading what follows. This piece is a bit different than others we have written. It draws heavily on history, reflects on those historical references and, with no subtlety intended, holds a mirror to what has become almost a cliché – “the moment we are in.”

But, is it engaging? We hope so. You’ll have to be the judge.

So with that as prologue, let us please introduce you to Myron H. Dean. He is a man, slight of stature, who endured long periods of illness, but managed to recover and forge a life that had both meaning and purpose. 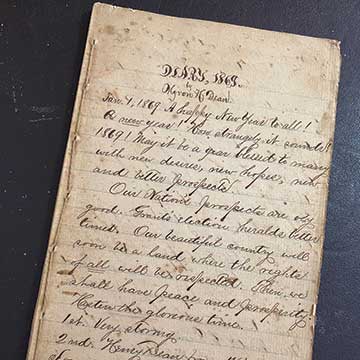 Myron was a bit of a dreamer. His yearn to travel included the wish that he could visit Paris … but that was never to happen. Once he had mastered the rail journey from Falls Village to New Haven and beyond, Chicago was about as far afield he would get from his home in Falls Village, CT. He counted himself lucky for the journey and celebrated every new adventure.

“Now I should like to travel some and see whether adjoining towns are like Canaan! Wouldn’t I like to explore the beautiful valley of the Hudson, to see with my own eyes the great ocean, to walk the streets of New York, to climb the White Mountains and to roam over the prairies of the West? I hope that some time I may see some of these things.” (June 11, 1868)

Dean was largely self-educated, but in the system current at the time, was called on to be a contract teacher at several of the local schools, expressed appreciation for the experience and hoped the mark he had left on his “scholars,” as he called them would be helpful to them in later life. He even went so far, at the end of each term, to purchase small gifts for his pupils, trying to match the gift with the person … a china cup for a young lady, perhaps a pocket knife for a young man.

Dean’s primary task in life, however, was to be an accomplished farmer, raising fruit, vegetables, livestock and developing a great skill at sugaring the abundance of maple trees that dotted his family farm on what was known, during his life, as “The Barrack.” Today it is known as Music Mountain out of recognition of the music festival that has been a landmark in the region since 1930.

Mostly, Myron Dean was a thinker. Unwilling to move routinely through life, he read voraciously, was involved in local politics, attended church when the weather and his health would permit, and kept an annual diary that touched on the weather, the cycle of crops, the success of his rock-strewn farm, observations made through a telescope of his own construction with lenses purchased on a journey of discovery to New Haven when he was 25 years old … and his unvarnished observations about politics and the state of the state and country.

Saved from “The Dump”

Dean’s carefully handwritten diaries, each year thread bound by hand, could easily have met the fate of so many bits of ephemera that are discarded when old houses are emptied and redone. But for the inquisitive eye of the occupant of a house that today stands near to Dean’s family home, the diaries would have gone to the local transfer station and been lost. Paper yellowed with age and ghosts of cursive writing bleeding through, they are still legible and invite the reader to a curated journey through the mind of a true New Englander.

Here are some bits and pieces of the thinking of Myron H. Dean, 1845-1931. The quotes are direct and unedited. If, with a casual read, one might find similarities to the passions and crises of 2020 in observations from 1870, then one is encouraged to smile, faintly, and recall the words of the philosopher George Santayana. “Those who do not learn history are condemned to repeat it.”

“Election. James E. English elected governor and Wm. H. Barnum Congressman from the 4th District. If I were he (Barnum), I should be ashamed to show my head. Liquor and money were free to anybody who would take and vote for him. W. H’s expenses to secure the election are said to have been fully $100,000. The first Dem. Gov. for 13 or 14 yrs. Liquor makes copperheads. Truth crushed to earth will rise again. Cast my first vote for Marshall Jewell for governor. He was defeated by English by 1772 majority. I also voted for Theodore Gold for Senator and Wallace W. Millard for Representative. Both were defeated. Lucky in my choice, wasn’t I? I am not ashamed of the men I voted for nor of my principles either.” (April 1, 1867)

A year later, Dean’s indignation had begun to boil up even more:

“Women are not allowed the right of voting! I never had mistrusted such a thing before! This is an absurd injustice and I hope that not many years shall pass before it shall be a thing of the past and all shall be accorded their just rights.” (May 24, 1868)

All politics is local … except when it’s not

Presidential politics were a raging spectator sport long before the days when Sunday professional football games pitted cities against cities and biased voting determined which motion picture was “Best” or magazines gleefully revealed who they determined to be “Person of the Year.” (Remember, it was not too terribly long ago when that title was “Man of the Year,” which would likely have outraged Myron Dean).

“Impeachment has failed and Andrew Johnson is still the President of the United States. Justice demanded his conviction and by just one vote it failed. And wherefore? Has not the nation suffered enough? Must it again be bitterly taught that the Lord reigns and that justice cannot be subverted with impunity? I hope not, but may He lead this people to do right and may this country seen be pacified and united in the bonds of Christian love. But does the acquittal of the President prove his innocence? Far from it. When 35 Senators declared their conviction of his guilt and only 14 his innocence, is it probable that he was unjustly charged with crime? No! Andrew Johnson was guilty of the charges laid against him. He meant to rule alone. Claiming more power than any European despot he intended to subvert Congress and whatever might be against him, by military power, if necessary (I believe) and with absolute sway rule the country in the interests of rebels. What he will now do, we can only wait to see. And may those Senators who were base enough to sell their honor for gold, meet the just reward of their infamy by losing all the respect which the country has given them. If little criminals suffer, big ones certainly should.” (May 17, 1868)

Honest government, equal rights for both men and women, regardless of color or political persuasions … and, we can’t forget temperance. Those were the issues that often riled Myron Dean to the point of taking pen in hand and memorializing his thoughts.

But, truth be told, there was another side of Dean that could well be a moment of reflection for us all. Life 150 years ago looked a great deal different than it does today. For Dean, the backward glance served to remind him of the fact that in his corner of a country that was not even 100 years old, there was good reason to celebrate and to live in hope.

“We are better educated, more civilized and on the whole living in a much better day than that of our ancestors. How many, if they could, would have things now as they were in those ‘good old times?’ None, I believe.” (June 18, 1868)

For those who find the perceptions and reflections of those who walked these roads and fields long before we came intriguing, contact with the local historical society may open doors and provide a sense of history and balance. Enjoy the journey. •