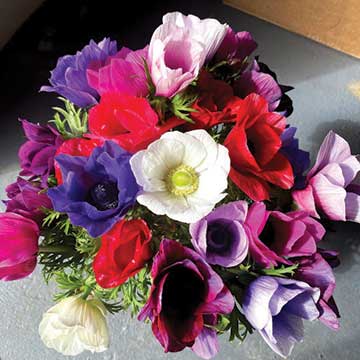 Colorful blooms in shades of red, blue, white, and other vibrant hues are the focus of business for F.W. Battenfeld & Son – a family-run farm in Red Hook, NY. The company, which is currently helmed by Fred Battenfeld, his son Lance and daughter Morgan, traces its history back to 1906. Fred represents the fourth generation of the family presiding over the farm while Lance and Morgan claim fifth-generation status.

It was their relative Conrad Battenfeld who planted the initial seeds for the family farming business. In the 1880s, he and his wife Elizabeth left Germany and landed in the fertile Hudson Valley region. Beyond the local markets that dotted the area, this upstate locale by the Hudson River offered easy access to the markets down river in New York City. It was an ideal location for starting a farming business.

In the early days, F.W. Battenfeld & Son’s business focused on food items such as fruits and vegetables as well as livestock. Years later, it segued into the flower industry, specifically the business of growing violets. At the time, violets were the most coveted flower in America. The charming town of Rhinebeck, NY, was once renowned as the Violet Capital of the World. After World War II, demand waned, so F.W. Battenfeld & Son shifted gears and began growing anemones.

Anemones hail from the Buttercup family and grow wild in many regions of the world. The soft, delicate flowers are native to the temperate and subtropical regions of all continents except Australia and Antarctica. According to Battenfeld, it’s widely believed that the first Western anemones were brought back by the Crusaders from the Holy Land.

Battenfelds provides some history on these pretty flowers. It believes that cultivation began in Europe in the late 1600s, notably in Belgium, Holland, and France. By the mid-18th Century, the anemones business blossomed into a thriving industry. F.W. Battenfeld & Son’s Hybrid Anemones are derived of the de Caen variety. Their origins can be traced back to the vicinity of Caen on the Normandy coast of France.

The anemone is one of the earliest flowers to bloom in spring, appearing in April, and continuing through May. The seasonal flower business generally runs from May through September. Due to cold temperatures, it’s possible that the blossoms may not be available during some weeks in November and December.

Battenfeld’s anemones are picked, graded, and bunched by hand. “The process needs to be done before daylight when the flowers are still closed,” says Lance Battenfeld who is the farm manager. That means Lance and the rest of the Battenfeld’s crew rise early in the morning. In the spring, the team starts at 5:30am. The flowers are cut during the morning and shipped out that same afternoon.

The bulk of Battenfeld’s sales service wholesale accounts. Many of the flowers snapped up by wholesalers are later used to embellish posh resorts, chic hotels, restaurants, and event spaces. Beyond the hospitality industry, florists also covet these bold blooms for weddings and other types of lavish events.

Over the past forty years, Battenfelds has blossomed into the world’s premier developer and harvester of hybrid anemones. “We are considered one of the biggest anemone growers in the country and one of the best in the world,” says Lance.

Although the nine-month wholesale growing business only extends from May through September, Lance says that in a good year, Battenfelds grows one million blooms. New York City and Boston are primary markets, but the pretty florals are shipped all over the country – even as far away as Hawaii.

Beyond the wholesale anemone business, Battenfelds boasts a retail shop that is open year-round to the public. The shop, which is located on the premises, offers colorful bunches of anemones in a wide palette of hues. During months that the anemones aren’t in bloom, soft, delicate dahlias and dreamy, romantic peonies are offered. Distribution is limited to a first-come-first-serve basis. Payment is cash-only.

Every year, families flock to the farm to select and cut their trees, and continue family traditions. Before the pandemic, the annual holiday festivities lured families and crowds of revelers who made a daytime event out of the tree-cutting tradition. The festive experience included Santa Claus, fun, wintry horse-drawn carriage rides, music from a talented bagpipe band, and tailgating celebrations.

“It’s become a multi-generational tradition. This ‘day event’ has become more about selling an experience than a product,” reveals Lance.

The Hudson Valley community, which has been home to several generations of the Battenfelds, also plays a key role in the Hudson Valley farm business. Beyond supplying stunning florals to deck out event spaces for local fundraising events, F.W. Battenfeld & Son also supports community organizations such as the Mental Health Association in Ulster County and the Mental Health Association in Dutchess County. The Battenfelds enjoy giving back to the community – one that has played such a key role in the livelihoods of them and their ancestors. •