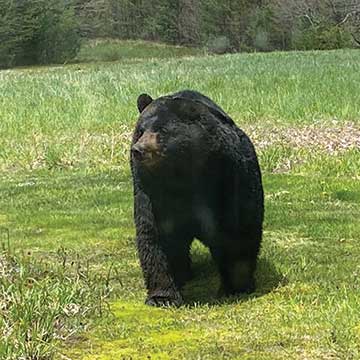 A week on, the vacuum still picks up the occasional wiry hair. It would seem that the dining room rug has been crisscrossed 20 times, and yet the mementos of our nighttime guest persist. But, in fairness, back to the beginning.

For those of us who have chosen to live in the country, whether it’s a weekend and summer getaway or year round, proximity to wildlife seems to be part of the charm. We’ll often overhear snippets of conversations spiced with “our deer…” or “our bobcat…” as we patrol the aisles of the local market. They’re not really “ours,” but there’s a certain satisfaction in seeing a bit of wildlife through the front windows and more than one amateur photographer has shared online posts featuring their bear and their bird feeder.

When the outside came in…

We were solidly in that camp – finding time in conversations to regale our audience with the latest update. The bear in the apple tree across the road. Yes, “in,” not simply “at.” The bear scratching its back on the utility pole near the road. The bear strolling down the driveway, migrating from the back woods to the brook.

It was only when the outside came in … when the distant photography model managed to ransack the kitchen while we slept that the laughter quickly faded.

Bears seem to be everywhere

Dumpsters behind restaurants and markets are easy targets as are garbage cans left outside. The unpleasant task of grabbing a shovel and cleaning up after a late night snack-attack is familiar to many. When the discovery of the mess is made on entering your kitchen at 7am, ready to brew up the morning pot and turn on the news, it’s quite a different story.

So, “our” bear came to visit. With apparent ease, it tore off the screen on the one window we had inadvertently left open for the night, crawled in, moved from dining room to kitchen, upset the trash can and rifled its contents, then moved to the cabinet with the cookies, crackers, sugar, flour, bags of potato chips, bottles of olive oil, unopened jars of salsa and artichoke hearts …  You get the picture.

Apparently satisfied that the meal was sufficient, the bear ambled back into the dining room and out the same window, leaving hair on the floor, around the window, and on the outside deck. All of this was accomplished while we slept, ceiling fan humming through the warm night, some 45 feet away.

Back again and a swift response

We will admit that, especially in a time of pandemic, restrictions, shut downs, and general disarray, we did not expect to get a quick response from the people of DEEP (we live in Connecticut). When we sensed, and saw that our uninvited guest had returned the following evening and was contemplating another attempt at entry, we yelled, banged a cooking pot, and generally made a ruckus to chase it off, then went immediately to the computer to search the DEEP website, fill out an incident report, and go to sleep keeping one ear and one eye open, metal lawn furniture piled against the windows overlooking the deck.

We were shocked and amazed when at 8am the following morning, the phone rang and one of Connecticut’s biologists calmly reviewed the story and assured us that a bear trap would be appearing in a few hours. It did and the gaping trap was set, replete with its day old donut bait offering an invitation to the bear.

We waited. But, not for long. Apparently bears really like day-old donuts.

In the morning, the trap door had been triggered and, within the huge metal tube, the lump of a bear was snoozing. A call to the hotline was all that it took to have a team of three specialists appear and begin what would become a five hour process of anaesthetizing the bear, pulling it out of the trap, measuring it, taking hair and dental samples, tagging its ear, dragging it to a nearby tree to hoist it with an industrial scale to weigh it (481.5 pounds!!!), then get it back into the trap to finish out its slumber.

For what seemed like an eternity, we sat, talked, sipped lemonade, learned from the biologist about the finer details of being a bear, waved at passersby who “rubber necked” at the festivities, then finally saw our guest stirring.

What happened next seemed surreal. Once it was determined that the bear had control of all four legs, the “hazing” began. The thinking is that if a bear has a truly unpleasant experience, it will avoid the location … in this case, our house.

It was loud and harsh from 30 yards away. Inside the trap, it must have seemed like the end of the world. Five minutes of racket and mayhem, banging and yelling and it was time to go.

With all in attendance standing at a safe distance, the trap was opened for the final time and with shouts, air horns, and beanbags, the intruder took to the woods. Gone.

The team went in hot pursuit, following the still disoriented bear through the nearby woods, safely across the road, and into the marsh area nearby. “He’s likely going to find a comfortable spot to lie down and sleep that off,” offered Paul Rego, the compassionate biologist who led the team.

And, so it goes

The ensuing nights have been quite tame. The weather has turned cooler, so the fan is no longer humming through the night in the bedroom. There are crows, blue jays, deer, and a rabbit that have been attracted to the apple tree … but no bear. Is he gone? We can’t offer a definitive answer, but he’s not here. A bear can range up to 30 square miles, so there are plenty of hills and valleys in the Litchfield Hills that may seem a bit more hospitable.

You can be assured that all of the windows are down and secured each night when we make the final stroll through the house. We are wildlife lovers, but not wildlife fools.

Now, if you’ll excuse us, we’ll get the vacuum cleaner out again and make another pass at the rug. We’re certain we found another three inch black hair hiding in a corner.