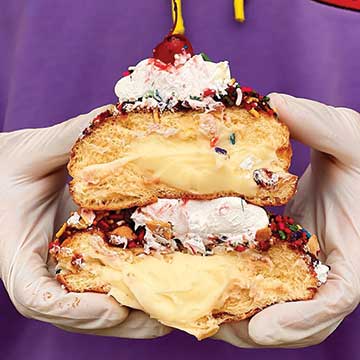 What could possibly be more difficult to resist when we resolve ourselves for the new year than temptation? Be it a new weight-loss goal, abandoning an unhealthy habit like smoking, or simply managing a few spending tendencies – temptation will eventually make its unwelcome presence known at some point within the coming months. Sometimes however, it is important that we not lose ourselves in the jungle of anxiety that can come with self-improvement. Our temptations can at times reveal who we are with the kind of subtlety not found in the grandiose proclamations of the new year. For one local family, temptation became the idea for a business that would eventually open the door to a whole new world.

It was her own temptation that gave Jhori Jurgenson, owner of the local phenomena of a donut shop known as Cosmic Donuts, the inspiration that led to the unstoppable ambition. Alongside her mother and longtime boyfriend Jason Garvey, the young entrepreneur opened Cosmic Donuts in the village of Kinderhook, NY, in 2020, a year that has since gained an historic infamy for small business owners everywhere. Despite the challenges, Cosmic Donuts has done more than simply beat the odds, the gourmet donut shop has become a veritable celebrity on social media as well as within the local community at large. With their dazzling displays of sweet creativity infused into each delicious fried ring, Jurgenson and her family of co-workers seem to be on a cosmic rise to the top of the donut kingdom. In between manic shifts and lines of customers akin to hardcore fans queued out the door, Jhori took some time to discuss how temptation became the driving force behind a life she could have never imagined just one year ago.

How did the idea for Cosmic Donuts come about?

The idea for Cosmic was years in the making – a few years ago my partner Jason and I competed in competitive bodybuilding. With the rigidity of our diet, we always – and I mean always – craved donuts: big, fluffy, overindulgent donuts. We searched everywhere for donuts like these and couldn’t find any locally, so we started daydreaming of the possibility of owning a donut shop. Fast forward to March 2020, in the middle of a pandemic, with a newborn, and I was feeling pretty bored and needed motivation to start something. I was visiting my mom and the idea just popped into my head: “Hey, let’s open a donut shop.” And we did. We immediately got to work planning, designing, working on recipes – and within seven months we opened the doors of Cosmic Donuts!

Has baking been a passion of yours for a while?

Baking has always been a passion of mine, but one that I really only ever did in my spare time. I started off with cupcakes years ago, dabbled in cakes, and then worked in a bakery for a short period of time. I love the creativity and science of baking – there’s so much ingenuity to be had and the options are endless, especially when it comes to donuts.

Would you describe Cosmic Donuts as a family enterprise? How has the experience of owning a family business been for you?

Cosmic Donuts is definitely a family enterprise – my mother and I are there five days a week – she does the dough-making and frying and I create the butter creams, icings, and recipes that we use once the donuts are ready to be filled and decorated. Jason works full-time at the Columbia-County Sheriff’s Department, but when he has a little time he’ll help in the shop, whether it’s putting boxes together or making donuts. My older son earns money working in the shop on his days off from school and our ten-month old has spent most of his life so far in the donut shop! The experience of owning a family business has been both fun and stressful at times – working with family can be extremely challenging and we all definitely have our moments.

How did Cosmic Donuts come to Kinderhook?

Kinderhook was our location of choice because I spent most of my adolescent years in the area and my family and I live nearby. Kinderhook is a quaint town and we felt it needed a little something more – something quirky and different – and we feel Cosmic Donuts does just that. We found a perfect spot right in town and got to work making it as weird and different as possible, and we think our little multi-colored shop with the neon lights in the window brings a little magic to the area. Also, if you’re out early in the morning you can even smell us when you’re near the square!

Where did the idea for all the specialty donuts come from?

Dunkin’ Donuts is the only place to get donuts in the area and we wanted to bring a specialty donut shop – gourmet, if you will – to our little corner of the world instead. Our donuts are fresh-made daily and the flavor varieties are unlike anything else around. You can do literally anything with donuts – they’re just delicious fried balls of dough – and you can dress them up any way you want, which is the best part of the job. We wanted to bring something like that to the area because we realized there was nothing else like it anywhere around! We wanted to become a destination for people like myself who used to drive to other states just for a box of donuts.

How has the community support been since opening?

The community support has been fantastic since we’ve opened – we still reminisce on our first days in business where our line stretched out the door and around the block. Since then we’ve met some pretty fantastic people in the area that come often for our donuts, we have a few weekly regulars who we appreciate so much, and we couldn’t be more thankful for everyone that has supported us since day one.

It’s still extremely surreal to think that I co-own a donut shop in Kinderhook, and we’ve been open for a short while, but have already amassed quite a following and sold thousands (yes, thousands) of donuts! We know our community has played a large role in our success and for that, we are extremely grateful. •