A Different Kind of Rescue Mission 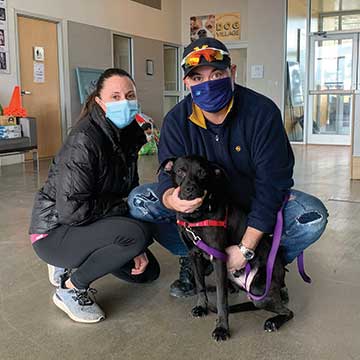 Winter can be tough on many folks. From the moment the first frost settles in the Northeast to the early emergence of the progeny of green flora, the interim months of winter doldrums can have an isolating effect on even the most cheerful. For many, the past year seemed to have encompassed one prolonged, especially frigid winter that proved to be downright relentless. Feelings of winter’s isolation were extended through the summer months and amplified by the spread of the coronavirus. Stay-at-home guidelines implemented to help prevent spikes in infection rates meant more folks spending less time with friends, neighbors, and even family.

Thanks to Dutchess County’s SPCA (DCSPCA), who locals see as an organization that is equal parts animal shelter as well as a vital community resource, many found that much needed connection in the dogs and cats the shelter rescues from abuse and abandonment each year. As a result of their tireless endeavor to build a community in which all animals are treated with compassion and respect, the DCSPCA rekindled the bonds between pet and owner and, as Lynne Meloccaro, the DCSPCA’s executive director explains, redefined the meaning of cold hands, warm heart.

Can you give readers a little background on how the DCSPCA started and its growth over the years?

The Dutchess County SPCA was founded in 1871 by a group of strong and determined women who wanted to address the problem of abused, stray, and abandoned animals in a humane way (generally at that time animals were simply drowned). Throughout the next century, the organization grew into a haven for lost animals, and became the county’s premier organization for rescuing and adopting dogs, cats, and small mammals.

Today, the DCSPCA provides animal control services and housing for numerous townships, and implements the highest standards of animal care for its furry residents. DCSPCA is the only animal welfare organization in Dutchess County that is chartered to enforce humane law; we rescue abused and neglected animals and prosecute the offenders. DCSPCA is an independent, regulated charity, and is not, as many mistakenly believe, an arm of the ASPCA. DCSPCA is, and always will be, a no-kill shelter. We never euthanize for space, only for medical reasons, or if an animal is declared by expert authorities to be dangerous to the public.

How has the last year affected DCSPCA’s ability to find homes for the animals in its shelter?

Finding homes for animals was not particularly an issue while people were quarantined. Many people desired pets to help get them through isolation, and this was a good idea – a loving pet can provide essential emotional support and companionship. We were very careful in our matches as well, so we did not experience a significant increase in returns once quarantine ended, as some other shelters did. For us the greatest challenges were dealing with the large numbers of animals that were surrendered because people became ill, lost their jobs or homes in this dreadful economy, and also trying to fundraise at a time when people generally felt insecure about their own financial situations.

What adjustments were made as a result of the ever-changing guidelines in New York State?

Fortunately, animal shelters were placed on the list of essential services so that we could continue to come to work. But we were of course as concerned about the virus as everyone else. Therefore we closed the shelter to the public except by appointment to control the number of people in the building. We put the majority of animals into foster care so that we could operate with limited staff, and we divided staff into rotational shifts so that if someone should become ill, the entire staff would not have to quarantine. Although we just opened again to the public on weekends, we continue to follow CDC guidelines for the number of people allowed in at one time, masking, and social distancing.

There have been many stories of human connection despite the long months of isolation. Did the DCSPCA experience anything that surprised either staff or adoptees?

I would not say we were surprised, but it certainly exceeded our expectations to see how the animals flourished in foster. Although our shelter is as comfortable as possible for our dogs and cats, nothing replaces being in a home. We saw dogs that had been fearful or depressed turn into happy, tail-wagging pups again, and cats that had hissed at any hand that approached them become purring snuggle-pusses. And the best part was that animals that might not have been looked at twice in the shelter, and who therefore might have endured a long stay here, found homes often with their fosters. Carrie was one example of this, a dog that had been abused and had shut down so much that she would not even lift her head when a potential adopter saw her. Who would want a dog like that? Carrie’s foster did, and now she is part of a loving, doting family. The people that stepped up to foster during the pandemic ended up becoming a close-knit group that regularly communicates with one another through their own Facebook page, offering tips and encouragement. The group continues to grow, and in DCSPCA’s book, they are heroes.

How has the DCSPCA’s New Leadership renewed its commitment to animal care?

After drastically changing all aspects of operation so that the shelter now conforms to national best practices in animal care, we adopted a progressive approach which is based on the needs of the community. When someone gives up an animal, it is often because the human owner is in need of support and assistance; after all, what happens to animals is usually a direct reflection of what happens to humans. Our reimagined mission is to provide as much help as we can to people who have pets so that they don’t have to surrender the pet to us. This past year, we instituted a number of new initiatives such as safety-net boarding for people who just need time to get on their feet again, an emergency medical payment program to help people afford treatment for a pet, field teams that will visit people in their homes to help with behavioral problems in a pet, and a team that will help trap and neuter feral cats and rescue their kittens for adoption. We also offer low-cost spay/neuter and vaccination, including free rabies vaccinations at certain times of the year. The point of all of this is to make DCSPCA not just a warehouse for unwanted animals, but a community resource so that the people of Dutchess County can take care of their animals.

What does the DCSPCA see moving forward into the next year and beyond?

We intend to expand our community programs even more, especially when we begin construction on our new medical clinic. With the Dutchess County Department of Health we are establishing a comprehensive trap-neuter-return program for the enormous number of feral cats in the county. When conditions permit, we will offer regular classes in animal care, dog training, and our “read to the animals” program for primary school children. We are increasing our partnerships with human service organizations such as the Grace Smith House to include services for the homeless, mentally ill, and hospice residents.  We are also investing like never before in humane law enforcement, working with the county legislature and our police partners to propose laws that will be meaningful deterrents to animal abuse.

As we serve the public, we also count on the public to help us in these tasks. The financial calculation for any shelter is simple: the more funds we can raise, the more animals we can help. As DCSPCA continues on its new path, we are hopeful that what we are accomplishing for Dutchess County’s animals will be evident to the community; and also that the community realizes what would happen if DCSPCA were not here, and that people will be moved to help us continue this essential work. •

Since the COVID-19 state of emergency, the Dutchess County SPCA adoption process has changed. The DCSPCA is currently open BY APPOINTMENT ONLY.

If you are interested in adopting any of the DCSPCA’s available pets, please visit the adopt page at www.dcspca.org.  After choosing a pet, complete the online application and submit it for review. If approved, you and your family will be invited to make an appointment to meet the pet to see if you’re a good fit for each other. They can also be reached via phone at (845) 452-7722.