A Happy Hippo Dashes By

Nestled in the Litchfield Hills in Connecticut, Sandra Boynton occupies an archetypical New England farmhouse and works nearby in a towering barn. Her presence in the community is modest. This is no overpowering egomaniac hungry for recognition and attention. She’s simply a person of interest and temperament. She’s just Sandra Boynton.

Every career has a beginning

Her career had a wonderfully understated beginning, a refreshing tone that has continued to be the hallmark of her ascendancy into the rarefied air of internationally celebrated author/illustrators. But Not the Hippopotamus shares the global reverence accorded to, among others, Robert McCloskey’s Make Way For Ducklings, Eric Carle’s The Very Hungry Caterpillar,and Maurice Sendak’s Where the Wild Things Are.

A four page volume (plus cover) signaled her foray into creating picture books. The Funny Animal was Boynton’s first author/illustrator offering. “I don’t know what happened to the original book, alas. But I do have a drawing of mine from more or less the same age – it’s a Scottie dog, with an unexplained star flag perched on his back.”

An early picture of a “Scottie dog,” a favorite subject in early Boynton work, has endured because her parents wanted to share the image with her grandparents. It was memorialized on a tile and shared as early proof of serious talent. Another artifact from that emergent period is a photo of the young author/illustrator indulging in full “Joan Didion, Author” pose, complete with cigarette (see here –>).

Her parents had great influence on Sandra Boynton’s emerging career, as did the Germantown Friends School (GFS) outside of Philadelphia where she studied from kindergarten through grade 12. “Many of my GFS teachers took on very much of a mentor role with their individual students. They weren’t looking for who was ‘gifted.’ They strove to spark and respond to the innate curiosity of each of us.”

Art. Music. Literature. Encouragement. Supportive parents. All of the ingredients for personal success.

College and the awakening

It was on to Yale for her undergraduate study. Boynton selected English as her major and added courses that appealed to her. One of them, a children’s literature seminar presented by Maurice 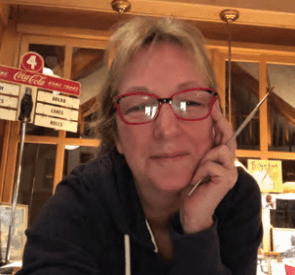 Sendak required admission by portfolio. So, out came the drawings of distinctive animals, and much to her amazement, she was in. Rather than praise the depth of her work, however, Sendak pronounced it “greeting-card art” and proceeded to provide motivation for a next step on the journey.

The usual summer job of being a waitress had no appeal to Boynton, so using her acknowledged skill at “greeting-card art,” she fashioned a series of cards, had them printed and trundled around the Northeast, selling them. At an industry event, Recycled Paper Greetings, a fledgling company, knew genius when they saw it, and Sandra Boynton’s line of clever, captivating greeting cards was launched.

To say that millions of her greeting cards have been sold would not overstate the success of such poignant lines as “Things are getting worse. Send chocolate” or “I’m the loudest, so I’m right!” Accompanied by elegantly simple images of hippos and bears and chickens and cows, the cards  became the “go to” selections for a global audience. Perhaps none is more famous than “Hippo, birdie two ewes” which cemented the Boynton sense of humor as a part of her inimitable style.

The use of animals in children’s book illustrations is hardly new. With many artists attempting realistic presentations of their subjects, the refreshing innocence of Sandra Boynton’s animals invite immediate acceptance for young audiences. Her “board books,” so named because the pages are thicker with rounded corners to mitigate against unwanted injury when the audience decides to chew on the book, rather than merely look at it, have become indispensable parts of the nap and nighttime regimen of countless families.

Taming a bloat of hippos

“The Going to Bed Book” has a hypnotic rhythm until, without warning, the animals do not go to bed, but rather repair to do their exercises. But Not the Hippopotamus seems to bemoan the isolation of the large protagonist until, at last, there is a comforting resolution of community … until an armadillo is introduced that assumes the solo role. The counting book, Hippos Go Berserk! features a bloat of hippos (that’s the term for a pack, a mob, a herd … whatever) carousing at a party. Created while Sandy was a graduate student, the concept was rejected by the first publisher who had the offer. When Recycled Paper saw the book, they set it on a two million copy whirlwind.

In her greeting cards and, certainly, in her books, Boynton elegantly merges visuals and text. The language is spare, not off-putting, and understandable for the youngest observer. This is “as read to” literature, dependent on a literate host to navigate the story. The fact that simple rhyme is a staple of her work makes reading aloud all the more engaging.

Her distinct approach to portraying the animal characters, however, is equally important to the story. “I never HAVE quite settled on my approach!” Boynton protests. “I’ve claimed that I didn’t learn to draw until at least twenty years into my career, and I’m not really kidding. Each drawing is a new puzzle to me, and I do whatever I can manage and take whatever time I need to get a drawing to where it looks pleasing to me.”

Philadelphia Chickens and other classics

It may not seem to be a great leap from children’s literature to children’s music … but that leap requires talent and collaborators. Sandra Boynton made the transition with such ease that it seems, from a distance, effortless.

Three of the six albums of children’s songs she has created have been certified “Gold” for having sold over 500,000 copies. Philadelphia Chickens has been certified “Platinum” (over one million copies sold) and was nominated for a Grammy Award. As for collaborators, along with regular collaborator Michael Ford, Sandy has attracted the collaborative talents of the late B.B. King (One Shoe Blues), Samuel L. Jackson (Tyrannosaurus Funk), and renowned cellist Yo-Yo Ma (Jungle Night).

Aside from the avalanche of books for children that have come out of the imagination of Sandra Boynton, there have been several entries into the world of books for more seasoned readers. Five of them have made appearances on the New York Times Bestsellers list including Chocolate: The Consuming Passion, a 1982 bestseller that has been re-released in celebration of its popularity.

The “re-do” is actually part of Sandra Boynton’s creative style. As technologies have changed, she has been able to re-draw some of her books to make them more in line with her vision of what they should be. One of her towering classics, The Going to Bed Book was originally created in 1985. This fall a “completely redrawn … deluxe picture book version” of the classic will be released, according to Boynton. It will join the release of Jungle Night with the download of the music collaboration with Yo-Yo Ma and Boo, Baa, La La La which will be released for Halloween.

The imaginative world of Sandy Boynton can be joined online at sandraboynton.com. And, although it may be early (or a bit late), Hippo Birdie Two Ewes. • 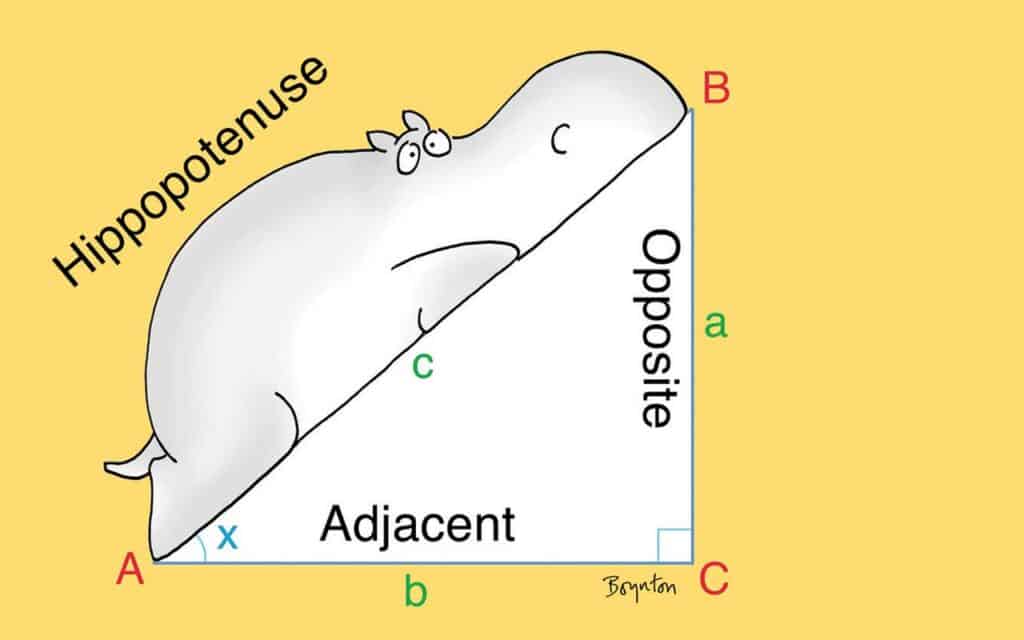