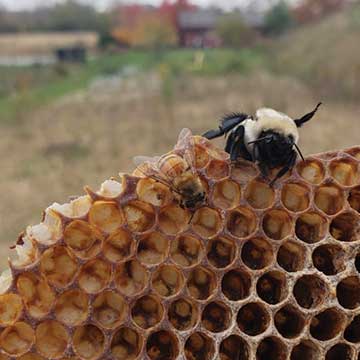 Humans have been intertwined with the life cycle of bees for at least 10,000 years. From the interior of Africa, where the very first recorded beekeeping techniques came via pottery containers, to the walls of Egyptian tombs where human and bee interactions are depicted in ancient forms of Egyptian art, humans and bees have been inextricably woven together throughout the vast honeycomb of history for reasons of survival, sustenance, and most recently – economics. Since the introduction of the movable comb hive in the eighteenth century, the modern value of the bee has mostly to do with what they are able to output, namely perhaps the most ancient human delicacy – honey.

While today’s honey bee might have been domesticated thousands of years ago, the economic fascination with honey persits. Now might be the last affront in the decades of indignities suffered by wild and native bee populations as ecosystems teeter on the verge of collapse. Popular science has propelled awareness for the honey bee onto the international stage in recent years, helping give birth to sustainability programs on behalf of the most common of domesticated species of bee while propagating the perhaps false notion that the honey bee itself is endangered – or anywhere close to it.

According to the US Department of Agriculture, numbers of honey bee colonies have actually risen over the last ten years while the native bee population remains an utter mystery. The reason is perhaps bitterly unsurprising for those committed to organic sustainability. In New York, the honey bee represents a major aspect of the state’s agricultural economy. A veritable army of honey bee colonies are put to work state-wide in order to pollinate more than $300 million worth of mechanized agricultural crops like apples and pumpkins. The 60,000 colonies in New York aren’t the only ones used for agricultural production either, bees are shipped in from all over the world in order to sustain the production of goods as well as being exported to other regions to pollinate mass produced crops.

While honey bees are not currently at risk of extinction due to their economic value, the track of the wild bee remains frighteningly incoherent. With efforts being made to keep honey bee sustainability in the public consciousness growing over time, the decline of native bee species has faded into the periphery of environmental discourse – a fact that may prove detrimental to ecosystems across the planet. While the fabric of the importance of the wild bee continues to be woven thicker and pulled tighter over the eyes of endearing environmentalists, in Millerton, NY, the would-be hero wears a surprising cape. Though commercial beekeepers might be responsible for the majority of the pollination services that take place on behalf of major agriculture, it’s the hobbyist that still maintains an intimate connection with the bees themselves – and the communities they serve ever so faithfully.

“I filled out an application for my beekeeping license in 1983 after I came across a flyer at one of the markets here in town,” says Gino Robustelli, Millerton’s resident acquisitive autodidact who has been beekeeping and spreading the word on sustainability ever since. “I got a knock on my door from a local beekeeper from Avon, CT, a few days later asking me if I would like to help him with his bees. I remember the first time he opened the hive for me he said, ‘You’re a good candidate because you’re not afraid.’”

Shortly after, Gino and his new beekeeping associate became friends and began installing beehives for residents across the area. Over the course of the next few years Gino would help install between 60 and 80 hives along the Route 22 corridor and into Connecticut until the local fad of harvesting honey from the backyard died down and local homeowners lost interest.

“We would be travelling in the van all day with the bees,” Gino recalls. “There would be thousands of bees covering the windows and no partition. My wife couldn’t comprehend how I could stand it, but, the truth is, many people aren’t aware of how docile bees actually are.”

Despite being allergic to bee stings, Gino’s passion for beekeeping and his pursuit of knowledge when it comes to the future of the honey bee, as well as New York’s native bee species, burns with the same passion as it did 30 years ago. “I’m very passionate about beekeeping culture, it’s a niche community and at the same time, the contributions local beekeepers make has a pervasive impact on residents in a variety of ways. The sustainability of the wild bee populations is just as important as we move forward and I’m always eager to share what I’ve learned.”

Today, Gino manages the sustainable honey bee program for the gardens at Silo Ridge in Amenia, NY, where he began planting sunflowers specifically for its bee population when he first started working at the venerated members-only community. Soon after starting at the gardens in Silo Ridge, Gino was asked to lead the honey bee initiative which has since blossomed into the preeminent symbol for local wildlife sustainability. “Silo Ridge is the most sustainable, biodynamic, beekeeping initiative in our area. The leaders there have kept the beekeeping program alive, unwavering in their effort to protect the local honey bee population.”

While Gino enjoys the platform the Silo Ridge initiative offers, he has started something of a cottage industry of his own from the comforts of his home in Millerton where he raises Italian honey bees. Gino specializes in making his very own organic beeswax, hand creams, lip balms, and, of course, honey, which he sells under the name Uncle Gee’s Bees at McEnroe Organic Farm Market in Millerton as well as to friends, family, and anyone willing to give the organic experience a try. When he’s not spending time in his kitchen, steeping his flowers in olive oil for medicinal purposes, Gino has spent time touring area schools with observation hives and early mornings honing his homegrown researching skills. “I’m always reading – staying aware of national and local agricultural issues will effectively grow the already extensive network of knowledeable people in our community. I buy my bees and raise my bees, I would love to start getting the kids in the area involved as well.”

Where the wild bees are

Hometown beekeepers like Gino hold no pretense when it comes to the issues surrounding losses of the North American honey bee, the prevalence of the problems with commercial beekeeping are not lost on the local bee enthusiast. “It’s work, it’s a dedication to maintenance that makes sustainable beekeeping and unfortunately many beekeepers are content with making up for their losses in other ways because it seems easier,” says Gino. “But the fact remains, beekeepers still continue to take too much honey and many of our local bees are being exported to other parts of the country like California to pollinate commercial crops like almond fields.” As a result of their integral contributions to the economic integrity of mass-produced crops, significant efforts have been made on behalf of the scientific community to stem the tide of honey bee population losses. The same cannot be said for another decline – that of the native, or wild bee populations.

“Nobody really knows about the wild bee population,” says Gino whose research has now turned toward understanding native bees and their contributions to local ecosystems. “Typically, when the queen leaves, the swarm follows, making it hard to geographically track the progress of wild bees.” Though beneficial information regarding populations of wild bees remains frustratingly ambiguous, their impact as pollinators of the natural environment is undoubtedly crucial to the future success of area ecosystems. Wild bees, like the eastern bumble bee, of which a number of species have experienced significant declines in recent years, pollinate wild flowers and plants whose seeds feed birds who then feed mammals and thus, maintain ecosystems.

“We don’t plant flowers anymore and as a result, our landscapes are becoming sterile,” Gino says of our pension for planting commercial gardens. “Commercial products like Korean Boxwoods and our habit of seed bombing our backyard gardens contribute to the loss of wild flowers and grasses.”

Indeed, civilized society has a habit of “tidying up” the natural landscape both at home as well as on a larger agricultural scale. For Gino, sustainability means returning to our wilder roots, “We should consider letting more wild grasses grow again. Every spring my family will plant wild flowers and let them be, in fact, if it wasn’t for my wife, everything on my front lawn would consist of wild flowers.”

Still, the neglect of native bee populations persists and for Gino, it starts on an industrial level. “The agricultural neglect begins with a monoculture of planting herbicides in our area like those sprayed over corn for example, a GMO product that is Round-Up ready – meaning planting a barrage of herbicides to kill the weeds around the corn. This not only affects our bees, but has run-off effects on our streams and wells.”

Mechanized agriculture is responsible for feeding people across the planet and there is little doubt regarding its importance in regards to modern commerce. The question remains, what kind of lasting effects does constant landscape alteration have on the natural environment. “Wild bees are being executed by the removal of acres of meadows. Our fields are full of natural grasses, mowing kills the regrowth possibilities. Fields are mowed but not allowed to go fallow, creating sterile landscapes with no wild flowers – this not only has a negative impact on bees, but butterflies and birds as well.”

The issue of native bee decline leaves lingering questions revolving around potential solutions, namely just how harsh the population decline actually is and what are the environmental stressors that are measurable when it comes to wild bees. The answer? Perhaps it’s a matter of simply paying more attention.

For Gino, the communal culture of beekeeping local honey bees, combined with the universal benefits wild bee populations provide, make finding a balance mean bringing hope to all. “The beekeeper is mainly responsible for pollination and yet, it can be a double-edged sword. We should ask ourselves if we are doing enough to support local pollination while at the same time artificially stimulating bee populations.” Simple acts, acts so fundamental to small town life, like letting a bit of our lawns avoid the summer manicure, or returning to the act of planting our own flower gardens again may in fact bear the fruit of sustainable ecosystems that wild bees make possible while allowing for the continued enjoyment of our honey bees, and the sweet nectar they provide.

All statistical information provided on behalf of both the federal and New York State Department of Agriculture.