A Legacy of Liberty 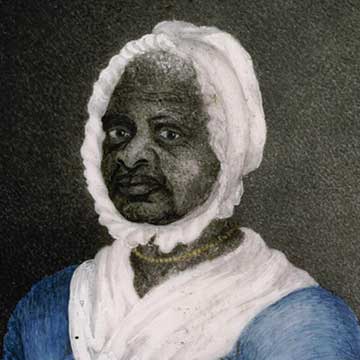 An epitaph written by a man named Charles Sedgwick in 1829 for a family friend reads: “She neither wasted time, nor property. She never violated a trust, nor failed to perform a duty. In every situation of domestic trial, she was the most efficient helper, and the tenderest friend.” This humble, if not innocuous sentiment only vaguely belies the woman who carried the distinctions throughout her life.

Those distinctions would also help that woman, known as Elizabeth Freeman, fight for the most basic of human rights that few others would have during that period in American history. Freeman, who would be known throughout most of her life as “Mum Bett” was born somewhere around the year 1744 in the town of Claverack in Columbia County, NY, as a slave. According to historians, Freeman grew up on the property of Pieter Hogeboom with a young woman named Lizzie, who historians have speculated might have been her younger sister. Hogeboom’s daughter would go on to marry Colonel John Ashley, a wealthy citizen and leader of local militias during the French and Indian War. Freeman would come to their house in Sheffield, MA, much later, though it remains unclear when, how, and why.

It is this house, today known as the Ashley House, that has become inextricably linked to the life and eventual liberty of Elizabeth Freeman. Colonel Ashley built the house in 1735, and spent most of his life accumulating wealth and land while becoming an influential voice within the commonwealth. Ashley would eventually go on to own more than 3,000 acres, including the property adjacent to the Ashley House called Bartholomew’s Cobble, a nature preserve that today, as well as the Ashley House itself, is owned by The Trustees of Reservations, a non-profit organization based in Boston, MA.

Today, The Trustees care for and maintain more than 100 historic places and roughly 27,000 acres throughout the state of Massachusetts. The organization touts its mission as working toward “protecting places of ecological, scenic, and historic importance.” The Trustees search the state for those places that remain most potentially endangered including scenic landscapes and cultural properties. The organization then allocates land stewardship resources and expertise to maintain the historic and aesthetic integrity of local places for future generations.

After having previously been a storage building for decades, descendants of Colonel Ashley bought the house in 1924. Soon after, The Trustees acquired the neighboring Bartholomew’s Cobble in 1936 and, with help from the Colonel Ashley Association, the Ashley House became a historic house museum in 1960 and finally on the National Register of Historic Places in 1972, the same year that The Trustees acquired the house.

Ashley himself was a fervent supporter of the American Revolution and used his influence to form a committee that espoused the ideas of the Revolution eventually writing a petition against British tyranny and a manifesto for individual rights in 1773. The Sheffield Declaration, also known as the Sheffield Resolves, was itself drafted in the upstairs study of the house. Though Ashley may have been among the first to spread the ideals of political liberty in the Berkshires, the painful hypocrisy remained in the fact that Ashley’s own local influence, as well as his financial success, was built in part on the backs of five African Americans who were forced to labor at his home.

From Bett to freedom

“Even as late as the 20th century, the stories of locally enslaved peoples were still not being told as often as they should have been,” says Mark Wilson, Curator of Collections for The Trustees of Reservations. Indeed, Freeman was one of five enslaved people in the Ashley House and despite being a footnote in the annals of American history, the inspiring story of her pursuit of liberty thankfully endures today. Though she could not read or write, Freeman was clever and known for retaining her own agency even as a slave living in the Ashley House.

Historians have said that evidence exists showing Mrs. Ashley – John’s wife – was cruel to her slaves. Reportedly, one afternoon, she attempted to strike Lizzie with a heated kitchen shovel. Freeman bravely attempted to protect her by blocking Mrs. Ashley’s strike but received a serious wound on her arm that never healed. Freeman would leave her wound visible for the rest of her life as testament to her mistreatment and the horrible existence enslaved peoples endured.

The path to freedom

It was Freeman’s staunch courage, and an ironic twist of fate, that would lead her down the path to freedom. The Ashley House and the Colonel’s own revolutionary rhetoric would set the stage for Freeman to use those ideals founded in the Sheffield Declaration to pursue personal liberty. Evidence suggests that, as Ashley moderated the local committee that wrote the Sheffield Declaration in the upstairs study, Freeman overheard these ideas as she went about her daily tasks. In particular, a phrase she heard repeatedly that would cement her resolve for freedom and espouse the plight of her fellow enslaved people:

RESOLVED: That mankind in a state of nature are equal, free and independent of each other and have a right to the undisturbed enjoyment of their lives, their liberty and property.

After mustering the courage to pursue her mission of freedom, Freeman sought the help of a locally prominent attorney named Theodore Sedgwick, a man who had helped Colonel Ashley draft the Sheffield Declaration. In May of 1781, Sedgwick and his legal team filed a document called a “writ of replevin” with the Berkshire Court of Common Pleas. In order to test the Nation’s young constitution on the legality of slavery, it ordered Colonel Ashley to release Freeman as well as another slave in the Ashley household, a man named Brom. The Berkshire Court ruled that Freeman and Brom were not Colonel Ashley’s legitimate property. However, he refused to release them from his possession.

By August 1781, the case went to the County Court of Common Pleas of Great Barrington in the case that has come to be known as Brom and Bett v. Ashley. During the trial, Sedgwick argued that the Massachusetts Constitution outlawed slavery. The jury agreed with Sedgwick and decided that Freeman and Brom were not Colonel Ashley’s property. Both were set free and awarded 30 shillings as well as the costs of the trial. Colonel Ashley filed an appeal to the Supreme Judicial Court but dropped his case a few months later affirming Freeman’s legacy as having helped bring about the of end slavery in Massachusetts.

By winning  her freedom from Colonel Ashley, Freeman became the first enslaved person in Massachusetts to win a freedom suit.

After winning her freedom, Bett became Elizabeth Freeman, her first decision as an independent citizen and referendum on civil liberty.

According to historians, Colonel Ashley asked her several times to return to his home as a paid servant, but she declined. Instead, Freeman chose to take a position in Sedgwick’s household as a caretaker. Freeman also worked as a prominent healer, midwife, nurse, and beloved member of the community of Stockbridge, MA. “I believe she is a national hero,” says Wilson. “She didn’t run away, she didn’t escape, she instead became a driving force behind people using the law to seek freedom.”

Freeman lived out the rest of her days not only as free as any person has the inherent right to be, she also became an extended member of the Sedgwick family. Catharine, the youngest daughter of Judge Theodore Sedgwick, was said to be very close to Freeman, who helped raise the child as her nurse. As a result, upon her death on December 28, 1829 she was buried in the Sedgwick family plot in Stockbridge, MA. She is the only non-Sedgwick to be buried in the family’s inner circle, or as it is known, the “Sedgwick Pie,” of the family plot. Thus the epitaph, written by Theodore’s son Charles Sedgwick, for the life of a woman who defeated injustice through the use of the very constitution drafted to protect freedom without exception, may now be read in full context as we all should in the history of inequality, as follows:

ELIZABETH FREEMAN, known by the name of MUMBET died Dec. 28 1829. Her supposed age was 85 years. She was born a slave and remained a slave for nearly thirty years. She could neither read nor write, yet in her own sphere she had no superior nor equal. She neither wasted time, nor property. She never violated a trust, nor failed to perform a duty. In every situation of domestic trial, she was the most efficient helper, and the tenderest friend. Good mother fare well. •

Visit the www.thetrustees.org for more information on news and initiatives as well as to support their important mission of preservation in our area.

Special thanks to the Massachusetts Historical Society for research material. Visit masshist.org for more information.