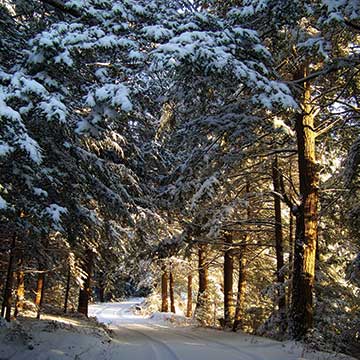 Great Mountain Forest (GMF) is an emerald jewel in the crown of an area that covers over 6,000 acres in Norfolk and Canaan, CT. It also tells many stories – an understory of ecological diversity, a succession story of trees and families, a restoration story, a conservation story, but most of all, a love story between the forest and its stewards.

GMF is what’s known as  a “working forest,” which according to the World Resources Institute means that it is “actively managed to generate revenue from multiple sources, including sustainably produced timber and other ecosystem services,” i.e., services that nature performs in its normal functioning that benefit humans. An example of this at GMF is the sequestering of carbon in tree roots.

GMF is committed to conservation, ecological research, and public education. It’s a forest system that views trees as renewable resources that are sustainably and intentionally managed. GMF also plays a role in the environmental health of the local area by supporting species of trees, plants, wildlife, and fish. Capping off its crucial work is a dedication to public use and recreation with a careful respect for the unseen work of the forest underfoot.

It’s hard to imagine, as you walk through the grand canopy of tree stands in Great Mountain Forest, that in the late 1800s the entirety of the GMF area was virtually cut to the quick for farmlands, pasture, and industrial use.

Wood for charcoal to smelt iron ore and for tanning left a barren landscape. Resource consumption on a grand scale by the Hunts Lyman and the Barnum Richardson Iron Companies without a thought for the future of the land had drastically altered the face of areas of Norfolk and Canaan.

Ahead of their time

In 1909, Frederic C. Walcott and Starling W. Childs, influenced by Progressive conservation measures that protected land across the country, acquired 400 acres near Tobey Pond for public benefit. This was the beginning of Great Mountain Forest. By the 1930s acreage grew to several thousand and Walcott and Childs were actively managing the property, also reintroducing deer and bird life to the area.

During this time of rejuvenation of the land and its species, the men were campaigning to have the State of Connecticut take a more proactive role in land conservation, an area where Walcott and Childs thought the state was lagging. Both were critical to the public-private efforts that proved so effective in conservation efforts across the country. They used the work of GMF to show government officials what was possible in the regeneration and stewardship of land.

In 1913, after several years of advocacy and public education they convinced the state to set aside 15,000 acres for conservation.

In the early 1930s, Childs’ son, Edward “Ted,” graduated from Yale Forest School and took over his father’s half interest. He continued to add land to the forest with Walcott, and in 1948 bought Walcott’s interest in the property after his death.

Ted died in 1996, and in 2003 the Childs family legally protected the forest and placed it under the separate control of a non-profit entity through which it is managed today.

It’s hard to talk about GMF without acknowledging all of its enthusiastic and dedicated staff and interns. Jean Bronson runs programs, raises money, and keeps the public up-to-date on the forest’s activities. She creates diverse programming such as outdoor campfire cooking, educational hikes, and holiday wreath-making, and has found the perfect combination of cheerful efficiency and welcoming host.

Forester Russell Russ followed in his father’s work boots and nearly 20 years ago returned to the forest that he grew up in. Russ keeps track of weather data for GMF and the National Weather Service. He also manages the Yale Forestry Camp, works with researchers, and assists with forestry and maple sugaring.

This October, GMF hired executive director Tamara Muruetagoiena. In her they have found a dedicated environmental professional with expertise in environmental sustainability, goal setting, program management, strategic planning, marketing, and most importantly a deep love of the natural world – and GMF.

In 2005,  Muruetagoiena found herself at the Yale Forestry Camp in the middle of GMF as a student in its School of Forestry and Environmental Sciences. In 2008, she returned as a summer teaching assistant for Yale. In her words, “something clicked.” She found the forest one of the “most magnificent ecosystems” she’d experienced and filled not only with awe-inspiring trees, but amazing people.

Her career path took her to Europe, Latin America, and the Dominican Republic. Her latest post was with Driscoll’s as the senior global manager of sustainability and R&D.

As in nature, serendipity often plays a role in what takes root in a person’s life. The GMF position came at a time when Muruetagoiena was ready to work for an “organization with sustainability as part of its mission.” Weary of a corporate agricultural model that espouses “total domination of humans over nature,” she was ready to trade growing fields for a working forest, where humans take a backseat to natural processes.

Muruetagoiena identifies herself as a forest ecologist, which she describes as “researching, understanding and documenting the interaction between species and environment. The forest is an ecosystem and I try to see the relationships between the trees that grow there and plant and animal life.”

While enamored of phloem, she also loves a good flow chart. She sees one of her strengths as understanding an organizational ecosystem and plotting a path forward to strengthen current activities, programmatic offerings, and revenue and funding streams, and work with her colleagues to devise new areas of growth.

As the executive director, her knowledge of science is in service of managing and creating relationships between species of a different sort – staff, volunteers, board members, donors, and the public.

Working alongside Muruetagoiena is Jody Bronson, GMF’s 40-year forest manager. Bronson is responsible for forestry operations. With a white beard, baseball cap, and outerwear that never seems warm enough for the weather conditions, he knows the land and its trees inside and out and exudes a positive aura that is evidence of the good, calm energy that time in nature can generate.

At GMF Bronson harvests timber, improves wildlife habitat, builds and maintains roads, assists in research, educates the public, and supervises interns. Bronson casts his work as “the manipulation of forest ecology in service of a particular end.” Sometimes this master planning is proactive, e.g., thinning white pines to build vigor in the crowns, or reactive, e.g., harvesting ash that’s been decimated by the emerald ash borer.

For Bronson, what keeps him rooted in place for the past 40 years is the magic and mystical nature of the forest. While he admits that it’s always changing and dynamic, he also finds in the forest the one thing he can come back to over and over. “There’s a certain steadiness and predictability to the forest.”

One area that Muruetagoiena and Bronson want to explore is the remarkable weather data GMF has collected over the past 88 years. This longitudinal data tethered to one particular place can lend an understanding of where patterns of weather become changes in climate.

Superimposed on this analysis is 75 years of maple syrup production data which includes observations of bird, animal and insect life, frozen water, and other anecdotal notes that can provide correlative and causal data about how these factors relate to maple sap levels.

Muruetagoiena observes, “My past work in the sustainability field involves the interpretation of third-party data, which makes the impact more abstract. When I saw our data on weather, it hit me really hard. It was real. It is real – and tied to this place. GMF data is bearing out that weather is getting warmer.”

Bronson can attest that maple production is consistently down. He recounts, “Maple syrup is the lesson we can see. Twenty years ago we had 19 sap collections over a season. It was down to 14 over the past few seasons and last year we had 12. We’re not getting enough of a temperature differential between day and night to get the sap flowing.”

Both want to see this historical data compiled and interpreted in the coming years so GMF can use it in their public programming. They plan to educate others about the role of historical data in tracking climate change in a geographical area we know with a product we can taste.

Aside from timber, one of GMF’s forest products is carbon offset credits. Sections of the forest are set aside for growing tree stock that sequesters carbon, meaning that it traps and stores carbon, thus reducing the amount in the atmosphere.

Muruetagoiena and Bronson agree that the US is way behind Canada and Europe in the administration of carbon offsets, however GMF’s efforts adhere to strict guidelines and are audited and regulated.

Educating for the future

In the center of GMF are seven acres that Ted Childs gave to his alma mater in the late 30s after a hurricane decimated Yale’s own camp in eastern Connecticut. In 1941 Yale School of Forestry began using this land for the Yale Forestry Camp.

Until the 1960s it was used for field training. Today, it’s primarily used for Yale summer programs and graduate school orientation activities. Childs also began summer internship program in 1938 open to forestry students from around the country. To this day, a team of interns works with GMF staff each year to manage the forest and apply classroom learning. This past summer they even built a canoe with wood from the forest!

Both  Muruetagoiena and Bronson have their favorite forest places. For her, it’s Meeker Town cabin where she sees “the coexistence of humans as part of the ecosystem. It gets me in a mindset of Thoreau, where humans are not the dominant species in nature, we’re equal to it.”

For him, it’s the Red Spruce swamp, an untouched dense part of the forest. “It’s primal, quiet, and brings me peace.” Always a forest scientist, he adds, “It’s also a unique ecosystem for this part of CT.”

Muruetagoiena and Bronson see GMF as a narrative tale of the ecological rejuvenation of a region; intentional management of forest products as renewable resources; the interplay of species in the face of unpredictable factors; and the vision of individuals and families who put their trust in the land – and the land in trust.

The moral of this story is that along with serving the public good, land stewardship and economic viability can go hand in hand.

By Mary B. O’Neill, Ph.D. info@mainstreetmag.com