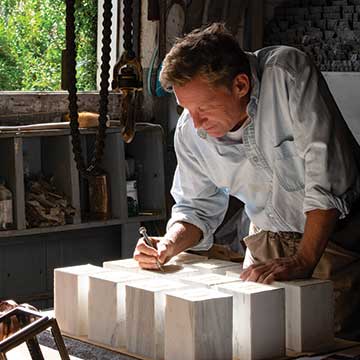 Like the legendary painters of the Hudson River School, or the long and storied line of woodworkers in the villages of the Berkshire foothills, the pantheon of craftsmen in the Northwest Corner of our Tri-state is as sublime as the landscape itself. Carved into the deep roots of local family trees is the history of trades that underline the generational bond between skilled labor and quiet artistry. Such is the case within the hearts of the small hamlets that den themselves within our valley and have, for centuries, kept the spirit of our colonial ancestors alive through their work. In the village of Millerton, NY, the visage of a man huddled serenely over a slab of granite, gingerly stenciling names, dates, patterns and symbols in a lingering cloud of dust while soft jazzy tunes roll out of an old radio evokes the essence of the American craftsman.

A history of memorial

Bruce Valentine, proprietor of Valentine Monument Works, is a fourth-generation artisan specializing in the creation and design of cemetery monuments and headstones. While the occupation itself might seem macabre, Valentine’s meticulous dedication to the faithful preservation of lost loved ones is as celebrated as the Valentine name itself within the small village of Millerton.

“This kind of work, it’s what I’ve grown up with,” Bruce affirms as he stands in his workshop eyeing his current project as would a watchmaker at the turn of the century. “This is something I’ve known for my entire life.”

It is more than simply hours that go into Valentine’s work, it is generations of artisan creation. Valentine Monument Works was founded just a decade after the American Civil War when, in 1875, Bruce’s great grandfather Richard L. Valentine first came to Millerton from the Catskill Mountain Region driven by an entrepreneurial ambition to create something of his own.

“Back then, undertakers didn’t only make coffins and gravestones – they were also cabinetmakers and craftsmen,” says Valentine. “They were artisans in their own right and an important part of the communities in which they lived.” As such, Richard L. Valentine began his journey in the Northwest Corner as both undertaker and cabinetmaker. The home on Park Avenue in which Bruce lives today is the very same that stood while three generations of Valentines established themselves as the community’s most trusted family to preserve and honor the lives of those who have passed on.

“My grandfather Oliver was born in the house,” says Bruce. “He eventually passed the business on to my father Richard before me.” Even the house next door, now the Scott D. Conklin Funeral Home, has remained in the Valentine family throughout the decades. “My sister Jean was a licensed funeral director so she worked there with my father for years,” Valentine recalls. “I can remember as a child hearing my father out in the shop around midnight with his equipment going and machines whirring, it was quite a sight to watch him work.”

In truth, the lasting legacy of small-town family businesses is built less upon any form of nepotism, and more on the laborious lessons learned by observation to the point where practice becomes passion, and passion, into instinct for Bruce. “Throughout my childhood, there were constantly stones scattered around the driveway, especially around holidays of remembrance. We would be out on Memorial Day weekends setting stones from morning to night,” he says. “Looking back on it now, those were some of the best times we had as a family.”

As the torchbearer for Valentine Monument Works today, Bruce is hardly even aware of the requisite skills he has mastered let alone the process of creating a monument itself. “I was born into this kind of work,” he says. “When I’m creating monuments and headstones, I feel an instinctual connection to the work. I hardly even notice the process anymore.”

Much like how a painter muses over his canvas before even contemplating his first stroke, Bruce must first be able to envision the final design, usually with the help of family wishes and several other points of reference. There are normally several aspects to a cemetery monument. Typically, the individual’s name, date of birth and date of death are all regular inclusions. Sometimes, individuals or families will choose to include a brief epitaph or description of the individual being memorialized.

Bruce then utilizes a rubber stencil to illuminate the image or pattern he had originally envisioned after which he uses a special pen to pick away the material covering the lettering and patterns. For decades, Valentine has employed the process known as sandblasting to engrave the final design into stone. After the stencil has been glued onto the stone and the final design chosen, the stone is then placed into a sand blast booth. Bruce stands outside the booth while he, like an artful surgeon, shapes and cuts into the stone with sand. While Bruce applies the extreme temperatures to specific parts of the monument, the letters, dates and patterns begin to take shape. With incredible precision, Valentine’s steady hand delivers his patented detail by removing the polished layers of the granite to reveal what is left unpolished. Deeper sections of the stone are sandblasted more than others in order to create the contrast needed for the headstone to take shape. Bruce’s sandblasting machine, though precise, cannot compare to the level of detail that the homegrown artisan’s eye innately perceives. The titular monument artist then adds the final touches of detail to achieve the level of depth that has been passed down since the 19th century.

The enduring, hands-on approach to preserving the legacy of not only the line of craftsmen begotten under the Valentine name, but to those who have lived and passed in our area is the true monument to this artisan’s labor of love. “Keeping families happy and comfortable during their most difficult times – that is the legacy I want to leave,” Bruce says. “Both in the name of my family, as well as the generations in this community that have come before me.” •