A NEW KIND OF CLASSROOM 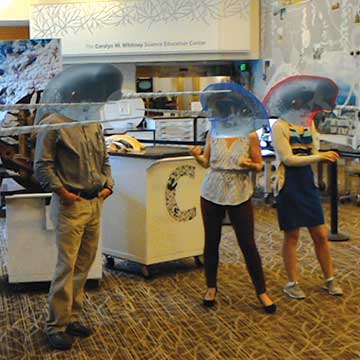 Innovation can happen anywhere. From the grand halls of our institutes of higher learning, the expansive and unimaginably elaborate labs across the planet where we picture the world’s best scientists scurrying about in long white coats testing secret methods whose sole purpose is to change life on earth, to the local country dentist office on the corner of our hometown streets – those men and women we have known all our lives. The future waits for no one, and across our area resourceful folks are hard at work transforming how we experience the modern world.

In Sharon, CT, neighborhood dental surgeon Dr. Martin Nweeia has combined two decades of research and his adoration for the Arctic’s most fascinating whale species with a new and innovative technology that is weaving imaginative and engaging fibers into the tapestry of traditional learning. The male narwhal, one of the most extraordinary animals on the planet with its anomalous tusk protruding in a swordlike fashion through its upper lip, is commonly referred to as the “Unicorn of the Sea.” In order to better understand the narwhal and its iconic tooth, Dr. Nweeia has used his dental medicine expertise, and his standing as assistant professor for Innovative Programs at Case Western Reserve School of Dental Medicine to peer through a unique lens of technological innovation, by visualizing the narwhal through Microsoft’s HoloLens, a revolutionary innovation in augmented reality. What has resulted from this collaboration is a burgeoning shift in medical anatomy education from traditional textual learning to a true sensory experience. A shift that has transformed medical classrooms not only at the venerated Case Western University located in Cleveland, OH, but throughout all higher educational platforms across the country. For his part, Dr. Nweeia has worked fervently to present this immersive augmented reality (AR) experience with narwhals to the greater public, and has enlisted the help of some of the most well-known names both in scientific education and yes – even Hollywood.

Through the holo looking glass

“HoloLens has transformed medical education to the point where the dissection of cadavers is virtually obsolete,” says, Dr. Nweeia. Instead, students at Case Western have begun dissecting virtual holograms of the human body thanks to the university teaming up with Microsoft in 2015 and introducing the tech-giant’s HoloLens, an AR device that allows students and educators to both see, and interact with holographic images. “For many years, past and present, whether we are looking at a phone, computer or television, nearly every connection we have with the outside world comes with a screen attached. Our interaction with the world around us is connected through screens.”

Dr. Nweeia recalls his initial impressions upon first seeing HoloLens technology juxtaposed to the current generation’s interface with the world of screens, “HoloLens brings reality back into the modern world through interactive technology. There will no longer exist an interruption or interface of connectedness between students and the machines they use to engage in learning and life. I immediately saw that technical leap and the applications in medical science at Case, and conceptualized my proposal to bring holographic narwhals to any room on the planet that would welcome them!”

The HoloLens technology was developed by Microsoft as its introduction to the world of AR, something the corporation has termed “mixed reality.” For the less tech-savvy like yours truly, the lens resembles the virtual reality aesthetic of other devices like the Oculus. Though unlike the Oculus, a device primarily used to transport players into an interactive environment in the world of gaming, HoloLens blends the user’s environment seamlessly with holographic software using its own processing power, advanced optics, and sensors in order to engage students with subjects for a more keen comprehension in the field of medical research. The resulting phenomenon has spread throughout higher education like wildfire. A fire that has ignited much debate within the educational science community.

Those who still pine for the days of amphibious dissection say there is a certain immeasurable loss that comes with the phasing out of textile learning. Dr. Nweeia however, a dental professional who cut his teeth in the era of “old-school” scientific education, has been fully reborn in the world of AR learning thanks to HoloLens technology. “There are still those medical practitioners who believe hands-on learning can only be achieved through textile interaction, and sure, there is a big difference between holograms and real cadavers. Indeed, there are pluses and minus to both, but your experience of interactive three dimensional (3D) holographic learning is unmatched with HoloLens. When it comes to real dissection for example, the body often appears mono-gray due to post mortem effects. In the past, this meant students learned operating procedures by texture rather than true-to-life color, three dimensions and functional display, leaving a large disconnect between cadaver and student learning. What HoloLens does is create an immersive understanding and perspective about where things actually are in their 3D orientation. The hardest concepts to learn are 3D ones, like the interactions of viruses and bacteria on normal cells, or embyology where understanding is enhanced with 3D displays rather than descriptive passages and images in textbooks. When it comes to holograms, everything is right in front of you.”

Re-discovering an Arctic legend through the eyes of the narwhal

Thanks to Dr. Nweeia’s diligent pursuit of the most unique of Arctic mammals, the local dentist was among the first to dispel a long-held myth regarding the narwhal’s “tusk.” “It’s the coolest tooth on the planet,” says Nweeia of what was previously believed to be something of a weapon used to fight off other males in a battle for mating purposes. “It’s actually more of a tooth organ system, a giant sensory organ containing millions of little tubules that extend from its inner central nerve to the external ocean environment.”

Unlike other whales who use their extra senses to detect sound and movement much in the way of sonar, the male narwhal sensory “tooth” serves a host of purposes. “It detects particle gradients, pressure, and temperature as opposed to sound. It is, in many ways, like other mammalian teeth like ours but also entirely unique, like no other tooth on the planet since it can continuously monitor its external ocean environment.”

As part of his scientific venture, Dr. Nweeia has participated in eighteen expeditions to the icy Arctic region, carrying the famed New York City’s Explorers Club flag on fourteen of those treacherous adventures. “I’ve been stuck in Arctic hurricanes, hazardous plane landings that became white-knuckle experiences, and had close-ups with polar bears. The hazards are pretty extreme.” All the while, he has taken in the entire scope of the narwhal’s plight, using Inuit knowledge to help understand the biology of the whale as well as the somewhat volatile conditions of its environment. “Our narwhal research is part of a larger climate issue as well since narwhals live in the Arctic where climate change is happening at twice the rate of the rest of the planet. This has an immense impacts on the mammal, and its ecosystem”

It was Dr. Nweeia’s introduction to the Microsoft HoloLens technology that inspired him to take the next step in his research. With the help of some narration from Connecticut local, and legendary actor Meryl Streep, Nweeia launched a brand new interactive ecological experience called Narwhal: Unraveling the Mysteries of the Tusk which debuted at the Smithsonian’s National Museum of Natural History and the American Association for the Advancement of Science this past October. “Working with Meryl Streep was just fabulous, bringing the experience to a whole new level; life and our experience in it is always better with kind, generous, and talented people like her.”

Nweeia co-curated the narwhal exhibit Narwhal: Revealing An Arctic Legend at the Smithsonian, co-authored an award-winning catalogue for the exhibit, and is now co-curating a traveling exhibit with the same name through SITES, the Smithsonian Institution Traveling Exhibit Services. “I had the vision and the technology resources, and with a grant from the National Science Foundation, the vision was now transformed to reality.” As part of the experience, visitors to the experience are immersed in a 3D Arctic world traveling under the ice and swimming with holographic, life-sized narwhals, even becoming a narwhal themselves in the interactive game that concludes the experience, based on scientific findings of how narwhal stun their prey. “It’s a fully interactive AR experience where everyone can get a sense of what an Arctic ocean environment is like, and how the whale swims under the ice by watching them from their position on the ocean floor. As a result, participants are learning while experiencing the narwhal environment, and so the level of engagement is transformative.”

The HoloLens software eliminates spatial perspective, as in the opening scene of the experience when holographic whales are swimming freely within an independently rotating virtual globe. Despite Dr. Nweeia’s two decades of educational knowledge, and thousands of miles of Arctic discovery, he believes he has at last found the kind of innovation that will propel learning into the future. “This is like the invention of the telephone or the computer. Technology has outpaced the classroom and education now needs to catch up; this is the new interface to connect us to the world. I have no doubt the traditional classroom settings will be transformed – this is the future of engagement, motivation, and enhanced comprehension. What better way to experience it, then by diving into the 3D Arctic ocean world of the narwhal, and having Meryl Streep as your guide!” •