A Touch of Holiday Nostalgia

Without question, this is the time of year that is flavored with nostalgia. The daily fusillades of pandemic numbers, employment crises, political caterwauling do little to “make the season bright.” To borrow a holiday standard, “We need a little Christmas … right this very minute.”

Irving Berlin’s White Christmas, is two hours of nostalgia, music and heart-warming stories that whisk the audience away from the terrors of the TV and back into a time and place where life seemed a whole lot easier.

The Berkshire Theatre Group has assembled a talent-rich cast of singers, dancers and actors who, under the guiding hand of director Gregg Edelman transport the Colonial Theatre audience from the end of World War II through the adrenaline rush of The Ed Sullivan Show to a failing Vermont Inn where the estimable talents and efforts of Bob Wallace (Michael Martella) and Phil Davis (Michael Starr) combined with the objects of their affection – sister act Betty and Judy Haynes, played with merry coincidence by sisters Alanna and Claire Saunders – rescue the inn owned by wartime hero General Henry Waverly (David Adkins) from its demise.

There are challenges, twists and turns, pitfalls and pratfalls, but in true American musical tradition, “All’s well that ends …” You get the idea. 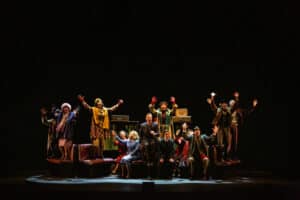 The supporting cast is robust and make the most of choreography created by Gerry Mcintyre and Bryan Thomas Hunt. And the music, the centerpiece of any Irving Berlin outing, is all that one could hope for. Not only does White Christmas appear twice in the production – serving as the resounding, colorfully costumed finale – but other gems of the Great American Songbook are showcased, as well. Blue Skies, I’ve Got My Love to Keep Me Warm, How Deep is the Ocean and Happy Holidays … the libretto is filled with hum-along tunes with easy to decipher lyrics. Inviting the audience to join in the rousing finale puts the bow on the gift as Music Director Ross Patterson leads a skilled group of musicians through the score.

Along with The Nutcracker, A Christmas Carol, Amal and the Night Visitors, the Christmas pageant at the local church and a Salvation Army Band gathered around an open red kettle, this is holiday nostalgia in its purest form.

And, if you need a bit of motivation to be a part of the audience, simply sing along:

I’m dreaming of a White Christmas

Performances of Irving Berlin’s White Christmas run through December 23. Tickets for the performances are available on-line at berkshiretheatregroup.org or by calling the box office at (413) 997-4444.