“Almost all of us grew up eating meat, wearing leather, and going to circuses and zoos. We never considered the impact of these actions on animals involved. For whatever reason, we are now asking the question: “Why should animals have rights?”  Ingrid E. Newkirk, PETA

Veganism is a philosophy of living that seeks to exclude the exploitation of and cruelty to animals, whether for food, clothing, or other purposes. It promotes animal-free alternatives that benefit humans, animals, and the environment.

Veganism considers how we treat all non-human animals including their captivity, mistreatment, and slaughter for human use in clothing, personal care products and cosmetics, animal testing, work, sports, recreation, and zoos. Non-violent civil rights activist Mahatma Gandhi said, “The greatness of a nation and its moral progress can be judged by the way its animals are treated.” Veganism goes beyond a plant-based diet and views non-human animals on an ethical level on par with humans.

The history of veganism

There is a long history of people in ancient Indian and Mediterranean societies who avoided exploitation and cruelty towards non-human animals. Ancient Greek philosopher and mathematician Pythagoras developed the theorem of right triangles and advocated the right treatment of animals through benevolence. The physician Hippocrates noted, “The soul is the same in all living creatures, although the body of each is different.”

Observers of Buddhism, Hinduism, and Jainism also call for a vegetarian diet and that humans should not inflict suffering on their non-human counterparts. Their notion of ahimsa, or “do no harm,” includes respect, reverence, and equality for all life.

The term vegan was coined in England in 1944 by Donald Watson. He expanded on the work of Rev. Sylvester Graham (of Graham cracker fame), who co-founded the American Vegetarian Society in 1850, three years after the first vegetarian society appeared in England. Graham posited that vegetarianism was an ingredient in a virtuous life.

However, this didn’t go far enough for Watson, and he wanted a new term that embraced those who didn’t eat dairy or eggs. The Vegan Society, which he founded, still exists today and serves as a vegan resource.

Vegan philosophy includes an ethical stance about our relationship with non-human animals: All sentient beings have a right to live and be free of suffering.

In the words of author Alice Walker, “the animals of the world exist for their reasons. They were not made for humans any more than blacks were made for whites or women for men.”   Though non-human animals don’t speak our language or may not show human-style intelligence, they still exhibit fear and feel pain.

Speciesism is the term used to describe discrimination against beings of a different species. In the West, it’s common to put humans at the top of the pecking order and categorize species in terms of human-established standards. Because we deem ourselves superior, we see other species as lesser than – less intelligent and less worthy of respect.

This can also translate into treating certain animal species as desirable and more worthy of respect. The sacred cow, our family pet, or a dolphin may rank higher in our estimation than a mouse.

Veganism upends that view and places all human and non-human beings on an ethical equivalent. All lives are equally sacred. Therefore, non-human animal rights and freedom from suffering are the same as human rights. Using and consuming animals and animal products disregards those rights and exploits them for human needs such as food and comfort.

You are what you eat

The most common access point to a vegan world view is through a plant-based diet. A vegan diet eschews any animal products – period. Use and consumption of animal products for human welfare is exploitative. So even products such as eggs, milk, and cheese are not on the menu.

What does that leave us? Well, plants. Fruits, vegetables, legumes, nuts, seeds, and grains are the mainstay of a vegan diet. Vegan does not necessarily mean organic, though as an intentional way of eating, there is often overlap between an organic and plant-based diet. Vegan doesn’t always mean super healthy either. Vegan junk food is a thing. Generally, though, a vegan diet is considered a healthy one.

eating regime to ensure you’re getting essential vitamins and nutrients traditionally found in animal-based foods, including protein, vitamin B12, Omega-3, zinc, iodine, vitamin D, and iron. Yet, these and much more are readily available in a plant-based vegan diet.

Scientific studies show that a plant-based diet reduces heart disease, lowers blood pressure and cholesterol, and helps control type-2 diabetes, amonth other benefits. It may also reduce the risk of some cancers. Many people find it easier to keep a healthy weight with a vegan diet.

Veganism is earth and animal-friendly

Environmentally, one of the best things anyone can do to reduce their carbon footprint and slow climate change is to eat less meat. A vegan diet also addresses world hunger issues. Plant foods use one-third less land and water, and we can feed a lot more people per acre.

There’s no getting around the animal cruelty issue that adopting a vegan philosophy and living a vegan lifestyle seeks to address. You don’t have to look too far to find films and books documenting cruel breeding and living conditions and deaths for factory-farmed and even humanely-raised animals.

While that information can be shocking and overwhelming for a person starting a plant-based diet, to ignore that suffering betrays veganism’s central tenets – humans and animals suffer equally. “Only when we have become non-violent towards all life will we have learned to live well ourselves,” said Civil Rights activist Cesar Chavez.

Introducing more plants into your diet, reducing meat intake, and reconsidering the role of animals in our lives doesn’t have to be complicated or painful. It can start with small changes in the way we eat and evolve from there.

Here are some ways you can baby step into a plant-based diet and vegan lifestyle:

• Inventory what animal products are on your dietary ark right now: Assess your animal product intake as it is. It will point you to places where you can make easy alterations – or where you’re eating more plant-based food than you thought!

• Plan one plant-based meal per week: Alliteration suggests that Meatless Monday is a good day to choose.

• Snack on plants: Put down the beef jerky and grab a handful of nuts or dried fruit.

• Plant a seed: start a small home garden, participate in a CSA or head to a farmer’s market.

• The buddy system: enlist the help or share the journey with a friend or family member to take those first steps down the vegan path.

• Revamp your recipes: Find a vegan cookbook or website that you like and experiment with ingredients and recipes – challenge yourself to adapt your favorite recipes to a vegan ingredient list.

• Read the fine print: Look for product ingredients and the vegan-certified or cruelty-free/no animal testing logo.

Perhaps your foray into a vegan diet begins as an attempt to live a healthier lifestyle. The effects in reducing animal suffering and contributing to a greener planet still ensue, regardless of our intention.

Yet, educating ourselves about veganism, its underlying philosophy of the intrinsic value of animal life, and an end to the commodification of non-human species can be the next step. There are numerous resources that can move us along the continuum from a plant-based diet to a more vegan lifestyle, which impacts our choice of clothes, furniture, health and beauty aids, and recreation.

Once you make a start, you’ll discover that a vegan diet is tasty, satisfying – and healthy. You can experiment and substitute ingredients for familiar, comfort foods like vegan mac and cheese or explore new tastes. Some people find that eating a plant-based diet opens them up to a variety of food not yet explored.

Veganism begins with an awareness of non-human animals and how our actions have far-reaching implications for all living beings. In the words of the recently-deceased physician Dr. Paul Farmer, who was the driving force behind Partners in Health, “The idea that some lives matter less is the root of all that is wrong with the world.”

The first step on the vegan journey can begin in our kitchens. Making those small changes to the meat and dairy we eat can encourage us to examine why we eat those foods and how their consumption has ethical and environmental meaning and impact. •

Robin Zitter has been an animal advocate all her life and vegan for over 35 years. She believes we can all play a part in moving towards a more compassionate and peaceful world. 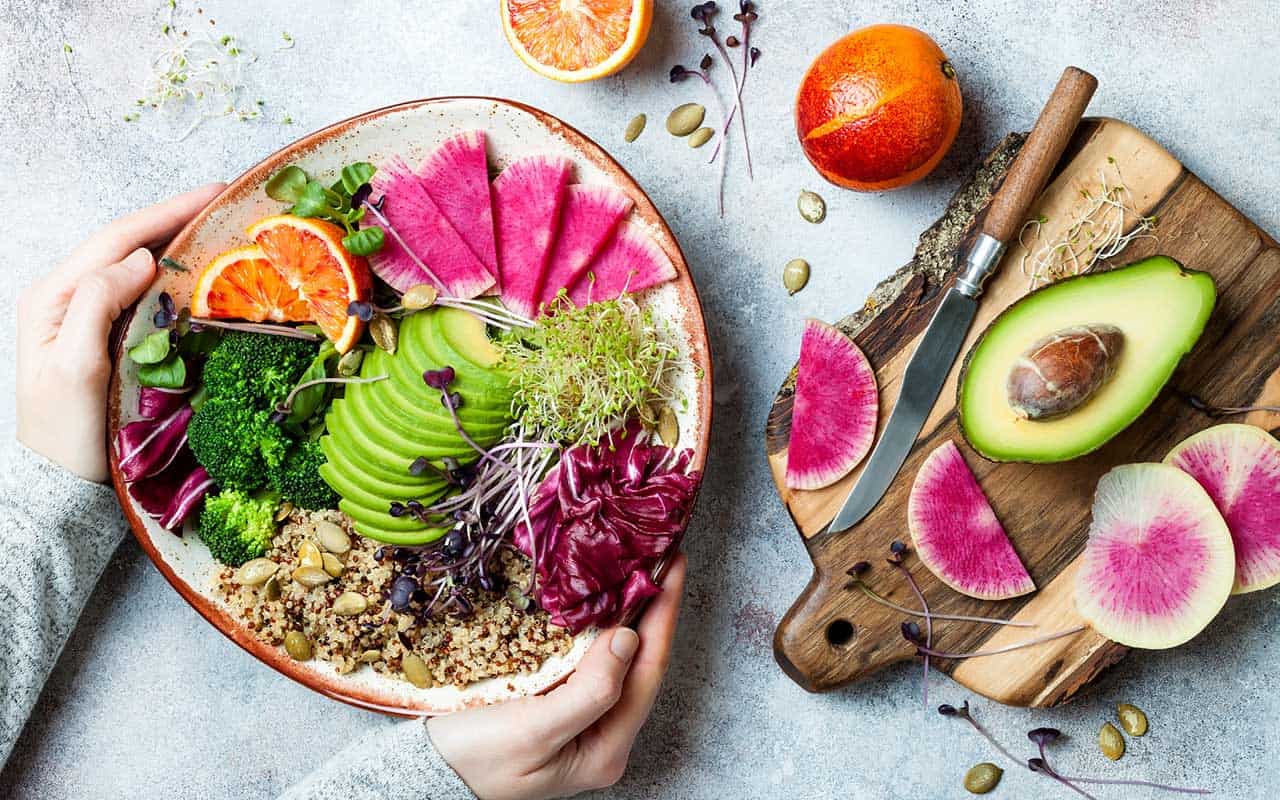