A Walk in the Woods

A ticket to experience “A Walk in the Woods” on stage at Shakespeare & Company in Lenox, MA through September 4th is the invitation to witness a master class in acting cloaked in 2 hours of dramatic brilliance. Lee Blessing’s carefully crafted story of two arms negotiators – Andrey Botvinnick, a Russian played with unbridled enthusiasm and candor by Jonathan Epstein and John Honeyman, his American counterpart portrayed with elegant restraint by Allyn Burrows – was based on the experiences of two negotiators who were only able to reach some accord after leaving the bargaining table and exploring the woods around Geneva, Switzerland. The historic agreement ended up being derailed by the two governments. The results on stage mirror that disappointment and chagrin.

The Pulitzer Prize finalist play has several ties to New England, having first been performed at the Yale Reparatory Theatre before traveling to Broadway, where Connecticut resident Sam Waterston was cast in the role of Honeyman.

As mesmerizing the story line of the play might be – two men, representing two world powers unable to limit nuclear arm proliferation – it is the way in which Epstein and Burrows inhabit those characters that is mesmerizing. The Russian is gifted with both a sense of irony and a playful spirit that seems constantly at odds with the almost humorless character of his American rival. Botvinnick wants to be friends. Honeyman will have nothing of it. Yet, the dialogs over the period of a frustrating year belie the fact that friends they are … and that friendship is the human element played off against the inevitability of two unshakeable, unmoving world powers.

Watching Burrows and Epstein spar, maneuver, “parry and thrust” their ways through the rat’s maze of eventually fruitless negotiations is a pure delight. When they are on stage together, unblinking in their concentration and fully committed to the characters they portray, the audience is drawn in, hanging on every word, every subtle gesture. Director James Warwick has taken a brilliantly conceived “two hander” and made it a convincingly personal exploration of two intelligent, dedicated individuals caught up in the maelstrom of history. In his program notes, Warwick calls out the fact that we are witnessing “two leading players at the top of their craft.” Allyn Burrows and Jonathan Epstein never disappoint. Being “at the top” of any career is a perilous, sometimes lonely position. These two make it seem as natural as the stage set, fashioned from slabs of an ash tree that had towered over the Lenox campus for years before being felled in a storm.

And, the notion of a storm is not without ironic parallel. As the world convulses with the escalating conflict between these same two world powers, have things changed in the 34 years that have ensued since “A Walk in the Woods” premiered on Broadway? Is the play prophetic, or simply an engagingly literate snapshot of a continuum.

Regardless of the answer (if there is one), seeing this production in the outdoor setting of The Roman Garden Theatre at Shakespeare & Company is an experience that should not be missed. Allyn Burrows and Jonathan Epstein, two classically trained Shakespearean actors, are simply superb and members of the audience are the beneficiaries of their estimable talents. 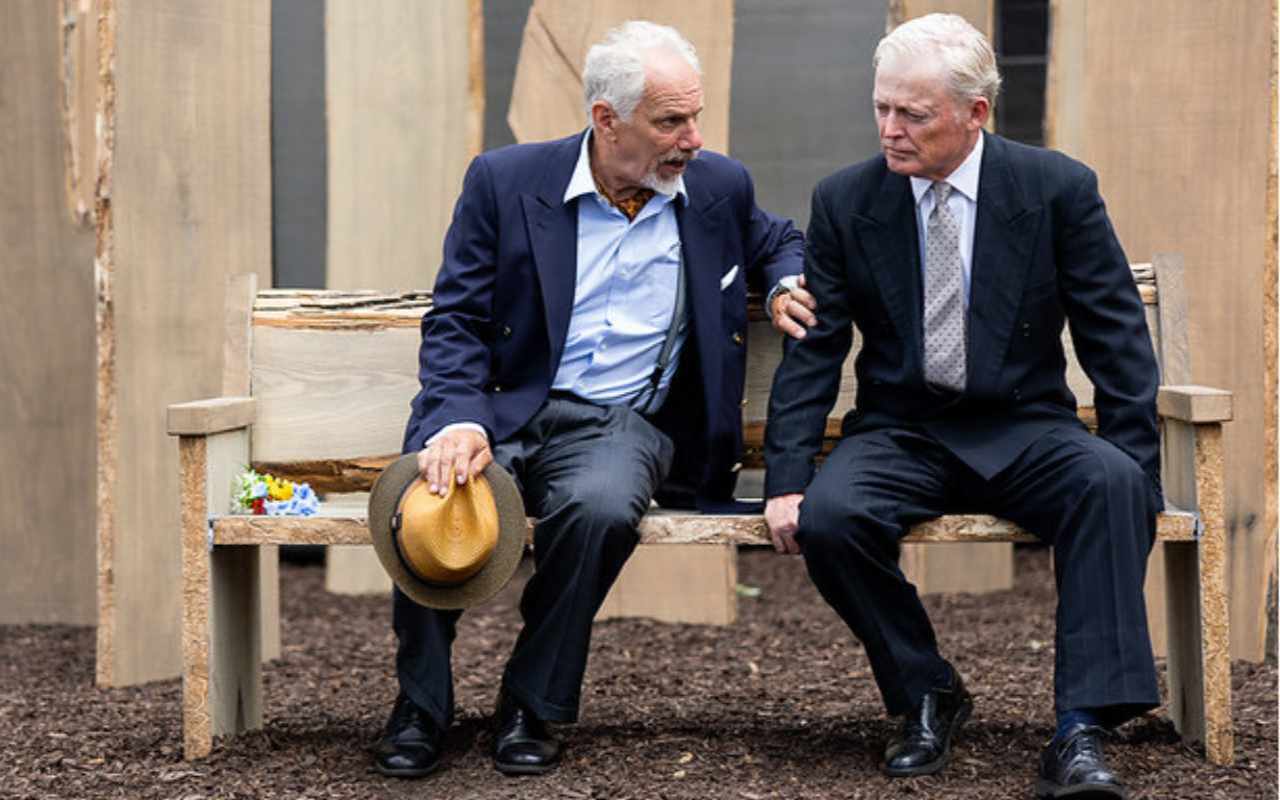 Photo by Nile Scott Studios. Epstein is on the left, Burrows on the right.