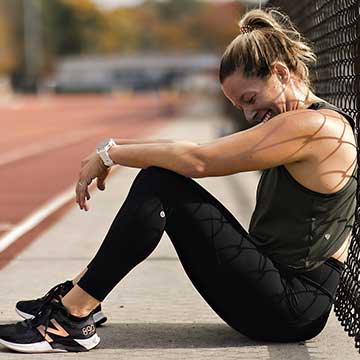 The human body, and its ability to endure, will never cease to captivate and inspire with each story of struggle and perseverance. As the dust settles upon the events of the past year, these stories seem to be more present than ever and continue to hearten the human consciousness – yet they have always been with us. Perhaps the greatest example of human endurance can be found in the world of athletics. For the modern athlete, success is based upon one’s ability to endure. To break down the body in order to build up its physical strength. For the marathon runner, strength is qualified by the athlete’s ability to persevere. The first mile, the pace, gate, second wind, the wall, and the home stretch are all terms that signify the acknowledgment of struggle and the determination to overcome. So what happens when life itself puts you through similar paces both challenging and tragic?

For Kristen Garzone, a graduate of Taconic Hills and later a 4-sport athlete playing Division 3 soccer and lacrosse at Hartwick College in Oneonta, NY, anguish has made her heart grow fonder and her spirit stronger. Kristen, a lifelong runner who completed her first marathon in 2012, thought she had become accustomed to anguish as a necessary element to achieving her athletic goals – until she became a mother herself.

In 2016, Kristen gave birth to her daughter, Ellie and with that extraordinary life moment, came feelings of anger and dissonance. In a morass of sadness and confusion, Kristen didn’t feel connected to her daughter at all and once more, could not understand why. It was at this moment when Kristen unknowingly began her own mental marathon, pushing her will to the limit against postpartum depression (PPD), a widely misunderstood mental health affliction that affects millions of women in the US each year.

Long-distance running, a sport that had previously served as Kristen’s escape from life’s struggles, would become the driving force behind understanding her struggle with depression as well as raising awareness for mothers everywhere. Today, Kristen sits down with me from her home in Troy, NY, where she resides with her husband, Ellie (now four), and her beloved golden retriever Troy to discuss her journey. She reflects on motherhood, a personal tragedy that may have saved her life, and a campaign of advocacy that continues to grow with each mile. An enduring athlete, mother, and mental health warrior.

How long have you been running long-distance? Was this something that began as a personal health journey or has it always been a passion of yours?

Running has helped me through the best of times and the worst of times even when I was younger. Sure, the health benefits are always present, but I really do believe running helped me survive not only my first year of motherhood, but anxiety and depression as well. I was first diagnosed with anxiety and depression at the age of 21, and running has been an important form of therapy for me ever since. I have also been diagnosed with a rare eye disease called Uveitis, meaning I am beginning to go blind and have had four eye surgeries thus far.

I ran my first marathon in 2012 and I can remember one of the most rewarding aspects was the struggle it took to finish. At times, it felt as though it might take everything I had just to complete the next step – and the same can be said about chronic anxiety. Sometimes, stress piles up so badly that you feel like you can’t move and I have experienced plenty of those days. Running has taught me that you must put one foot in front of the other in order to reach the destination, its lessons have become my guide through life. It’s a healthy passion I suppose you can say, and running became my escape from the anxiety I experienced before and after I had my daughter.

Can you describe some of your experiences with PPD after you became a mother? Was it something you felt intuitively right away, or was it a struggle to understand what was happening after some time? Do you feel as though this form of depression is generally misunderstood or underrepresented?

It is actually a difficult question to answer because of how confused I was at the time. After I had Ellie I felt disconnected and sad, which made me angry. Society wanted me to be happy but more importantly I wanted to feel happy – but I felt absent. There’s a perception that a young mother feeling that way is acting selfishly and that only added to my depressive anxiety. I had no idea that I was experiencing PPD at the time and that became an inspiration for my advocacy later on.

Then, when Ellie was just six months old, I lost one of my best friends, Kristin, to postpartum depression. Kristen Nicole Thorsen was someone who I met while on my honeymoon and we just clicked immediately. It was almost as though I had met my long-lost sister. After Kristin’s passing, my bouts with anxiety, depression, and PPD became much longer and more frequent. I had nights of uncontrollable crying, mood swings like no other, constant fighting with my husband, lying flat on the ground unable to move for hours, and so many days feeling stuck and believing that it would never get better. Despite having a lot of anxiety before my pregnancy, after Kristin took her own life I was surrounded by thoughts of “Why her and not me?” I think that confusion is what makes PPD so misunderstood. Many people still don’t understand these feelings of failure and self-loathing are a symptom of postpartum depression as a medical condition. It isn’t a reflection of mine or anyone’s ability as a parent.

How did your experience with PPD affect your running lifestyle? Was it something you felt helped you mentally?

Running was a lifestyle for me as a young athlete and then as someone struggling with depression and anxiety in my 20s. After my experience with PPD (which can still be a struggle for me) and Kristin’s passing, running became the ultimate escape. When I participated in the Chicago Marathon I used my time during the race to escape my own mind and self-reflect. I came to the realization that I needed to fall back in love with myself before I could move forward and I decided to go to therapy soon after.

When I went in for my first appointment with my primary doctor, my anxiety was super high. Thankfully my doctor was so kind, welcoming, and understanding, as she had just become a new mom herself. This was a major step in the right direction at six months postpartum. I came to discover that the loss of Kristin ultimately may have saved my life, and I felt more connected to her than ever. I became drawn to the stories of young mothers and their struggles with everything from PPD to equitable maternity care. 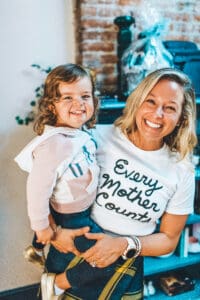 Eventually, for me, running became a part of a different lifestyle. One born out of the loss of a friend and geared toward determined advocacy. In May 2017, while I was still struggling with PPD, and just before losing Kristin, I decided to run a half-marathon to raise money for an organization I had discovered called Every Mother Counts (EMC). Since losing Kristin I grown a platform on social media so people could follow me through the highs and lows of my struggle in order to better understand Postpartum and see it up close and personal.

Every Mother Counts has become well known for securing respectful and equitable maternity care, what drew you to the non-profit? How have you been able to bring awareness to PPD through your work with EMC and other organizations?

EMC was founded based on the urgency of struggling mothers in society. Hundreds of thousands of women die every year because they do not have access to the maternity care that they need. That lack of support and understanding made me think of Kristin and it drew me in. Almost four years ago, I was able to host my own virtual Run to Believe in honor of Kristin’s memory while I continued raising funds for EMC. In the last three years, this race has raised over $13,700 for Every Mother Counts and I am so proud to be an ambassador for such a wonderful organization.

This year, I founded The Believe KNT Foundation with a goal to help raise awareness and make postpartum mental health care available for any and all mothers in the United States regardless of insurance, class, or race. The foundation is named after Kristin. Run To Believe is a run for all mothers and on May 8, we are encouraging everyone to grab their running shoes and head out anytime, anywhere. Post a photo on social media with their virtual race bib using #RunToBelieveKNT and #RunTeamEMC.

What do you envision moving forward with your ambassador work, your long-distance running, and your advocacy for mothers everywhere?

As we all know, this past year has been especially hard for those suffering from mental health issues. The Believe KNT Foundation was a huge goal of mine and, as a runner, I completed my first 50-mile ultra-marathon in November of 2020. There’s still so much work to do. Mainly to raise the general awareness surrounding motherhood and depression. I want to achieve a generational understanding when it comes to PPD. A future where the misconceptions of the past become permanently antiquated. Running is about struggle and determination and so is life – there is no shame in your struggle, there is no shame in telling your story. •

Follow Kristen’s inspiring journey on her Instagram @mellank. Register for May’s Run to Believe Virtual Run at www.moremilesraces.com/runtobelieve. To learn more about Every Mother Counts, please visit www.everymothercounts.org. All photos with this article are courtesy of Kristen Garzone.