What is it about the hamlet of Wassaic, NY, that has attracted industry and idealists for over 200 years? Wassaic’s Main Street is nestled in a valley between the Metro North Train line and the confluence of the Wassaic Creek and the Amenia Stream bordered to the east and west by mountains. It’s believed that the name derives from the Native American word Washiak meaning “land of difficult access.”

The iron and farming industry arrived here first, and the hamlet was thriving in the 19th century with the processing of iron ingots that were turned into artillery and the Borden’s condensed milk factory which supplied the Union Army during the Civil War. Milk, iron, cattle and grain were transported on Commodore Vanderbilt’s Harlem Valley Railroad. Two hotels housed managers, and visitors to the thriving hamlet. The mix of the economy changed after the Gridley Iron Works’ furnace shut down. The Tri-Wall box factory operating three shifts a day in the former Borden’s brick building closed and Maxon Mills went out of business. 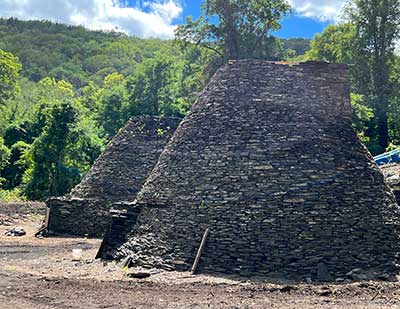 Route 22 bypassed the center of Wassaic in 1948 leaving “Old Route 22” as a quiet country road on the other side of the tracks. In 1972 Penn Central abandoned rail service north of Dover further cutting off the hamlet. During the 1930s the sprawling Taconic Developmental Disabilities Services Office (DDSO) opened and provided thousands of jobs for residents throughout the Harlem Valley. It was a huge blow to the regional economy when the DDSO closed its doors in 2014. Today over 740,000 built square feet of space stands vacant on the 320-acre site with magnificent views and infrastructure waiting for mixed use redevelopment to the south of the hamlet.

During these transitions the independent Wassaic Fire District, established in 1935, has survived as the soul of the hamlet providing help to residents including pumping out homes often flooded by the creek and emergency medical assistance. Today the fire company continues to welcome newcomers and offers an opportunity to serve the community. Calsi’s General Store and The Lantern remained open as the anchors of Main Street. Despite its history, this hamlet has attracted visionaries, industry and, more recently, restoration architects, community activists, writers and artists from all over the world.

The dilapidated former Borden plant, later the Tri-Wall box factory eventually became the property of the Town of Amenia, which sold it in 1992 for $500,000 to the Pawling Corporation. The privately held company which makes specialized architectural products invested over a million dollars in the historic property rescuing the 150-year-old building, sandblasting the brick, digging up 20,000 gallon buried oil tanks, repairing the chimney, and opening up the windows. The Pawling Corporation then donated a small park with historic signage, installed Victorian Street lamps, and brought back jobs.

Across Route 22, on Deep Hollow Road leading up to the Town of Washington, the unique Gridley charcoal kilns, initially owned and restored by architect Allan Shope, are now in the process of being donated to Dutchess County or the Town of Amenia as a park. The trees and plants that made it look like an undiscovered Mayan ruin have been cleared exposing a dramatic statement about the industrial past of Wassaic.

The restoration of Maxon Mills at the center of the hamlet as well as the Luther Auction Barns have transformed Wassaic into a contemporary arts destination. The towering seven-story grain elevator was moved and reconstructed in Wassaic when the area was still very rural. The huge chestnut columns were repurposed from piers in the East River in New York and the solid “cribbed” walls are constructed of 2” by 6” wooden boards stacked on top of each other.  The mill supplied grain to six surrounding counties and gradually went out of business as the farming industry in the area declined.

Led by Sharon Kroeger, a 501(c)3 was formed to save the grain elevator from being demolished as a fire hazard; however, funding for renovation was difficult and the tower and the former hotel were turned over to professional renovation real estate developers, Tony Zunino and Dick Berry, for the price of the fines the buildings had accumulated. At this point the abandoned buildings were in desperate shape. The roof was compromised and the interior was open to the elements.

Zunino and Berry began by removing the heavy iron equipment, emptying all the shoots of grain, and taking the buildings down to their structure. Stairs were rebuilt in the tower and rooms created. What now houses the Wassaic Project grew incrementally starting as a festival and exhibition space then expanding to other buildings, such as the renovated Luther Auction Barns, which were repurposed as artist’s studios. Other buildings, such as the Wassaic Schoolhouse, were purchased and renovated to provide housing for resident artists, which brought new faces and energy to the town.

The Lantern, previously the town dive bar, was resuscitated and became a place for artists to mingle with locals and maybe play a game of pool. Berry explained that the mission was to bring old buildings back to life to be enjoyed by families and children.

Newcomers made the difference

Individuals from other places helped preserve and renew the small hamlet. Perhaps the small scale made it seem possible. Former university professor Sharon Kroeger found that Wassaic was “a little bit of a secret.” Originally she brought her family to Amenia for the summers and then settled into a farm on Leedsville Road. Drawn to the hamlet, she purchased the Calsi’s General Store building at the town center and has kept it open for the last 25 years. Along the way she created a non-profit to save Maxon Mills and after ten years found a developer to take it to the next stage – today’s Wassaic Project.

Other residents started to arrive in the 1980s attracted to the down at the heel’s hamlet with charming, affordable houses. Tonia Shoumatoff and her artist husband, Joel Foster, bought their home on Old Route 22 in 1987 thinking they could make a difference in the small community. In the intervening years as a journalist Shoumatoff broke news, was co-producer of the World Peace Festival on Benton Road in Wassaic, headed the effort to extend access to the Rail Trail from the Wassaic Train Station to the hamlet, and also profiled the people and events in the area for the Millbrook Independent newspaper. Her fascinating book, Tales of the Harlem Valley, Life at the End of the Line, will be published next year.

Leo Blackman, arrived in Wassaic as a weekender in 2003 and, after retiring from his New York City architectural practice, became a full-time Wassaic resident actively involved in the Town of Amenia as a Town Board Member and has initiated and supported affordable housing for the town. Initially he was attracted by Wassaic’s industrial character, topography and landscape, but quickly became involved as a pro bono architect helping local volunteers restore the Gridley Chapel.

David Rosenberg and his wife Robyn are other transplanted New Yorkers who moved full-time into their house in Wassaic in 2015. “I grew up in the City. I had done everything my whole life in the City. I didn’t need it anymore,” said David. “I wanted to get involved in a community, and I have a much better chance of making an impact up here than in Manhattan.” He went through the time-consuming training to become a fireman, served on the Amenia Planning Board, and was a early board member of the Wassaic Project.

Then there are the young co-executive directors of the Wassaic Project, Eve Biddle, Bowie Zunino, and Jeff Barnett-Winsby, with their own vision for the community bringing contemporary art and artists to the hamlet and sharing their creative enthusiasm with public schools in the region. The mission of the project is simple; to use the arts and arts education to foster positive social change.

Dave Luther, whose family owned and operated the Luther Auction Barns, grew up in Wassaic when it was a busy farming town with weekly auctions of everything from eggs to farm equipment, an IGA grocery store, and jobs at the DDSO and box factory. He watched as farms were sold, jobs disappeared, and the hamlet declined. The Wassaic Project changed everything. “Used to be that I knew who lived in every house, but that’s not true today.” Luther is pleased that the hamlet is busy again. “When buildings are empty, they die. Our family’s barns have been repurposed, not changed. Everyone that lives here appreciates the Wassaic Project. It has brought the hamlet back to life.”

People are no longer embarrassed to say they live in Wassaic. It’s a cool place. Day trippers arrive at the Metro North Station opened in 2000 and walk or cycle into the hamlet on the Trail to the Train that connects to the Harlem Valley Rail Trail. It’s a quick drive over the state line from Kent or Sharon, CT, and a great place to eat after visiting nearby 10 Mile Distillery. There are still buildings available for restoration. While you’re there, sit around a fire pit at the Lantern’s casual outdoor dining area, check out what’s happening at the Wassaic Project, or drop by Calsi’s General Store on Main Street, and talk to Sharon Kroger about the community. 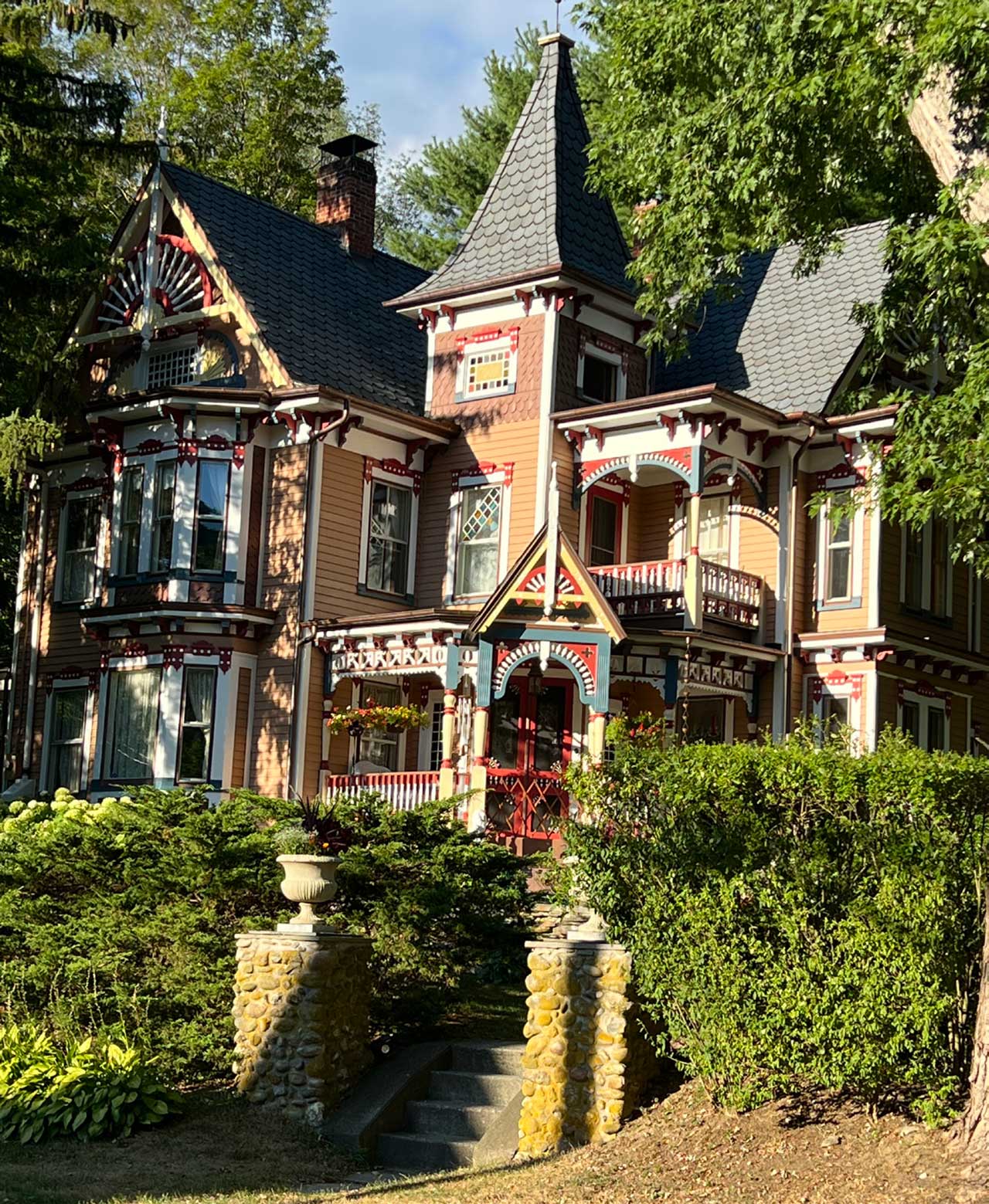