Alive With The Sound of Music

There has long been the contention that nestled in the Litchfield Hills, the Berkshires and the Hudson Valley, there are literally armies of brilliant writers, artists, musicians … most of whom found their separate ways to this bucolic part of the country to find the calm and quiet that allows creativity to blossom.

And so, Sharon Ruchman came to the area with her physician husband some years ago and allowed the creative energies of composition and performance to flourish. For some, age points to retiring – slowing down – sitting back and letting the world move on while they watch.

Not so for Sharon Ruchman.

“This past year has been really productive for me,” she offers with the energy of an artist caught up in the rollercoaster ride choreographed by a very active muse. “I’ve been composing new material, becoming more fully engaged with the music and getting ready for Sonoro to have its first in-person performance in a while.”

Sonoro is an eclectic group of very talented, very seasoned musicians who have gathered around Sharon, CT, to create a musical genre that is, likewise, very eclectic. “There’s a classical foundation, of course,” Sharon offers by way of explanation. “But we add some strong jazz influences, some deep blues and a flavoring of Latin rhythms. We’ve been fortunate enough to attract an intriguing audience – the age range is 20-45 – as our performances are included on social media playlists.”

The appearance of Ruchman’s work with Sonoro on Spotify and other sites is thanks to the album Simply Sonoro released in 2020. With all original compositions by Ruchman and a stellar assembly of musicians produced and recorded by Marc Wager Weisgal at his Roxbury, CT, recording studio, the “genre bending” recording continues to gain new devotees.

A lifetime of music

Sharon Ruchman’s journey began with  composing melodies on the family piano at the age of five, and blossomed through voice training and music lessons that took her through the New England Conservatory of Music and the Yale School of Music. Performance was primary, but composition was also an important part of her maturing.

A casual scan of the albums created by Sharon Ruchman on Amazon reveals an ample cross section of her life-long engagement with performance. No fewer than six solo albums are available, with titles that announce a range from Chamber Music, A Bit of Tango and More.

With a prolific recording career that came as the result of comprehensive training in performance and composition, being a celebrated musician would, for some, be a satisfying, complete career.

Then, there was the presence of Rudy.

The Gift of Rudy

“I had a great uncle, Rudolph Fuchs, who was a legendary violinist, and who died, tragically at the age of 25. There were only two recordings of his work ever made, and I’ve been fortunate through endless searching and a great measure of luck to obtain one of them.” The 1929 recording of Berceuse performed by Nicholas Vasilieff accompanied by Rudolph Fuchs can be heard on Sharon Ruchman’s website (sharonruchman.com) as can selected excerpts from Simply Sonoro. 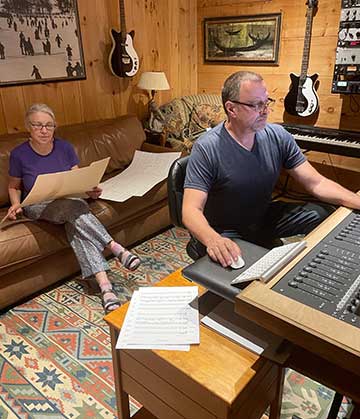 Her reflections of the expected celebrity of her great uncle were not misplaced. Rudolph Fuchs died in 1930 when the plane in which he was a passenger crashed into Lake Michigan. His intended destination had been the Chicago World’s Fair and the opportunity to perform for an international audience.

The experience of having the spirit of her great uncle a constant presence in her musical career has had several dimensions. First, there was the arrival of sheet music and photos. A distant relative discovered Rudy’s library of photographs and sheet music and shared it with Sharon, which began a furtive search to learn more about the man.

Through the simple formula of hard work, Sharon was able to locate Rudy Fuchs’ first viola, an instrument crafted in 1920 and engraved to the budding musician. Then there was the outreach to find the recordings. Bit by bit, the information and supporting documentation piled up in Sharon’s office until it became apparent that there was a book to be written. The Gift of Rudy is available on Amazon.

The journey goes on

It is certainly a tribute to Sharon Ruchman’s comprehensive love for and understanding of music that is currently manifesting itself in the work of Sonoro. The artists she has assembled to create the unique sound represent widely diverse but consistently excellent resumes.

Saxophone and trumpet player Bill Holloman has played behind Bruce Springsteen, Paul Simon, and Elton John, among many others. Frank Brockelhurst plays both acoustic and electric bass as he has in support of a variety of music’s elite covering Brazilian, Funk, Salsa, R&B, Country Rock and Jazz.

Percussionist Ryan Dunne is both a musician and an educator with strong roots in western Connecticut. The classical undertones of Ruchman’s compositions are brought to life by Jill Pellett Levine, a violist who plays with the Bridgeport, Waterbury, and New Haven Symphony Orchestras. Jennifer Berman, flutist, has performed internationally with symphony orchestras, lyric opera companies, and as a featured soloist.

Sonoro is completed by cellist Mary Costanza, a Julliard-trained performer who has appeared widely with prominent orchestras, received critical acclaim for her album of J.S. Bach Cello Suites and teaches at both the Kent School and The Gunnery in Connecticut.

And for our next selection…

For a working artist, whatever the medium, the question of “What’s next?” is always appropriate. For Sharon Ruchman, the answer comes quickly and decisively. “We can’t wait to get back out and perform.” The magic of in-person performances with audiences showing their appreciation as immediate response is the energizing spark that encourages and sustains. “Music allows everyone to feel and examine the emotions. It touches the heart. It tells a story … and it lingers in the heart.” Sharon’s constant motivation is to provide something for her audience to connect with – to relate to. “I want it to linger in their minds as a vibrant memory.”