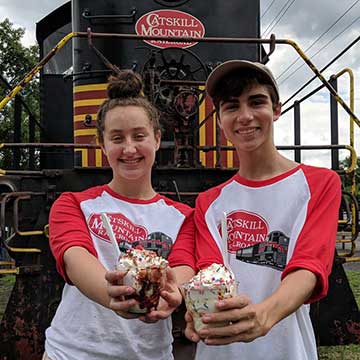 Kingston, NY, is renowned for many things. Most noteworthy, it served as New York’s first capital in 1777. After the Battles of Saratoga, the riverside city was burned by the British on October 16, 1777. In the 19th century, Kingston became an important transport hub after the discovery of natural cement in the region. The picturesque town is also known for its railroad and canal connections.

Kingston is also home to the Catskills Mountain Railroad (CMRR), which has a long and varied history in the region. CMRR currently leases 4.5 miles of track in Kingston on the former New York Central Railroad Catskill Mountain branch, which ran from Kingston to Highmount. Enticing events are offered year-round.

It all began when shipping magnate Thomas Cornell envisioned a railroad connecting the Great Lakes with the Hudson River. His plan involved transporting passengers and cargo year-round and opening the interior of New York State. Cornell brought his dream to fruition, thanks to the wealth he created by operating a fleet of steamboats along the Hudson River.

In 1875, the Ulster & Delaware Railroad took over and set its sights on further expansion. In 1881, a narrow-gauge branch was built between Phoenicia and Hunter. The connecting Kaaterskill Railway was acquired in 1892, extending the line all the way to Tannersville.

Beyond transporting freight, the trains whisked tourists to and from the scenic Catskills region. As one of the first all-weather routes into the Catskills, the trains brought thousands of vacationers to the grandiose hotels and boarding houses that dotted the region. The rail was also used to deliver fresh dairy products from local farms into Manhattan. Bluestone for the sidewalks of New York was also quarried here.

Between 1908 and 1912, the railroad played a key role in carrying supplies for the construction of the Ashokan Reservoir – part of the system of reservoirs that feed New York City. By 1913, more than 676,000 passengers rode the rails to the Catskills.

The end of independence

Another chapter began when the New York Central Railroad began looking to consolidate several of its leased railroads in the Midwest. Regulatory authorities prevented this from happening.

Although the Ulster & Delaware didn’t necessarily fit in with New York Central’s overall plan, it agreed that this was a small price to pay to solidify its position in the Midwest. A milestone was reached in 1932 when the Ulster & Delaware was purchased. The new venture was named the Catskill Mountain Branch.

A slew of changes followed. New York Central immediately downgraded the Catskill Mountain Branch, reducing speeds on the main line from 60 to 30 mph. The branches to Hunter and Kaaterskill also slowed down until they were finally dismantled in 1940.

The railroad yearned to eliminate all passenger trains, but that plan was temporarily scrapped as World War II raged on. By 1946, service was reduced to one round trip daily. In 1954, the US Postal Service withdrew its mail contract and New York Central was granted permission to terminate passenger service. On March 31, the last train made its journey.

Throughout the 1960s, the Catskill Mountain Branch continued to operate as a freight hauler. Construction of Interstate 88 through Oneonta severed the west end of the line from its connection with the Delaware & Hudson Railway. In 1965, service was cut back to Bloomville. By this time, the major source of traffic was feed and lumber dealers at Arkville, Roxbury, Grand Gorge, and Stamford.

After 1968, the New York Central and Pennsylvania Railroads merged to form Penn Central. No longer regarded as a priority, the Catskill Mountain Branch and the condition of the rails deteriorated. Unfortunately, repairs were postponed, and derailments were frequent. Eventually, service was reduced to one weekly trip. Due to slow speeds imposed by the track conditions, the freight trains often took days to cover the route.

In an attempt to rebuild rail service in the Northeast, SEPTA, New Jersey Transit, Metro-North Railroad took over Penn Central and six other bankrupt railroads in April 1976. The Catskill Mountain Branch was not included in the new system, so New York State arranged a six-month subsidy to have Conrail operate the line while shippers made new arrangements.

The last freight train departed Kingston on September 28, 1976, and didn’t return until October 2. Every remaining freight car on the branch was collected for the final return trip. The switch was spiked shut and the future of the line was uncertain.

Many people in the area had a deep appreciation for the trains and their history. Communities along the line called for the railroad to be saved, but the estate of Penn Central disagreed over the financials. In 1977, William F. Buckley, Jr., a well renowned columnist and media personality toured the line and helped rally for this important cause. Luckily, in 1979, an agreement was finally reached. To preserve the corridor along the 38-mile segment from Kingston to Highmount, Ulster County took ownership of the line in lieu of back taxes.

In 1983, great strides were made. The Catskill Mountain Railroad was chartered to operate a new tourist passenger operation and limited freight service from Kingston. Passenger trains started in Phoenicia. In 1987, the railroad suffered a major washout at Campground Curve, but it was repaired by CMRR volunteers and the NYS Department of Transportation. Together, they rebuilt the bank to protect Route 28. Additional diesels and coaches were acquired as they eyed expansion.

After years of negotiation, the railroad crossing at Route 28 was reopened in 2004. As momentum was building, a catastrophic flood damaged the CMRR’s Phoenicia yard, equipment, and the railroad. Volunteers responded as they worked to extend the Scenic Train from Mt. Pleasant (which was renamed Mt. Temper) to Cold Brook in 2007. Refocusing their efforts in Kingston, the City Shuttle was launched in 2008.

In 2011, tragedy struck again when Hurricane Irene unleashed devastating floods. Once again, Campground Curve was washed out and the Boiceville Trestle was lost. Although there was significant damage to Phoenicia, the railroad equipment was spared since it was moved into storage before the storm. Two weeks later, passenger trains resumed on a reduced schedule. Due to numerous washouts, service to Cold Brook station was suspended.

In 2012, volunteers repaired and reopened Bridge C9 over the Esopus Creek in Kingston. Themed events such as the Easter Bunny Express, Great Train Robbery, Peace Train, Rails of Terror, Catskill Fall Flyer, and The Polar Express were introduced to great delight. Unfortunately, in 2016, CMRR terminated more than 30 years of service between Phoenicia and Mt. Tremper when the lease for that segment came to an end.

Better days are here. Excursions abound and there are lots of reasons to hop a train from Kingston. Through September, visitors are welcome to explore the natural beauty of the Catskills from a unique vantage point – aboard Ulster County’s scenic train. The Catskill Flyer offers train enthusiasts and other day trippers a journey through some of the oldest farmlands in the country. The CMMR uses a historic 1950 Alco RS1 locomotive and a combination of open-air flat cars and coaches to whisk guests across the rails into the Esopus creek via the restored C9 bridge. It then runs through the Hurley Flats and climbs Hurley Mountain. All trips operate round-trip and depart from the Westbrook Lane Station.

Calling all ice cream enthusiasts. Indulge in a delicious ice cream treat as you take in the serenity and stunning vistas of the Catskills from the railroad’s scenic train. The ice cream express takes place on the same historic locomotive and open-air flat cars and coaches (mentioned above) and takes the same route as the Catskill Flyer trip (also above). All trips offer hour-long, round-trip rides. All trains depart from the Westbrook Lane Station, which is in the Kingston Plaza adjacent to Uptown Kingston’s Stockade District in the historic City of Kingston. Plenty of free parking is available.

The CMRR is currently asking its landlord, Ulster County, for permission to extend its operable track another two miles to MP 10 at Basin Road where the corridor was converted to the Ashokan Trail. It aims to build a new station there. The new station would enable passengers to combine their train ride with a short walk or bike ride for access to the Ashokan Rail Trail – a 11.5-mile recreational trail that runs along the Ashokan Reservoir between West Hurley and Boiceville. It would also give the CMRR a proper destination.

Many of Kingston’s older buildings are part of three historic districts, which include Uptown Stockade District; the Midtown Neighborhood Broadway Corridor; and the Downtown Rondout-West Strand Historic District. There are lots of places to explore.

For more information about the Catskill Mountain Railroad, you can call (845) 332-4854 or visit them online at www.catskillmountainrailroad.com. 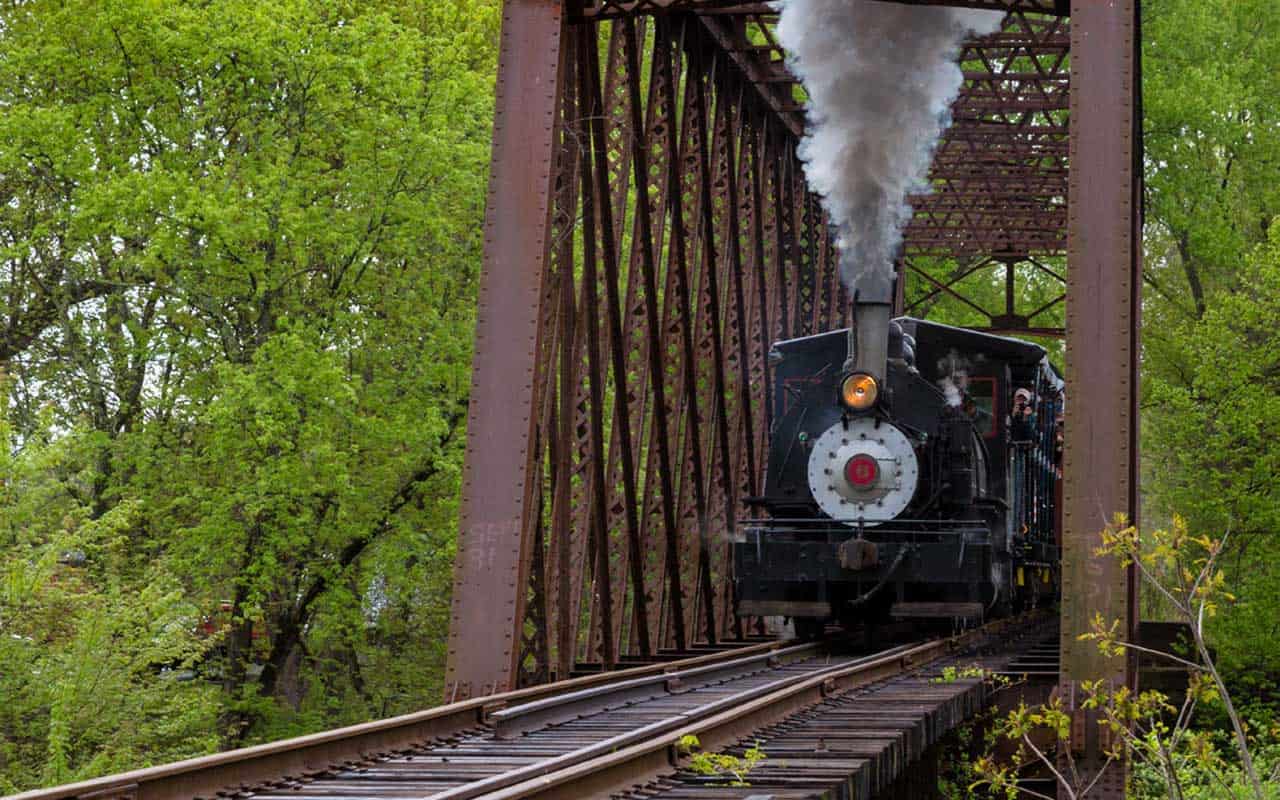