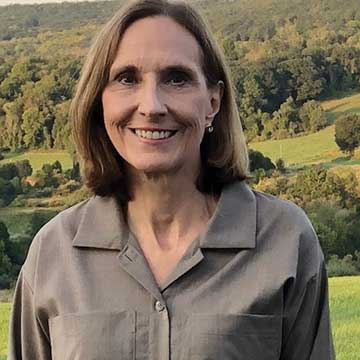 The phrase ‘Truth and Justice’ has lost some of its luster in today’s lexicon, more a pop culture artifact evocative of a titular comic book hero or a serial crime drama than the foundation of our American legal system. In the year 2020, the once-canonized notion seems to be even further mired in cynicism – with more than a few justifications – in a world of social media barrage and divisive discourse. Still, the embers of that notion remain alive in many of our local town courts, the gateways to New York’s court system.

Catherine Redlich, Ancram, NY’s elected Town Justice, embodies the belief that truth and justice remain at the heart of the judicial system, and are achieved less by swinging her gavel and more by making clear to those who appear before her that justice will be delivered even-handedly and with compassion. Ms. Redlich sat down for a quick chat detailing her journey to the Hudson Valley, her extensive experience in criminal law, and how she and her husband have teamed together to facilitate changes in New York’s foster care system.

How did you wind up attending law school and going into criminal law? Am I correct that it was not a common career path for women when you were in college?

I actually set out to work in book publishing after finishing my master’s degree in English literature at the University of Michigan. I have always loved to write and probably knew from the time I was in third grade that my career path would involve writing. My first job was as a writer for Ford Motor Company. I authored a book for Ford called Car Buying Made Easier, which still makes me laugh because my ignorance about cars is unparalleled. Twice I have driven someone else’s car home from a parking garage in NYC without noticing – I just took the keys from the attendant and set off.

After Ford I worked for a publishing company in Boston, and then did a stint as a ghostwriter for some academic authors. But in the back of my mind was a conversation I had had with an undergraduate English professor who called me in after class and said I should consider law school. This was probably around 1970, and I didn’t know of any women who went to law school, much less any women lawyers. Not to mention I had terrible anxiety about public speaking and being called on in class, so when the movie the Paper Chase came out in 1973, that scared the wits out of me.

Still, I had come to realize that any upward path in publishing meant getting away from what initially attracted me … working directly with language and authors. I wasn’t interested in the business end of publishing. So I started to explore law school and was lucky enough to be accepted at Harvard. At that time, the number of women at Harvard Law School was still quite small, less than a fifth of the class were women, and criminal law was not a career that Ivy League law schools promoted or trained you for. But I went on to clerk for a wonderful federal judge in the Southern District of New York for two years, and it was while there that I became interested in complex criminal litigation. It combined all my passions – fascinating personal stories, the psychology of what motivates people, complex constitutional issues, and helping clients at a time of crisis in their lives. Plus persuasive writing skills were crucial.

Has there been a significant change in the culture of criminal defense since the time you graduated from Harvard and passed the bar in 1983 versus the present?

Yes, definitely. Back then, white-collar crime was a specialty of only a few boutique firms in New York City. It was many years before it became a sort of glamorous line of work, and former federal prosecutors, some of whom would have turned up their noses at criminal defense, began flooding the big firms seeking to do criminal work. And big firms embraced the work because more sophisticated investigations and prosecutions were being launched by the US Attorney’s Office, and the targets – often financial firms and large corporations – could afford to pay for representation. I eventually co-founded my own firm so that I could continue to represent individual clients versus corporations or entities.

Another big change is that, when I started out, there were virtually no women partners at criminal firms, and hardly any female federal judges. I became the first woman partner at my firm. Interestingly, as a young lawyer observing my male colleagues, I came to believe that women were particularly well-suited to the defense profession. Most of us didn’t feel it necessary to pound our fists on the table when meeting with a prosecutor, and our adversaries didn’t need to be our enemies. If the government begins to dislike you personally, that will invariably spill over adversely onto your client. I also think women are naturally good listeners and can develop a level of trust with clients that leads to a better understanding of the circumstances of a case, and the ability to portray that individual to prosecutors and judges in a nuanced light. I should add that I have always respected prosecutors and viewed them as the other side of an equation essential to a fair criminal justice system. If you have smart, compassionate and ethical people on both the prosecution and the defense side, the outcome is likely to be a correct one. Not always of course!

In 1986, along with your husband Rob Horwitz, you founded the Redlich Horwitz Foundation (RHF). Since then, the foundation has supported initiatives in a wide variety of areas, from education to drug policy. Can you tell me a little bit about the inception of RHF and how the foundation has focused its efforts today?

Sure. We set up the foundation when we were first married to support various not-for-profit organizations working in areas of interest to us, but we were a bit scattershot in our giving, not to mention we had limited financial wherewithal. Over the years, as the foundation grew in size, we realized that to have a significant impact, we needed to focus our resources on one area of interest and become sort of experts in that field. I completely credit my husband with that realization and the strategic know-how to move forward.

We hired an executive director and began to look closely at problem areas in New York (where we had now moved). Foster care policy and practice rose to the top of our list. At that time, we were stunned to learn that New York State was 48th out of 50 states in time to permanence– meaning the length of time a child spends in the foster care system before being adopted or reunified with its birth family. We also learned that far too many children wind up in residential care facilities rather than in foster homes, and that children often age out of the foster care system with no adult connections. It is not an exaggeration to say that every child who experiences the foster care system invariably suffers trauma that impacts them for the rest of their lives.

The Foundation now works with grantees in 24 upstate counties as well as in NYC. It also holds annual convenings for foster care professionals, and publishes on pertinent topics. Rob and I are both licensed foster parents in Columbia County. During the current pandemic, my hat is way off to child welfare professionals who are working tirelessly and innovatively to keep foster kids safe and connected to their families in this crisis.

How did you find your way to the Hudson Valley and become involved with local organizations like the Ancram Opera House?

We always knew we would move to a more rural area. I grew up in Illinois and spent my summers in Wisconsin farmland, so this area felt immediately familiar to me. And my husband, who started out as a bicycle frame builder, was thrilled at the prospect of riding his bike for miles without seeing any cars. So as soon as our youngest was reaching the end of high school, we sold our house in a New Jersey suburb and built a home for our family in Ancramdale. We have lived here for ten years.

It is easy in this community to become involved if you want to. I have enjoyed working with the RoeJan library, serving on the board of the wonderful Ancram Opera House whose mission is to build community through storytelling, editing the Ancram Town News, and participating on various town committees. There are so many dedicated, skilled, and generous people in Ancram that I am always learning from. When I was knocking on doors while running for judge, people often took the time to show me something – their collection of clocks, their backyard beehives, their vegetable garden – and I would benefit from their knowledge.

How would you contrast your experience working in private practice to holding the position of Justice in a town court?

Wow! There are so many ways to answer that. Being an advocate for a client is quite different from being a jurist whose role is to be completely unbiased. I try to get that message out to people – a judge’s political or social views should never be a barometer of their fitness to be on the bench. When I was campaigning, I would be asked questions like, “Do you believe in abortion rights?” or “Do you believe in gun rights?” I would explain that the important question is: “Do you believe in the rule of law?” In other words, do you believe that laws must be fairly applied and enforced by competent, independent judges who are able to set aside their personal views. I am actually sorry that town judges have to run for office as part of a political party, because it sends a confusing message to voters as to a judge’s role, which is not to carry out the mandate or platform of any political party.

My legal background has been enormously helpful to me as a town judge, especially in criminal matters and procedure, but I had to get up to speed on civil matters that come before a town court, such as eviction proceedings, small claims, and traffic offenses. I am also fortunate that my co-judge, the Hon. George Wittlinger, Sr., has been on the bench for twenty years and has been a generous resource. I have spent most of my career in federal courts, some in NYS state courts, but town courts are unique in a number of ways. First, most individuals appear unrepresented, so I have made it my practice to speak at the beginning of court night to explain the procedures, inform non-English-speaking individuals that we can provide an interpreter, advise people of the right to counsel, and just generally make folks feel comfortable in a situation that might be intimidating. Second, the town court is probably most people’s first encounter with the justice system, so I try to always be mindful that I am responsible for their first impression. I want everyone who appears in our court to feel that they were treated fairly, respectfully, and that, whatever the outcome, it was just one. •